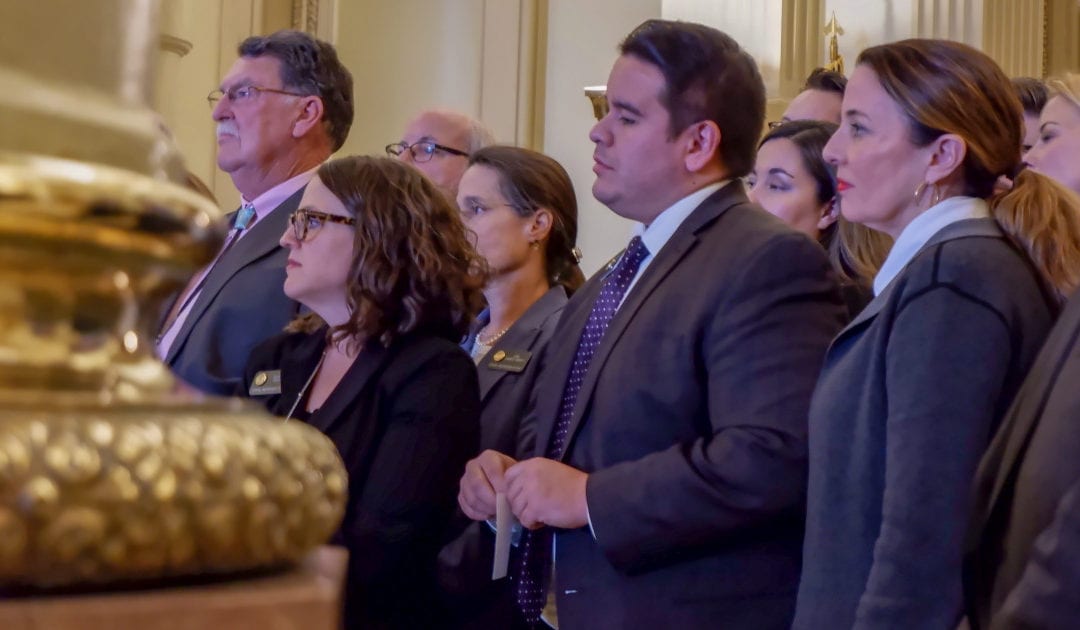 Two weeks after she tested positive for COVID-19, Brandi Axelsen is still waiting for her symptoms to subside so she can return to work.

The licensed psychiatric technician works for the state of Colorado and contracted the disease on the job helping clients with developmental disabilities.

Her state-paid sick days expired and she now must use personal leave, but she’s thankful to still get a paycheck. Her husband lost his job. Now she hopes the state doesn’t cut her pay — or worse furlough or eliminate jobs — to balance the budget deficit.

“I’m very worried,” the 34-year-old Axelsen said. “I know we are in a pandemic, and budget cuts need to be made, and it’s worrisome for me and my family.”

Colorado lawmakers on Monday restarted work on a state budget with a shortfall estimated in the billions of dollars amid the coronavirus, and the list of potential spending cuts has the 39,000 state government employees bracing for the worst.

The Joint Budget Committee — which took a six-week break amid the coronavirus — began slicing spending and later this week plans to eliminate a 3% pay hike for most state employees that it approved before the pandemic to save $72 million. Other plans for larger salary boosts in certain divisions are likewise on the chopping block.

In addition, the budget writers will consider a move to reduce the state’s payments to the pension system — known as PERA — by 2.5% and ask government employees to pick up the tab.

One other option for lawmakers is taking $33 million from a fund for state employee merit-pay increases and using it to fill the budget hole.

Hilary Glasgow, the executive director of Colorado WINS, the union for state government employees, said her members are on the front lines of the effort to fight the coronavirus and can’t take a pay cut, furloughs or layoffs.

“We are not tone deaf to the fact there is a fiscal crisis right now — public employees understand that,” she said. “They understand that they are at the whims of government and taxes and budgets. But there is a line where it’s a lot to ask of people who really create the human infrastructure of running a state like Colorado.”

State employees took the brunt in the past

In the two prior recessions, state employees felt the pain when it came to budget cuts.

The recession that hit in the early 2000s led Republican Gov. Bill Owens to implement a hiring freeze and reduce state services. Democratic Gov. Bill Ritter did the same amid the Great Recession but went further, adding furloughs for executive branch employees. The legislature also approved measures to require state employees to cover part of the state’s contribution to the pension system for two years.

This time, Gov. Jared Polis is trying to avoid hurting state employees. In his first executive order slashing spending, the Democratic administration said no furloughs or layoffs would come before July 1. “I’m proud the state was among those that at least for these few months was able to avoid furloughs and layoffs,” Polis said Friday during a briefing on the coronavirus.

Polis didn’t directly answer a question about whether he could avoid them in the next fiscal year. And Colorado lawmakers acknowledged it remains a possibility, particularly if the economic situation worsens. In budget briefing documents, nonpartisan analysts suggested a 20% reduction in tax revenues likely would require cuts to personnel to balance the budget.

“It’s going to be really hard to avoid when you’re looking at cuts this deep, this fast and such abrupt changes to ongoing programs,” House Speaker KC Becker, D-Boulder, told reporters.

The legislature — which returns in full May 18 — is considering whether to declare a fiscal emergency, a move that adds flexibility in how to spend and cut money. If approved, it also would allow the governor to order layoffs, furloughs, a freeze on hiring and salaries and more.

Sen. Bob Gardner, R-Colorado Springs, said the state shouldn’t treat its employees any differently from local governments and the private sector. “I think one of the things we have to look at is how we are staffed in state government. Because while we are not a business, we are dependent upon the revenues of business,” he said.

In Colorado, some local governments began implementing furloughs in April. In Boulder, 737 city employees were furloughed from April 20 through June 28. Most of them — 562 — are seasonal workers, but another 175 are full-time employees.

Josette Jaramillo, the lead foster care case worker in the child welfare office in Pueblo, said “if there is shortage of funding, it’s going to put stress on an already stressed situation.”

Government employees demand federal help and look for other cuts

The unions that represent state and local government employees want Congress to pass a bailout plan. The American Federation of State, County and Municipal Employees, which represents local government workers in Colorado, said it would begin a television advertising campaign across the country to push for additional federal money.

Jaramillo, an AFSCME member, said front-line government workers deserve hazard pay, too. “It would feel like a slap in the face to people who are keeping communities running to then have to bear a financial hardship,” she said.

Axelsen, the state employee who is quarantined in the basement of her Arvada home, forced to video chat with her children upstairs, said government workers know the budget risks that come with the job.

And more than just push back, state employees want to help identify areas to cut the budget in ways that won’t impact the rank and file. The state employee union says it’s talking with the Polis administration to develop options.

“We have some of the best minds in the union across America … looking at options within the Colorado budget of things we can bring to the table,” Glasgow said.

“The state cannot afford for the personnel in the state to get cut any deeper, so we have to figure something else out,” she continued. “There has to be another option.”