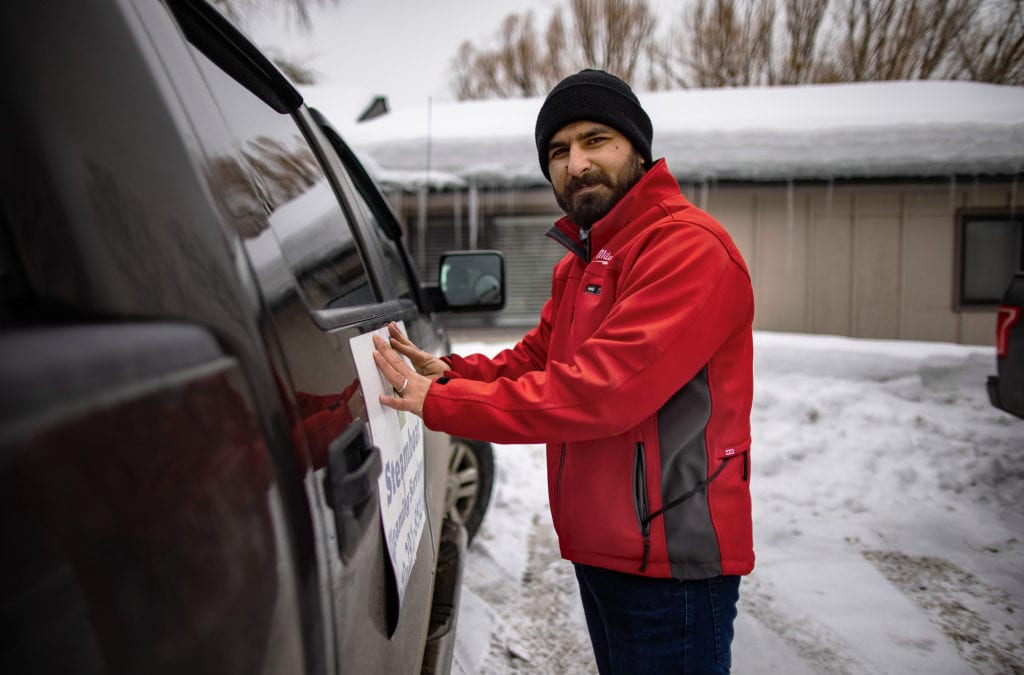 Abdallah Batayneh sensed a business opportunity while working at a mountain hot springs resort outside Steamboat Springs, where he says customers grumbled about the cost of existing shuttle services and voiced other complaints.

Provided by Institute for Justice

Abdallah Batayneh, of Steamboat Springs, is suing the state of Colorado over legal requirements for common-carrier permits. He was denied one for a shuttle service to Strawberry Park Hot Springs in 2020. He is standing next to a truck he uses for his cleaning business.

So he put together a plan. He’d start up a single-van service to compete with the two existing providers. And he’d charge less than they do to ferry customers to Strawberry Park Hot Springs, which is in a remote area at the end of a rough, unpaved county road that gets dangerously slick during winter.

But Batayneh’s startup ran aground last fall when a state regulatory commission decided that, even though he was capable of operating such a service, he failed to prove there was a need for more competition — or that the existing services were inadequate enough.

Lawyers working on Batayneh’s behalf plan to file a lawsuit Tuesday against the Colorado Public Utilities Commission to challenge the constitutionality of the state law used to deny his permit application.

The statute requires the PUC to weigh those competitiveness factors, in addition to the applicant’s own fitness to operate a common-carrier service.

“I gave them all the information they needed,” said Batayneh, 34. “At the end, I said that whatever I do, they’re not going to give it to me. I got denied to protect another company.”

Whether potential competitors should have a say in a new applicant’s entrance into a market is the issue at the heart of the case, says the Arlington, Virginia-based Institute for Justice. The libertarian public-interest law firm is filing the suit in Denver District Court, and it contends the state law, which requires evaluation of the “public convenience and necessity” of a new service, violates the Colorado Constitution’s guarantee of due process.

The lawsuit cites research showing that in the last five years, common-carrier applicants who faced opposition almost always were denied, unless they accepted competitors’ suggested modifications.

As of last June, 174 common-carrier permits were active in Colorado, according to PUC data. Colorado law treats the common-carrier market, which includes call-and-demand shuttles, taxis outside larger cities, sight-seeing buses and charters, under a “regulated monopoly doctrine.”

The rationale, as explained in the PUC recommendation to deny Batayneh’s application, is that the public will receive “safe, efficient and more economical service” if the number of carriers providing similar service is limited so that each can make a reasonable profit. Stretching the market between too many competitors “ultimately results in a deterioration of service and higher rates for the public,” administrative law judge Melody Mirbaba wrote in October.

Will Aronin, the institute’s lead attorney on the case, countered: “What they always say is that if you let another company in, it’s going to be a race to the bottom. But the truth is that never actually happens.”

The Institute for Justice has taken up similar challenges of permit regulations across the country. In Colorado, it has filed challenges of laws limiting entry to Denver’s taxi market since the 1990s. In that sector, state lawmakers in recent decades have relaxed restrictions that were similar to the ones common-carrier applicants still face.

Daniel White, whose company, the Hot Springs Shuttle, already provides service to Strawberry Park, said his three vans have had plenty of unused capacity in recent years, especially during the pandemic. He charges $50 per person for adults, a rate that includes the hot springs’ $20 admission.

Batayneh planned to charge $15 per person for a shuttle ride, without including admission — a competitive rate that he said would save families or groups substantial money.

During the winter, many hot springs customers brave the county road, which beyond a certain point requires that vehicles be equipped with chains or snow tires. The result during snowstorms is often road carnage as ill-equipped cars slide off.

The PUC decision rested on the hearing officer’s evaluation of evidence that included assertions made by Batayneh, White, and their backers about traffic on the road, the level of demand for another shuttle and the effects it might have. Ultimately, she wasn’t convinced another was needed.

Batayneh, a Jordanian immigrant who is now a U.S. citizen, has a wife and baby and said he saw the new service as an opportunity to augment his income in the resort town.

He also operates a cleaning business on the side. He expressed frustration at the barriers to a new shuttle business.

“It shouldn’t be that difficult — for anybody, not just for me,” Batayneh said.

The lawsuit contends that Colorado law still improperly “affords the existing private companies a de facto veto over their would-be competitors” in the shuttle market.

“In other words,” Aronin said, “it’s not the government’s job to pick winners and losers in the marketplace. That’s the customer’s job.”