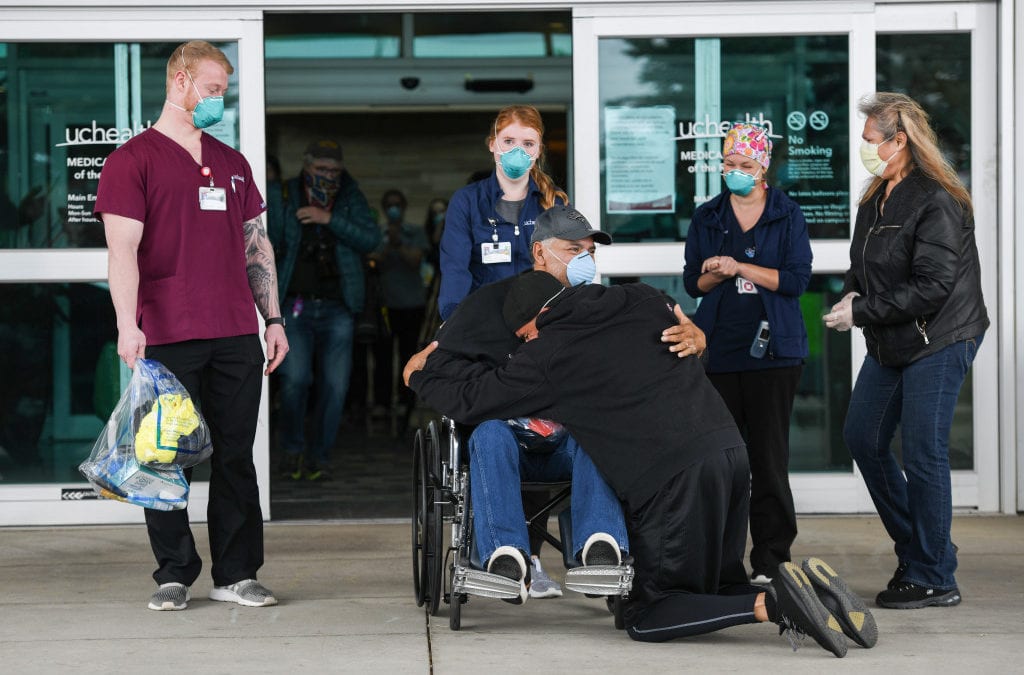 Crystal Rodriguez fell to her knees.

Her mother and brother joined her, and together they prayed in the hospital parking lot, facing the building. Inside, Rodriguez’s father, Sergio, lay in an intensive care unit.

Nurses had warned the Rodriguezes they may need to prepare to say goodbye to the 58-year-old man they couldn’t imagine living without. He’d contracted COVID-19, the respiratory disease caused by the novel coronavirus, two weeks earlier and became so ill, he was placed on a ventilator at the Medical Center of the Rockies in Loveland.

“I couldn’t stop crying,” Crystal Rodriguez said. “It was the worst thing ever.”

Latino residents, who make up about 20% of Colorado’s population, are becoming sick with the coronavirus at a disproportionately high rate, accounting for almost one-third of the state’s cases. And at least in Denver, they  are hospitalized more than any other racial or ethnic group, according to data from the state and city public health departments. The numbers point to a pattern that people of color — including black Coloradans who are dying at a higher rate than their share of the population — are seeing elevated infection rates.

Although health experts caution the data is incomplete, they say long-standing societal, economic and health disparities are among the reasons the coronavirus is infecting people of color at higher rates.

“You’re talking about decades of leaving behind communities of color, leaving behind the most marginalized of us,” said Karla Gonzales Garcia, policy director of the Colorado Organization for Latina Opportunity and Reproductive Rights. “Now, this pandemic is just putting, in the faces of everyone, the inequities that exist in our state.”

Advocates worry about increased risks to people of color, but it’s difficult to analyze all contributing factors without widespread testing, tracing and more data on individual cases, said Dr. Lisa DeCamp of the Latino Research and Policy Center at the Colorado School of Public Health.

“We are concerned about the number of people infected in Colorado and across the country,” she said. “We don’t have much information on the baseline.”

Without detailed demographics and background information on where people may were infected, experts can’t know exactly how much of a role biological dispositions, underlying health problems, economic factors or social factors played in cases, DeCamp said.

On March 20, when Sergio Rodriguez left the JBS meatpacking plant in Greeley where he has worked since he was 18, he was obviously ill.

His daughter, Crystal who also worked at JBS, was scared because  coronavirus appeared to be spreading throughout the plant. She was afraid for her dad but also for herself and her son. Her mom watched the boy while Crystal worked.

At his doctor’s visit, Sergio was told he likely had coronavirus, but he couldn’t get tested and should quarantine. The rest of the family did, too.

A week later, Sergio ended up in the emergency room. His COVID-19 infection was confirmed and he was admitted.

There have been delays in testing for the virus because of a national shortage of supplies, resulting in an initial backlog in the Colorado state lab. As a result, testing has mostly been limited to those hospitalized, health care workers and individuals most at risk for complications.

“We’re not seeing comprehensive data in terms of testing and who is getting testing,” said Dr. Richard Besser, a former acting director of the U.S. Centers for Disease Control and Prevention who is now president of the Robert Wood Johnson Foundation. “And that could be very important to make sure resources are equitable.”

Factors that contribute to the difficulties in getting tested for COVID-19 are the same that could be contributing to the high rate of hospitalizations.

Latinos and Hispanics are the largest ethnic or racial group in the country to be uninsured, according to the U.S. Census Bureau in 2017 and some struggle with language or cultural barriers, according to the U.S. Department of Health and Human Services Office of Minority Health. Those living in the country illegally also worry that testing positive could get them deported.

“I do believe that people were not getting tests early on or because of a lack of health insurance,” said Melina Valsecia, Mobile Intercultural Resource Alliance community connector for the Eagle Valley Community Foundation.

Advocates say people of color also struggle to get tested because of costs and transportation.

“There’s too many steps in order just to be tested,” said Crystal Mariscal, a consultant for Mesa County Public Health and a New Castle town council member.

“For most of the Hispanic community, this is their only option for being tested,” she said.

Aracely Cordova, a 50-year-old Aurora resident who works for a company that offers deep cleaning services — much of which is now focused on coronavirus sanitation — hopes more free or low-cost testing becomes available. She doesn’t have health insurance.

Cordova has been exposed to someone at her job whose family member was infected and she’s often tasked with cleaning areas where an infected person worked.

She worries that she or her husband, who’s a truck driver, could get the virus and pass it to the whole family.

She’s been trying to stay home as much as possible, but her family depends on the money.

“There really is no plan, no plan,” she said. “If something were to happen and I get really sick, I’ll have to go to the emergency room.”

Sergio Rodriguez waves from his hospital room before being released while recovering from COVID-19 Saturday, April 18, 2020, at UCHealth Medical Center of the Rockies.

Sergio Rodriguez’s son, Rafael Hernandez, who has been vocal about work conditions at JBS during the pandemic, had temporarily relocated from his Denver home to the hospital parking lot in Loveland. He slept in his car and pledged not to leave until his dad was released.

“I stay here because I don’t want to leave him and I’m just scared, not knowing if you’re ever going to hear his voice again or see him look at you or be able to hug or kiss him again,” Hernandez said.

By the time Rodriguez got to the Loveland hospital, he needed help breathing and could barely walk. Medical staff didn’t know what to expect with his prognosis, as they often don’t with coronavirus patients.

“It’s really like a shot in the dark,” said UCHealth nurse Hannah Rossman, who worked with Rodriguez.

Research points to health inequities and untreated health conditions that could make people of color more vulnerable to complications from COVID-19. For Latino and Hispanic residents in Colorado, rates of diabetes, obesity and chronic liver disease were higher than in the general population in 2015, according to the Colorado Office on Equity.

People of color also make up a large share of low-wage jobs, placing them at a higher risk for contracting COVID-19. The median household income for Hispanics and Latinos was $18,217 less than the median for all Coloradans with nearly twice as many living under poverty in 2015, data from the Colorado Office on Equity shows.

They often work these jobs without benefits, Gonzales Garcia said. And those that live in cities typically dwell in more densely populated — and polluted — areas, she added.

“All these things are literally putting people of color in the most disadvantaged situations,” she said. “If you don’t have access to any of those things, how are you going to be safe and healthy?”

The state health department  shut down the JBS plant until April 24.  At least 43 tested positive for the virus before the company shut down testing. Crystal Rodriguez was among employees who said it was a struggle to get the company to pay sick leave.

Sergio Rodriguez is released from the hospital after recovering from COVID-19 Saturday, April 18, 2020, at UCHealth Medical Center of the Rockies.

Amid all the bad news though, the Rodriguez family got some reprieve.

On April 18, about 30 people gathered at Medical Center of the Rockies, balloons in hand, as they held up signs of gratitude.

As the patient was wheeled out of the hospital, the well-wishers — most donning masks — clapped and cheered loudly. Crystal Rodriguez looked forward to her “second chance” with her dad.

Sergio’s eyes lit up. He was clearly smiling, despite the mask that covered his own mouth.

“I love you so much,” he said to his family. He thanked Jesus and the “angels” — his nurses. The hospital staff celebrated along with them.

“I thought this day would never come,” his wife, Yolanda Rodriguez said, before the two drove off.

Sergio Rodriguez waves while being released from the hospital after recovering from COVID-19 Saturday, April 18, 2020, at UCHealth Medical Center of the Rockies.