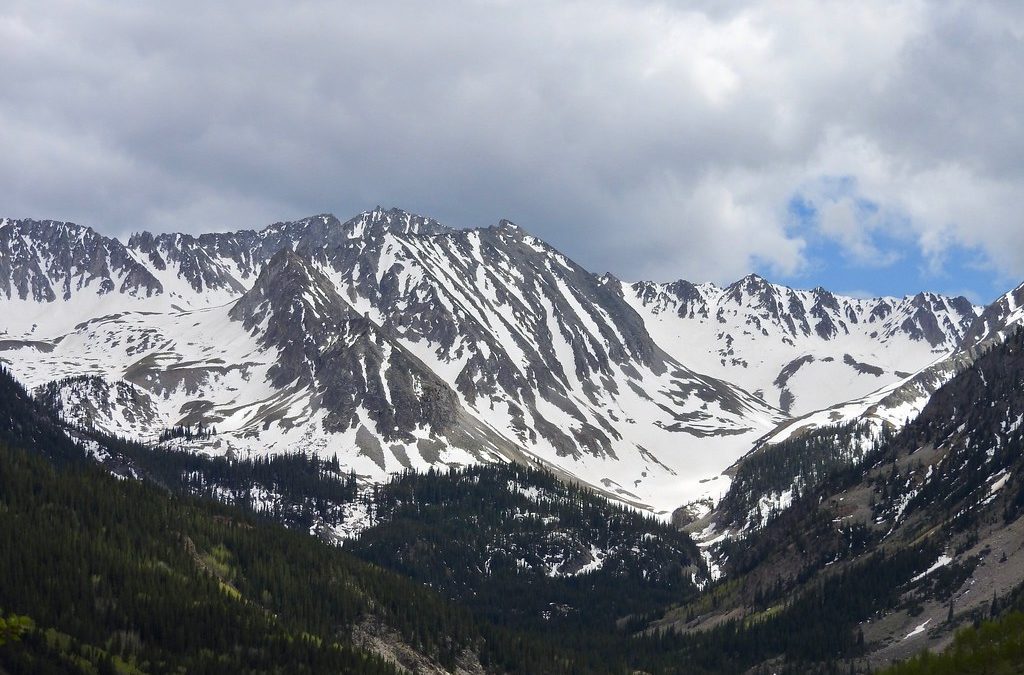 Take a look at Colorado. Go ahead, stare at it for awhile. How would you describe its shape?

I’ve already given you the answer and it’s not a trick question so there’s no way you can earn anything less than an A+ on this test. Nonetheless, your eyes, intuition and education may be deceiving you. Webster’s defines a rectangle as: “a parallelogram all of whose angles are right angles; especially one with adjacent sides of unequal length.” It certainly looks like a rectangle; four 90-degree angles with adjacent sides of unequal length. So what’s going on here?

The boundaries of the Territory and later the State of Colorado were defined by statute along precisely straight lines of latitude and longitude. Latitude doesn’t cause an issue. Those lines run east-west in parallel circles around the globe, never to meet. Longitude is a different story. Those run north-south and converge at the poles. Lines of longitude are furthest apart at the equator and come together at a common point when reaching the poles. Think old school for a moment and take a look at a globe (remember those?). The northern boundary of Colorado is several miles shorter than the southern boundary even though it’s difficult to see with the naked eye.

So perhaps the right shape to describe Colorado is a trapezoid, or maybe a geoellipsoidal rectangle? Those would be good guesses, but once again that would be wrong. You don’t really think I’d expend so much effort to talk about something so pedestrian would you? Please. No, the actual answer leads down a much stranger path.

The government set the boundaries with the best of intentions but, as has been demonstrated numerous times on Twelve Mile Circle, intent often conflicts with practical considerations. Once again, nineteenth century surveying techniques fell short of expectations when applied over hundreds of miles of rough terrain. Take a close look at the Colorado / Utah border and notice the small kink that resulted from a surveying error.

North-South? The Larger of Two Surveying Errors along the Utah-Colorado Border

There’s a story floating around the Web that claims two separate surveying parties started at opposite ends of the line and worked towards each other. As the legend goes, the two discovered they were not going to converge as they drew closer to each other. Neither party would take the blame or resurvey their length of line so they simply connected the two and called it a day. It’s a fun story but it appears to by apocryphal.

Rather, I think I’ll defer to the explanation of the Utah Geological Survey, a government agency specializing in such matters. Check out their website. They have a great map and a precise explanation that seems to debunk the collective wisdom found elsewhere on the Intertubes.

If I can summarize for a moment, they maintain that a single 1879 survey of the Utah-Colorado boundary began at the Four Corners and marched straight up to Wyoming along the designated line of longitude. The survey party placed a marker at each mile along the way. They didn’t arrive where they expected on the Wyoming border and realized they’d made a mistake. A westward jog had to exist somewhere within the line but they knew not where.

Follow-up surveys revealed minor errors in 1885 and 1893. It didn’t matter. By then the boundary had already been fixed along the previous mile markers. Changing it would have required an agreement between both States and approval by Congress. Good luck with that!

The biggest error can be located between San Juan County (the county with the most neighboring counties in the United States. Woo-hoo!), near La Sal, Utah, and Montrose County near Paradox, Colorado. Here the survey team angled westward by more than a mile across an eight mile stretch.

What were those guys drinking that day? I’m also totally enjoying the thought that the anomaly occurs near a town and valley named Paradox. There’s a similar kink in the border between Colorado and New Mexico right about here too, although I couldn’t find much information about how it got there. I’d guess probably due to a similar situation.

I remember being back in Junior High School when I took Geometry and I thought I’d never need it again so I promptly forgot most of it. Well, I was wrong. I need it right now. What kind of shape describes Colorado? Is it a trapezoid with a couple of kinks? Wikipedia seems to say it might be a simple concave polygon since it has an interior angle of greater than 180 degrees and because none of the sides intersect (otherwise we could have had the elusive boundary cross which would have been totally exciting).

Perhaps you can find a more precise way to describe Colorado’s shape. However even without that, I think we’ve safely answer the quiz of the day: It is not a rectangle.