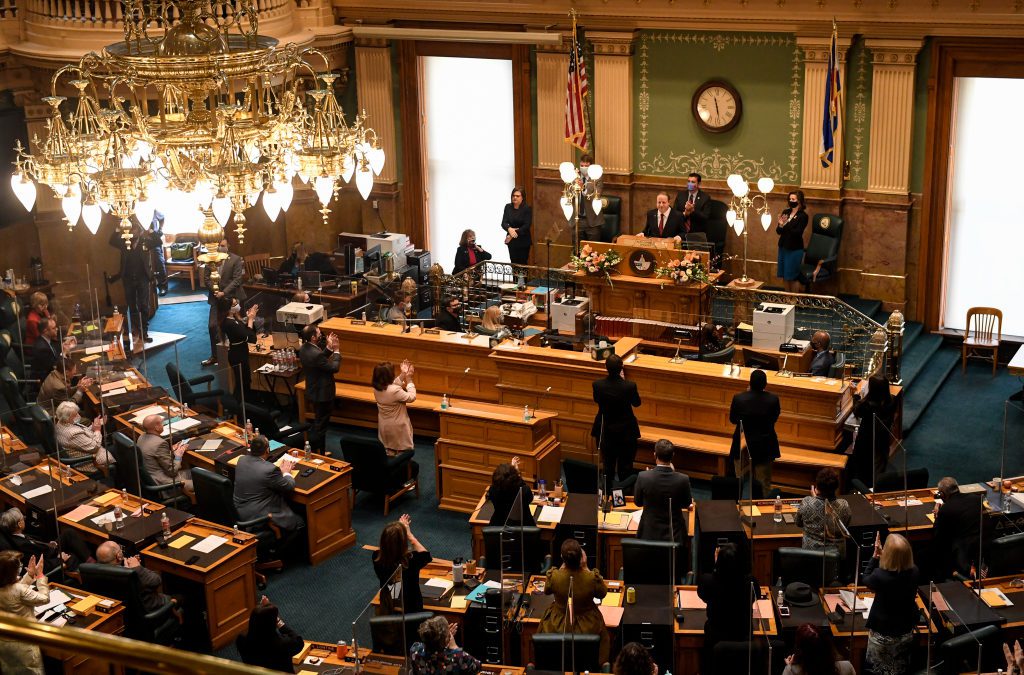 Homeowners’ associations have a lot of power when it comes to what property owners can do, including restricting the kinds of flags and signs they can hang outside their homes at certain times.

It’s an issue that has come to a head over the past year in Colorado and across the country, and one Colorado lawmakers are wading into this year. HB21-1310 would mandate HOAs could issue “content-neutral” regulations when it comes size, number and location of signs or flags, but couldn’t restrict the content of the signs or flags — even political ones outside of election season.

The bill is expected to pass the Colorado House on Thursday before heading to the Senate.

“I just feel strongly if you have a principle, there’s no buts and ands and ifs,” said sponsor Rep. Lisa Cutter, a Jefferson County Democrat. “And free speech is an important and enshrined right for Americans.”

Unlike in metro districts, special districts or other government agencies, home owners don’t have much recourse when it comes to advocating for their individual First Amendment rights except by appealing to their HOA board. In 2018, more than 60% of Coloradans lived under HOA governance, according to the Colorado HOA Forum.

The American Civil Liberties Union considers these homeowners’ associations “quasi-governmental” entities, while others say they are considered private entities. The ACLU of Colorado has received more than five dozen complaints in the last year about restrictions to what property owners can display outside their homes.

The organization sued a Denver-area subdivision in a metro district in February over its flag and sign regulations and the town of Fraser over its sign code that it considered a constitutional violation. But the ACLU of Colorado Legal Director Mark Silverstein said the group has not sued on behalf of a client living in an HOA.

Last year, after an outcry from residents, a Lowry HOA reversed course about whether residents could display their social justice signs outside their homes.

There is no organized HOA opposition to the bill. At this week’s first committee hearing, supporters of the bill talked about restrictions related to their LGBTQ, Black Lives Matter, Thin Blue Line and former President Donald Trump signs or flags.

Charlie Bruce received violation notices for flying a Black Lives Matter flag outside of a rental home, Bruce told the committee. Other neighbors had also put up flags, but Bruce had no recourse for change except through the landlord.

“Without the passage of (HB21-)1310, people who live in HOA communities could lose those rights to a three-person board or a management company liaison with a different ideological position,” Bruce said. “Regulating speech on the basis of its content should not be permitted by any HOA and 1310 would protect this most Colorado value.”

Although the bill is sponsored by Democrats, it passed its first committee unanimously — with little Republican opposition, aside from concerns about unintentional consequences. Rep. Janice Rich, a Grand Junction Republican, who supported the bill, said she was worried there may be ideological disagreements between neighbors, or people may hang flags that others may find offensive.

Despite her colleagues’ support in committee, Penrose GOP Rep. Stephanie Luck opposed the bill on the House floor Wednesday, saying it would infringe on private contracts that people willingly enter.

“The government has no right to engage in efforts between private contractual parties,” Luck said.