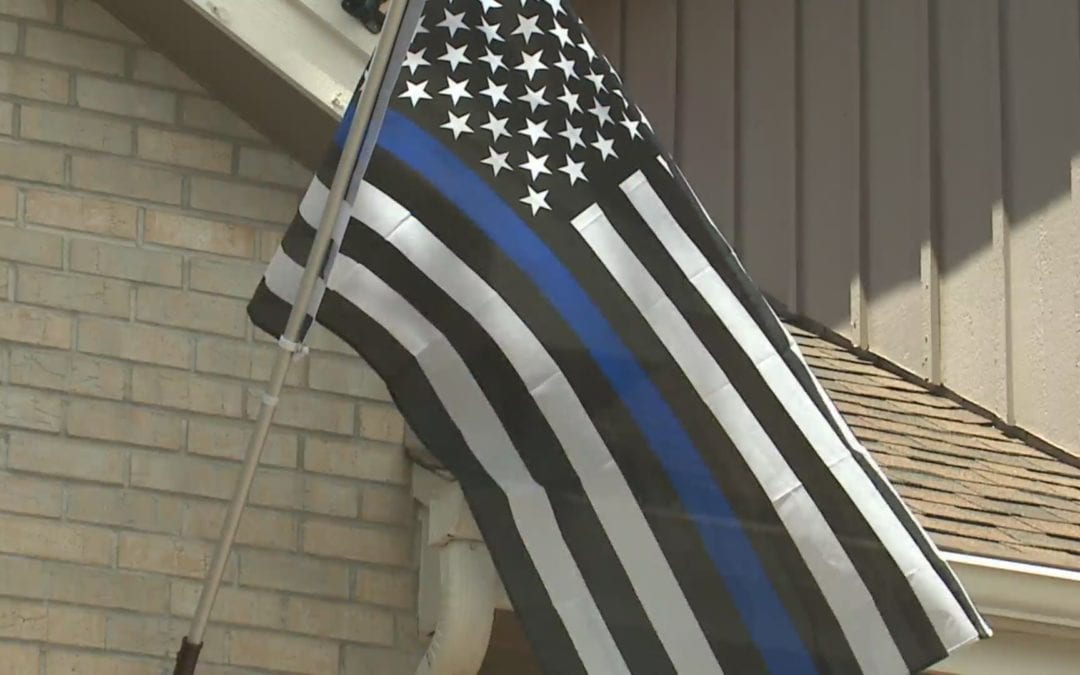 A police chaplain in Colorado says he is being “targeted” by his homeowner’s association for displaying a ‘thin blue line’ flag outside his home.

The chaplain, interviewed by Fox 31 Denver, preferred not to reveal his name or other identifying details for the safety of his family.

He received a notice from his homeowners association, saying “it was observed there is a ‘white lives matter flag’” hanging at his home, but he argued that the thin blue line flag stands for the sacrifice law enforcement officers make and has nothing to do with race.

“There’s nothing about racism at all there,” he told the outlet. “It’s simply saying, ‘We stand for you. You continue to do all the great things you do.’ I serve with so many different officers of so many different ethnic backgrounds. I’ve shared it with them. This isn’t a white lives, this is a blue lives matter, because they do.”

The letter went on to quote HOA guidelines, saying that “no unsightly article shall be permitted” and to “please remove the items and store them out sight.”

A legal expert cited by Fox 31 explained that, because homeowners associations are private, the chaplain’s flag would not be protected under the First Amendment. However, there is a Colorado law that protects homeowners’ rights to display flags and political signs from HOA restrictions.

“My officers and most officers are wonderful people. I just want the police officers to know they’re doing exactly what they are supposed to be doing: protecting and serving. I’ve seen them work 16-18 hour days and turn around and do it again, even when they’ve been yelling at them, telling them they hate them and they want them to die. I’ve seen officers give up their own family’s money for Christmas for underprivileged kids in the worst neighborhoods. I work with so many officers that are so amazing,” he said.

The chaplain said that the HOA’s demand comes right when he says the officers he works with need support the most. The past three weeks, in particular, he says, have been very difficult for his officers. He simply wants to show his appreciation for them, which he has been doing since National Police week in May when he first put up the flag.

“I believe that’s why I’m being targeted—because I’m associated with them. I believe it’s just because it’s everything going on in the world right now, in this country,” he said.

The chaplain declared that he has no intention of taking the flag down.

“I can’t take the flag down. I’d be a hypocrite. If I can stand before multitudes of officers, they are doing a good deed for what they are doing and then I take that flag down and say, ‘Well, I’m going to have to take it down, no it’s got to stay up,” the chaplain said.

The chaplain says he was also told to take down his blue porch light and an angel over his garage. He added that neighbors have not been told to remove similar flags supporting fire and military.

“I think there’s a mixed message, the wrong message that police officers are evil people,” he went on. “It’s just farthest from the truth. They’re not evil at all. I see them day in and day out, every night, continuing to be patient, continuing to be loving, continuing to try to help people. You know, I have a chaplain badge and I’ve told them I’m proud to wear that badge. Not because it’s a police badge or because it’s this department or that, it’s because of the things I’ve seen them do.”

If you appreciate the work we are doing to fight the leftist assault on our values, to help us continue. Thank you so much!