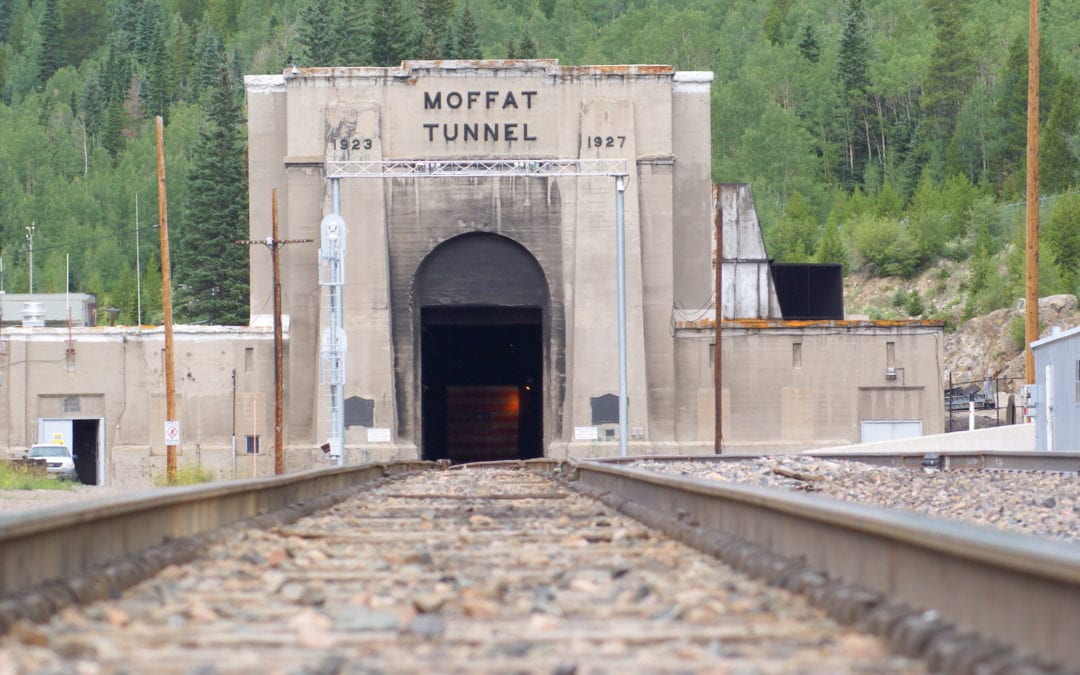 Tunnels are an incredible feat of human engineering. By boring out tons and tons of earth, we can make pathways through mountains and beneath water, making travel easier for everyone. Among the many well-built and intricate tunnels that cut through the undersides of America’s mountains, Colorado houses quite a few of these marvels.

From the high heights of Leadville’s old railroad tunnels to the canyon-spanning Hanging Lake Tunnel, you can find amazing tunnels around the Rockies. They benefit everyone from highway drivers to railway conductors. For those interested in the transportation history of the state, we’ve curated a list of historic train and highway tunnels to learn more about. Some are still in use, while others have long since closed up operation.

Here are some past and present highway and railroad tunnels in Colorado, in no particular order:

The Moffat Tunnel is one of the most famous train tunnels in Colorado, even if it may not be well-known to the average person. It was conceived of by railroad tycoon David Moffat in 1902 as an alternative route to the railroad line that preceded it. The old one followed a steep grade and imposed harsh weather conditions, which made it difficult for the railroad to profit.

Moffat’s dream was to build a railroad line from Denver to Salt Lake City that crossed the Continental Divide underground in order to avoid the steep grades and snow accumulation. Though he did not live to see its construction, Moffat Tunnel was built in the mid 1920s and officially opened for business in 1928. The entrances to Moffat Tunnel are still a sight to see – a gorgeous stone archway with ornamental bronze lettering listing the tunnel’s name.

The East Portal resides in Rollinsville, about an hour and a half west of Denver. There is free dispersed camping by Moffat Tunnel, as well as 4×4 trails and great hiking. The West Portal is in Winter Park.

Today, Moffat Tunnel remains in use and is still mainly a freight line, shipping coal and other resources all over the country underneath the bulk of the Rocky Mountains. If you’re looking to catch a glimpse of it, however, just catch a ride on Amtrak’s California Zephyr west from Denver. The tunnel’s apex is the highest point on Amtrak’s line, and while the elevation may not offer incredible views, it’s something wonderful to witness this gorgeous piece of railroad history.

(Highway I-70 – near Georgetown to Silverthorne)

Most visitors and locals to the state have passed through the Eisenhower-Johnson Memorial Tunnel, located about an hour west of Denver on I-70. These 1.7 mile long tunnels were bored out beneath the Continental Divide to make a shorter and more direct path to the western slope. It was designed to help alleviate traffic and weather hazards that plagued the neighboring Loveland Pass route.

The Eisenhower-Johnson Memorial Tunnels were named after Dwight D. Eisenhower, US President and the creator of the interstate highway system, and Edwin C. Johnson, a Colorado senator and legislator. The Eisenhower Tunnel is a feat of engineering and currently holds the title for the highest vehicular tunnel in the United States.

Although the construction took a bit longer than planned due to environmental issues, the westbound Eisenhower and eastbound Johnson tunnels were completed in 1973 and 1979, respectively. They have since made travel much easier for those looking to enjoy some winter skiing and boarding. For those who want to experience a bit of recent tunnel history, the Eisenhower-Johnson Memorial Tunnel is an easy one to drive to.

Another feat of engineering along the I-70 corridor is the Veteran’s Memorial Tunnel, also known as the I-70 Twin Tunnels. At 700 feet long and servicing 42,000 visitors each day, this tunnel was built to improve gridlock conditions and break up congestion of traffic headed to the ski resorts and has since been expanded to provide even more space for drivers.

They were originally built in the 1960s to serve as a route to Idaho Springs that did not go over mountain passes, but they have recently been expanded and added a new lane to improve traffic congestion. In 2014, the official name change was commemorated by a ceremony, along with newly-opened toll lanes to allow easier access to ski resorts.

Gold Camp Road is well-known to most Colorado Springs residents. An old railroad line, it was converted into a toll road in the 1920s and eventually became a public road. It offered incredible views of the city below as well as transportation to the nearby town of Victor.

Due to tunnel collapses, however, it’s not possible to drive the entire length of Gold Camp anymore, although you still can access the first two tunnels by car. Its trails and tunnels are now mostly populated with hikers and bikers looking to enjoy some outdoor recreation. There are a total of nine tunnels along Gold Camp, and although quite a few of them have collapsed, this is the evidence left of this historic road.

Urban legend surrounds the Gold Camp Road Tunnels. As the story goes, the spirits of a crushed school bus from tunnel #3 still roam the mountainside. It is said that if you pull into one of the tunnels on a drive up the road and turn off your lights on a dark and spooky night, you may feel the hands of the trapped children pushing you up the road. Though there’s no evidence that this urban legend is indeed true, it’s still a fun place to stop if you have an interest in railroad history or any lingering spirits.

Depending upon which tunnels you’re hoping to see, there are two ways to get to Gold Camp Road. To access tunnels #1-3, drive up to Cheyenne Canon and follow the road until it becomes a dirt road. For the rest of the tunnels, take Old Stage Road west past Cheyenne Mountain until that, too, turns into a dirt road. Be careful driving on these roads after a recent snow–they are known to be quite treacherous.

The national natural landmark, Hanging Lake, is an incredible spot to stop on your next trip west on Interstate 70. On top of this, getting there means passing through a tunnel that symbolized the completion of the interstate highway system. The tunnel is located roughly 9 miles east of Glenwood Springs.

Hanging Lake Tunnel is another marvel of modern tunnel-building and has decreased travel times considerably along this part of I-70. Not only that, but Hanging Lake Tunnel and the surrounding interstate were built with nature in mind. The construction worked as much with the land and natural surroundings as possible.

Glenwood Canyon had long been known as a treacherous and terrifying place to drive. So when the I-70 corridor was constructed, it took some feats of engineering to complete this highway system in a manner that would be safe to motorists. Of these, the Hanging Lake Traffic Control Center is one of the most high-tech in the nation. Their computerized system tracks every car that enters and exits the tunnel, ensuring that if emergency personnel are needed, they will be sent immediately.

Hagerman Tunnel near Leadville was one of the first railroad tunnels that crossed the Continental Divide. It was built by the Colorado Midland Railroad and began operation in 1887 transporting mining materials and ore. At an elevation of 11,528 ft, keeping the tracks clear of snow and debris was a difficult task, which led to other routes being formulated that would be easier to navigate. In 1921, the Busk-Ivanhoe Tunnel replaced the Hagerman Tunnel completely, causing this tunnel to be abandoned.

Today, you can still visit Hagerman Tunnel while hiking on the Colorado Midland Trail. A partial rockslide has blocked the entrance and the floor is typically coated in ice, so it’s not suggested to enter it unless you are willing to take the risk. Although this tunnel has been out of operation for almost 100 years, you can still almost feel the history around you.

Unfortunately, this tunnel didn’t last long. Due to financial issues from the Midland Railroad, the Busk-Ivanhoe Tunnel was renamed the Carlton Tunnel, a highway toll road that joined Highway 104, in 1922. However, the tunnel was only wide enough for one vehicle at a time, which made it difficult to travel on. In 1943, a rockfall destroyed the tunnel and it was never repaired.

Today, the Busk-Ivanhoe Tunnel is part of a water diversion project, but you can still visit the Colorado Midland Trail and get a glimpse of this piece of Colorado transportation history. It’s located west of Leadville.

Before automobiles were invented, many of Colorado’s denizens used underground tunnels to get around their towns, usually accessed from the basements of businesses. Below modern-day sidewalks in many cities lie these tunnels, many of which have been filled in or lost to time.

If you’re interested in finding out more about these incredible underground tunnels, check out Tracy Beach’s book, The Tunnels Under Our Feet (affiliate link), which chronicles her discovery of these forgotten undergrounds beneath the streets of Denver, Colorado Springs, Fort Collins, and other modern-day Colorado towns.

Another lost railroad tunnel, the Alpine Tunnel once held the honor of being the highest tunnel in the world at 11,523 feet. It was the very first tunnel to cross the Continental Divide, a feat that led to the creation of many other famous railroad routes. The 1,772 foot narrow gauge railroad tunnel was built between 1880 and 1882, east of Pitkin, Colorado. It closed service in 1910. Today the tunnel is sealed shut. The trackbed before the tunnel is used as a popular trail for hiking, biking and OHVs.

The transportation history of Colorado is fascinating, its rapid growth fueled by the mining days. On your next trip to this great state consider a visit to one of these incredible tunnels. Whether you’re riding the rails in the Moffat Tunnel aboard the California Zephyr or driving yourself through the Eisenhower Tunnel, it’s incredible to see the variety of ways humans cut through rock.

For a tunnel-like experience, the state is full of mine tours, which provide a chance to go deep underground, some 1000 feet below the surface. From Cripple Creek to Idaho Springs, there are a myriad of mines to explore year round. Or take a trip aboard on a historic train, for a trip of a lifetime. The above pictured, Lebanon Tunnel, is an optional mine tour you can take while riding the Georgetown Loop Railroad.

While on the topic of Colorado’s past, give some of the churches and cathedrals around Denver a visit. Some are more than 100 years old. If you’ll be heading down to the Pikes Peak region, delve into the captivating history of Colorado Springs, another colorful city on the Front Range.