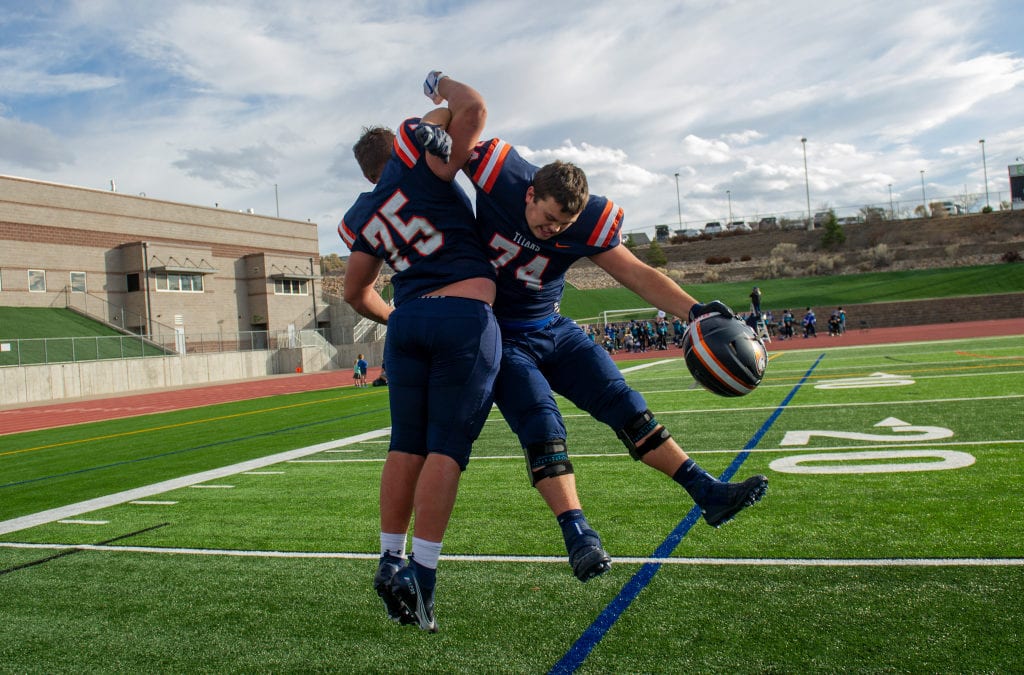 Biggest snub: Columbine — The Rebels’ fate was likely sealed the day they had to cancel their rivalry showdown with Ralston Valley. With one less game on the schedule — which also happened to be one of Columbine’s toughest — last year’s 5A runners-up didn’t have the RPI strength to climb into the top 8. Honorable mention: Castle View’s two losses came to unbeaten Valor and Fairview, the latter of which CV actually led in the fourth quarter.

Favorite: Cherry Creek — Shockingly, the Bruins were not a unanimous No. 1 in the final CHSAANow coaches poll. One first-place vote went to Valor Christian. As good as the Eagles have been, however, there’s no doubt the Bruins are prohibitive favorites. Not only do they have a roster overflowing with FBS-level talent, they just rampaged through the deepest league in the state. Consider this: The Bruins defense has scored as many touchdowns as it has given up (2) in its last five Centennial League games. Throw in a deadly passing game piloted by CU hoops commit Julian Hammond III (1,802 yards, 17 TDs, 3 INTs), an explosive rushing attack led by James Walker II (709 yards, 8 TDs) and a special teams that has four touchdowns to its name, and the Bruins have zero holes.

Challenger: Valor Christian — There’s only one Gavin Sawchuk in the state of Colorado, and he plays for the Eagles. That alone makes Valor a serious threat to win their fourth 5A title in six years. The five-star Class of 2022 running back is averaging a gaudy 10.7 yards per carry through five games with 1,149 all-purpose yards and 17 TDs. On the other side of the ball, the Valor defense has allowed just 28 points this season — 21 of which came in one game against Castle View.

Dark horse: Legend — The Titans appear to have all the ingredients of a legit contender. Balanced offense? Kalen Shoemaker has 890 yards and 14 TDs passing, while Connor Eise (798 yards, 8 TDs) powers a strong run game. Salty defense? Legend posted three shutouts and a near blanking of Regis Jesuit in a 31-7 drubbing. Signature wins? Aside from dominating Regis, the Titans also outlasted defending 4A champion Pine Creek 21-20. A matchup with perenial power Fairview, which once again features an explosive passing attack, will tell the tale this weekend.

Biggest snub: Skyline — Pity the poor Falcons, whose lone loss this season came by one point to fourth-seeded Loveland. Two years removed from a surprise run to the 4A title game, Skyline would’ve been a tough out with its explosive offense led by Chase Silva and Grayden Bridwell. Honorable mention: Similar to Skyline, Brighton had just one blemish on its record — a 30-21 loss to No. 5 Broomfield that was a white-knuckler.

Favorite: Dakota Ridge — Nobody came close to challenging Dakota Ridge in six regular-season games, with the Eagles outscoring opponents 308-32. In fact, over the last four, the Eagles surrendered just two field goals while scoring 42-plus points in each. CU commit Charlie Offerdahl is averaging 11.6 yards per carry with 13 total TDs as well as five interceptions on defense. Quarterback Ben Gultig has 920 yards and 14 TDs passing. And both of those guys have spent some time watching from the sidelines of blowout wins. Could the Eagles be a product of a down league? We’ll find out Saturday in Englewood.

Challenger: Palmer Ridge — When in doubt, go with the team that features a future CSU quarterback (Luke McAllister) and multiple college recruits at wide receiver (Kaden Dudley, Anthony Costanzo and Marcellus Reed). The Bears no doubt have the passing attack to go the distance in their jump to the 4A ranks. But will they be sharp after missing back-to-back games to COVID? A quarterfinal matchup with Pine Creek — which beat Palmer Ridge each of the past two years — offers a shot at revenge.

Dark horse: Fountain-Fort Carson — CHSAA’s RPI loved the Trojans, ranking the former 5A squad at No. 1. The state’s coaches, which put FFC at No. 6, weren’t quite as impressed with a resume that includes a split of a season series with Rampart and a win over Pueblo West. One thing is for certain: Senior running back Q Jones (137 carries, 1,395 yards, TDs) is a force to be reckoned with. A stingy Ponderosa defense awaits in the quarterfinals.

Biggest snub: Palisade — The 3A bracket ended up being relatively straightforward, but the Bulldogs (4-2) could certainly have some beef given that they knocked off seventh-seeded Evergreen 24-7 in Week 1. Conifer, which beat Palisade but lost to Evergreen in Week 6, could also have an argument.

Favorite: Holy Family — For the first time since 2016, the 3A title will go to someone other than Palmer Ridge. While Roosevelt may make sense to peg as the favorite since the Roughriders are the No. 1 seed, we’ll go with the one team in the bracket that has a double-digit victory over a state playoff team, Holy Family, which pushed around sixth-seeded Lutheran in a 38-14 win. The Tigers have size up front, a quarterback who can sling it (Michael White, 903 yards, 12 TDs) and a running back who can detonate in an instant (Trevin Johnson, 786 yards, 11 TDs, 9.7 ypc).

Challenger: Roosevelt — It’s been five years since the Roughriders last reached the 3A final, and this may be their best chance to get back there. An overtime win over Mead — decided by a missed extra point — is the Roughriders’ most impressive victory. Since then, they’ve outscored their last three opponents 139-0. Six-foot-2, 190-pound quarterback Brig Hartson is a threat running (204 yards, 2 TDs) and throwing (838 yards, 13 TDs, 2 INTs), while the defense has a pair of playmakers in Clayton Robinson (13.0 TFLs, 5.5 sacks, 1 INT) and Cooper Walton (11.0 TFLs, 1 INT) and allowed just four touchdowns as a unit.

Dark horse: Pueblo South — A Pueblo team has played in the 3A championship game five of the last six seasons, and there’s reason to believe Pueblo South could do so again for the second straight year. The Colts got off to a slow start after missing the first two weeks of the season to COVID, but they’ve already advanced to the semifinals after coronavirus knocked out Mead after the bracket was revealed. All-state running back George Longoria has 816 yards and four touchdowns rushing in just four games. Honorable mention: Durango, led by dual-threat QB Jordan Woolverton and a stifling defense, will be tough to beat.

Note: All games at home site of higher seed unless otherwise noted.