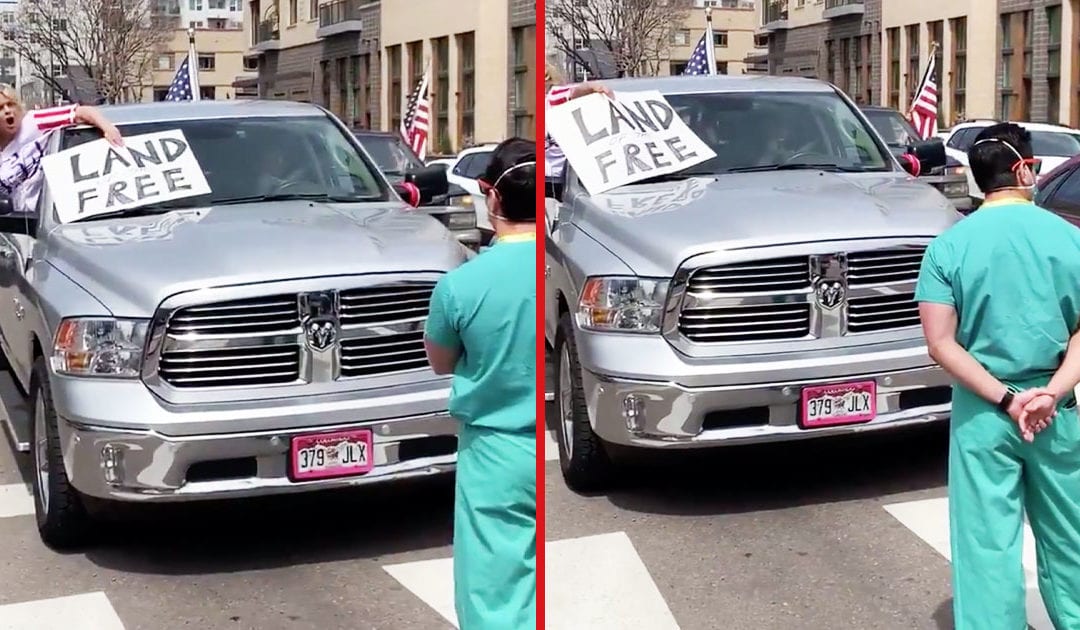 Around the U.S., people are protesting coronavirus lockdown orders. But in Colorado, healthcare workers protested right back

The coronavirus pandemic is still very much ongoing — over the weekend, the U.S. death toll topped 40,000, surpassing in just a handful of weeks the number of people killed by the entire 2018-2019 flu season. Many cities and states are still under lockdown orders, where people are encouraged to shelter at home unless they need to go out for services that are essential to life, and leading scientists and epidemiologists say social distancing is the best chance we have at slowing the spread of the virus enough for our healthcare systems to not become overwhelmed.

Still, people all over the U.S. held quarantine protests over the weekend.

In Denver, people gathered on the steps of the state capitol and lined up in cars and trucks with signs. At one intersection, though, they discovered a counter-protest: Two healthcare workers from a Denver-area hospital, who have worked on the front lines of fighting this disease and have seen firsthand the human toll it can take. They stood silently in an intersection, sometimes blocking the parade of cars that was passing by, and sometimes just being there as a reminder to the drivers that real human lives are at stake here.

The images captured by bystanders and journalists are powerful.

Remarkable scene at 12th and Grant, where two healthcare workers from a Denver-area hospital — they declined to say which or give their names — are standing in the crosswalk during red lights as a “reminder,” they say, of why shutdown measures are in place. pic.twitter.com/7xTjXvGN2E

They say they’ve been treating COVID patients for weeks. Today most of the people driving by have been “very aggressive,” they say. I’ve been standing here for a few minutes and already seen two people get in their faces pic.twitter.com/56P8kwiAZX

The two workers, who declined to give their names to local journalists, said protestors treated them with aggression as they passed. Still, they stood in that intersection to make these people confront the fact that they’re demanding the country reopen and guaranteeing more people will die because of it.

An incredible series of photos by Alyson McClaran in Denver. She writes “health care workers stand in the street in counter-protest to hundreds of people who… demand he stay-at-home order be lifted”. pic.twitter.com/UjlpFjug4v

This image. I can’t believe these Denver healthcare workers had to do this. Like they aren’t already risking their lives. pic.twitter.com/LBYl78yxa0

These healthcare workers have risked their lives every day at their jobs. Now they’re risking their safety once again to stand up to lockdown protestors. They truly deserve better than this.

Nobody is enjoying being under lockdown orders. But people who are capable of empathy and logical thinking can also understand that staying home is the best thing we can all do to help save lives. These protestors are only going to help further spread the virus, and because of that, more people will die. But that’s not something they seem to care about as much as their ability to buy guns and, I don’t know, go to the movies? Where is it they even want to go so badly?

There are real heroes in these photos, and they are not the lockdown protestors. They are the healthcare workers who are already doing so much to help save human lives, and now have to deal with this on top of it all. We don’t deserve heroes like them.