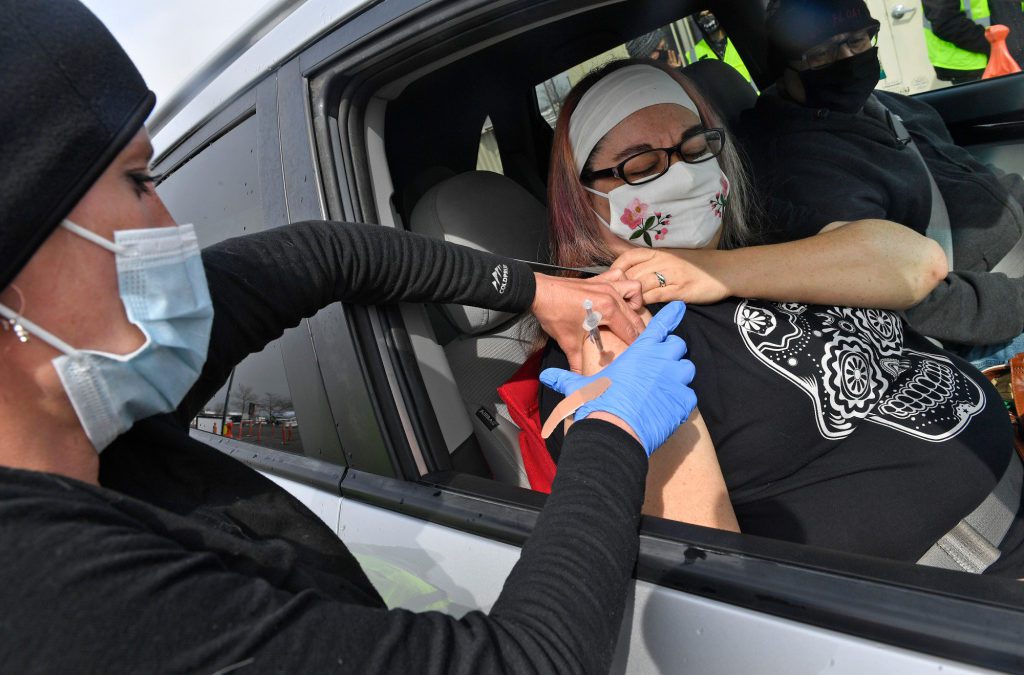 With almost all Coloradans now eligible for COVID-19 vaccines, a new question lingers about the state’s return to normal: Will residents be required to show proof of immunization to once again attend concerts, restaurants and sporting events?

As of now, there is no statewide program and White House Press Secretary Jen Psaki said Friday that any potential vaccine passports will be “driven by the private sector.” But local public health experts said it’s likely we’ll see such initiatives in the coming months — and Colorado’s health department is looking into vaccine passports.

“While we are exploring what’s working in other states, anything we do will be specific to Colorado and our needs,” a spokesperson for the state Department of Public Health and Environment said in an email. “A business could not access a customer’s protected health information, such as their COVID-19 immunization status, unless that person volunteered that information.”

The idea behind a passport program, such as the one just launched in New York, is that people could use an app or other digital method to confirm they are vaccinated to resume activities — particularly for travel or attending large entertainment and sporting events — that have been restricted during the pandemic.

The efforts to develop a way for people to show they have received the vaccine come as the state has both begun rolling back COVID-19 restrictions and expanded access to the vaccines to anyone 16 and older. Variants of the coronavirus still remain a threat as cases begin to trend upward and hospitalizations largely have plateaued, but state and federal officials have said they believe things will begin returning to normal by summer.

Plans already are underway for Coloradans to attend entertainment and sporting events that previously were restricted because of the pandemic. After being closed for most of the past year, Red Rocks Amphitheatre will reopen later this month with a 2,500-person capacity. The venue doesn’t plan to have concertgoers show proof of vaccination — yet.

“I don’t think anybody has come up with the right plan as of yet,” said Brian Kitts, spokesman for Denver Arts & Venues, which owns and runs Red Rocks. “For now, the plan is masks and social distancing.”

The Colorado Rockies, which welcomed fans back to Coors Field on Thursday for the first time since 2019, also has no plans at the moment to make attendees show proof of vaccination, spokesman Cory Little said.

Implementing any vaccine passport initiative developed by the government or businesses still faces hurdles, including regarding privacy, equity and legal concerns, according to public health experts.

One concern about vaccination passports is the fairness of only allowing people inoculated against the coronavirus to attend public events or fly with an airline when the shots still remain difficult to get. For this same reason, the programs could exacerbate inequality as access to COVID-19 vaccines remains a challenge for people of color, said Dr. Matthew Wynia, director of the Center for Bioethics and Humanities at the University of Colorado’s Anschutz Medical Campus.

Despite experiencing higher rates of infection and death from COVID-19, people of color have been inoculated against the coronavirus at a lower rate than their white peers.

So any passport initiative would have to make sure it’s not discriminatory against people who don’t have access to COVID-19 vaccines, Wynia said.

For that reason, he said it’s too soon to implement any type of vaccine mandate. Such programs should wait until vaccines are readily available to the point where anyone can walk into a pharmacy and get the shot, he said.

Vaccine proof not a new idea

Even in the United States, tracking vaccinations is not unique. Each state, including Colorado, maintains a vaccine registry that is used by public health officials. The focus of the registries is mostly on childhood vaccinations, which families are required to show proof of to schools and universities.

“These have been around for a long time,” said Glen Mays, a professor of health policy at the Colorado School of Public Health. “It’s not unique to COVID.”

The database in Colorado is called the Colorado Immunization Information System and the state health department is already using it to track COVID-19 immunizations across the state.

The information stored in the system is confidential, so while the Department of Public Health and Environment can use it to report the total number of residents vaccinated against certain diseases, it does not reveal any information that would identify specific people, according to the agency.

“Coloradans should be assured that business owners will not be able to access a customer’s protected health information, such as their COVID-19 immunization status,” a spokesperson for the health department said.

Any potential vaccine passport would go beyond the existing system because it would be used for a much wider array of activities, such as for air travel or sporting events, Mays said.

“You could imagine businesses starting to use these pretty soon,” Wynia added, calling passport initiatives a “soft mandate” on vaccines.

“If you’re going to mandate something, ethically, the mandate should be more or less proven to be the only way you can achieve your public health goal,” he said. “Vaccines tend to fall in these mandate categories.”

One of the issues the passport programs will face will be where the data they use comes from and how protected it will be against hacking. Self-reported data also raises the issue of how reliable it is, Mays said.

There are more than a dozen passport initiatives underway, according to The Washington Post, which creates an issue of coordination.

Potential passport programs have drawn criticism from those concerned about privacy and sharing personal health information. In Florida, Gov. Ron DeSantis issued an order Friday banning all businesses and government entities from requiring people to show documented proof of immunization against the coronavirus, the Orlando Sentinel reported.

The Libertarian Party of Colorado already has released a statement saying  it “condemns any attempt by the Biden administration or any government to institute a vaccine passport,” saying that it is “a grotesque violation of human rights.”

While schools require students to get certain vaccinations and hospitals require employees to get the flu shot, there is a potential legal issue with companies requiring employees to get inoculated against the coronavirus, public health experts said.

It mostly comes from the fact that the three vaccines on the market — Pfizer, Moderna and Johnson & Johnson — have received emergency use authorization by the U.S. Food and Drug Administration, but have not yet been fully approved and licensed by the agency.

“There’s legal dispute about this,” Wynia said. “And it hasn’t been litigated yet.”

Most public health law experts believe that there is more solid ground for an employer or government mandate requiring vaccines after they receive official approval by the FDA, which could happen as soon as this month, he said.

The Colorado Restaurant Association said it has not explored mandating or tracking that restaurant employees get the COVID-19 vaccine, saying in statement that “there may be legal issues with that kind of disclosure.”

“COVID-19 vaccines are the first step in getting restaurants fully open and our economy back up and running at full capacity,” said Sonia Riggs, chief executive officer of the association, in a statement. “We’re focused right now on ensuring widespread access to vaccines for the restaurant industry, and are encouraged that vaccines will be available to the general public (Friday) as well.”