Colorado health care workers on the front lines of coronavirus fight speak out: “I’m afraid about being dead” – The Denver Post 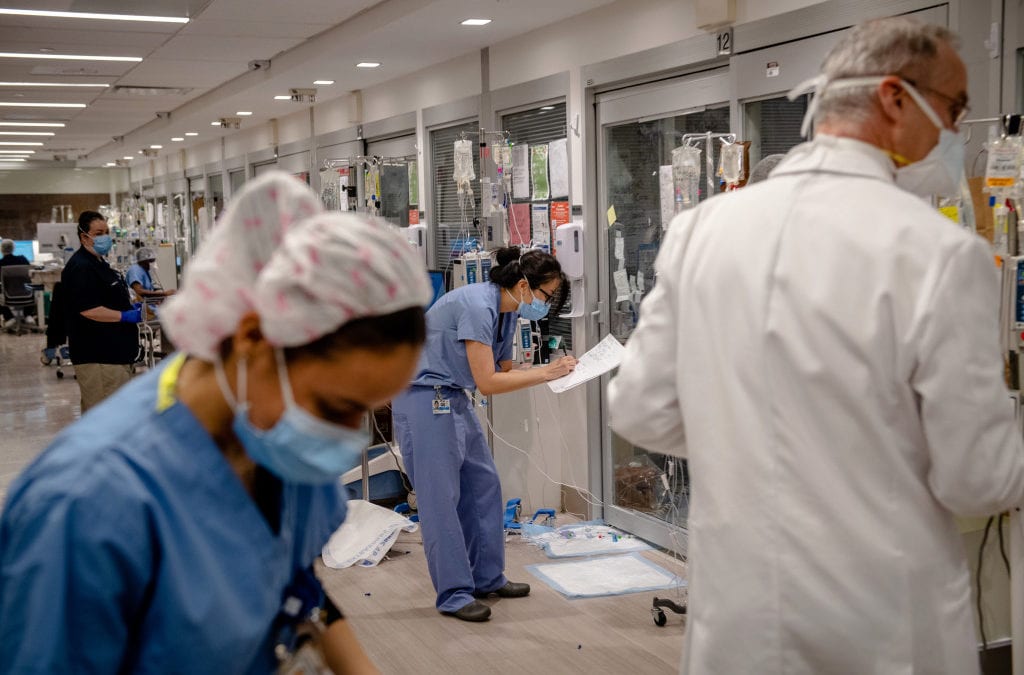 When Harshal Shah, an internal medicine doctor at Parkview Medical Center in Pueblo, gets home from work, he enters through the garage and walks straight to the basement without greeting his pregnant wife or 4-year-old son.

He hasn’t hugged either of them in a month, because he’s treating coronavirus patients and does not want to infect his family.

After 12-hour shifts at the hospital, Shah, laying on a mattress he dragged downstairs, along with a microwave and a toaster, can’t relax.

Many of those working on the front lines in Colorado emergency rooms and ICUs are, like Shah, scared of becoming a statistic. They’re also largely unprotected, due to a critical lack of personal protective equipment, or PPE, such as masks and gowns. The state government’s coronavirus website shows about a quarter of hospitals say they could run out of some PPE within the next week, which is actually an improvement over recent weeks.

At work, Shah’s been wearing the same N95 mask for a week. In normal times, he could easily run through several of them in a day. Now, he said, his bosses tell him he can replace the one he’s been wearing once it gets moist.

At home, his wife leaves him dinner, and he retrieves it and eats alone in the basement. If they need to talk, they’ll either FaceTime or shout between floors, separated by the staircase.

“It is very hard,” he said. “We’re living with a 4-year-old son, and he’s also sacred — scared about what this coronavirus is, why my dad isn’t coming in and playing with me. It’s getting very tough on us.”

A dozen front-line health care workers in Colorado all said in interviews this week that they feel a sense of duty right now, but that they do not feel adequately protected.

“You signed up for this work to help people,” said Denver emergency room nurse Kyle Mullica. “You didn’t sign up to sacrifice yourself, to die for them.”

Mullica is also a state representative, and he said he feels obligated to advocate for his colleagues.

“You don’t get into nursing to make millions of dollars and get rich. You care about people and want to help them in difficult times,” he said. “The least that can happen is that you’re able to be protected when you do that, be able to make it home to your family safely. To see where we’re at, the lack of PPE, is concerning, scary and unacceptable. I’ve seen it firsthand.”

The advocacy group MoveOn, along with other organizations, display signs that read #GetUsPPE, along images of health care workers, a call for personal protective equipment for health care workers during the coronavirus outbreak, on the West Lawn of the U.S. Capitol in Washington, D.C., on Friday, April 17, 2020.

Many health care workers who do not have Mullica’s position of power are scared to air their concerns about working conditions. Two health care professionals who said criticizing workplace conditions could get them fired spoke to The Denver Post on condition of anonymity.

One of them, a front-line nurse practitioner, said her colleagues have been feeling uneasy about the volume of visitors accompanying patients at their clinic. They see these patients in roughly 8-by-10-foot rooms, and, with no rapid testing system and limited PPE, having three of more people in a room of that size does not feel safe to many of them. When the nurse practitioner raised this to management, nothing was done. The nurse practitioner said she was told they were acting hysterical.

“The message was to toe the company line and reassure my colleagues,” she said. “But I had no way of reassuring them that they were being protected, or that things were being done that would protect them.

“We have people who have sick family workers at home, and for front-line clinicians it’s hard to hear, ‘We’re thinking about it, we’re working on it.’ Because, meanwhile, we’re seeing 20 patients and their family members every day.”

Another provider, a senior ICU physician for a large hospital system, said that before coronavirus she’d run through a dozen or more disposable plastic gowns per day, discarding them after each use.

“Now,” she said, “the thin plastic gowns are being reused. Outside of one patient room there will be a plastic gown and the provider, nurse, doc, whoever has to go in the room, they put it on, then when they come out they wipe it down with a bleach wipe, and then you have to try to snake your way out of it.”

She continued: “The feeling — and it’s a pretty overwhelming feeling, and it’s very common one right now — is to walk in the hospital and you just know it’s almost like a death sentence. I’m an ICU doctor. I’m not intrinsically afraid. But it’s fear provoking, knowing you’re not protected. There’s no possibility I’m adequately protected. So the only question is have I already gotten (the virus), and if not, if I get it, how sick will I get? That’s the feeling everybody has.”

Darlene Tad-y, the Colorado Hospital Association’s vice president for clinical affairs, did not exactly downplay the severity of the problem.

In an interview Wednesday, Tad-y, who also practices medicine at UCHealth University of Colorado Hospital in Aurora, said it speaks volumes that the state’s 81 acute-care hospitals are now operating under a “Crisis Standards of Care” agreement, which lays out protocols for both the present and the worst-case scenario. For now, providers are reusing and sharing PPE, and sanitizing some of it for even more usage.

But, Tad-y said, “The truth is that sufficient and appropriate PPE is really critical to ensuring the safety and health of health care workers and first responders.” And she did not deny that the PPE presently available is neither sufficient or appropriate.

Nor did Gov. Jared Polis, when asked about the crisis at a press conference on Wednesday. Among the many who need PPE right now, front-line health care workers “are the top priority,” he said. Polis said that the state has been working to acquire hundreds of thousands of masks, gowns and other items, and celebrated the fact that Colorado would be receiving 100,000 new masks from Taiwan.

That number sounds bigger than it is, though; it’s not even enough to sustain one full day of statewide operations, the Colorado Department of Health and Environment has said.

Asked whether the PPE situation is expected to improve here, Polis did not directly answer. He simply reiterated that he feels health care workers on the front lines need to be prioritized if and when Colorado receives new PPE.

“I worked so hard to get rid of this feeling”

Compounding profound fears about protective equipment is an unshakeable unease about treating a virus so new and so unstudied.

“I’m seeing young people come in,” said Lisa Marie Babayan, a physician assistant at UCHealth University of Colorado Hospital, “and they’re people in their 30s, 40s, coming in, and they look one way, you think it’s straightforward, you think you’ve seen it 100 times. Then their vitals are looking worse, they’re not getting better with your supportive care. And you wonder what you’re missing.”

Babayan knows of at least five people she treated who died of coronavirus. The youngest was in their 40s, the oldest in their 80s. One of the five had no underlying health problems.

Though the coronavirus can and does strike and sometimes kill younger people, state and international data show older people at higher risk. The state reports people age 60 and older account for close to 90% of known coronavirus deaths here.

Specializing in women’s cancer treatment, Babayan knows how to talk to people about dying.

“We see it coming. It sucks. I’ve known (patients) for years, and I know it’s going to suck, and I can anticipate that suck. With this, there’s an unknown. You don’t know what’s going to happen to these people,” she said.

Babayan described treating a coronavirus patient who spoke no English. Through a phone interpreter, Babayan, adapting on-the-fly to treat a virus she’s still learning about, tried to talk to the patient, also fearful of this novel affliction, about her options, including inserting a tube through her mouth to help her breath.

“She comes in, she can’t breathe. Eighties. Speaks no English whatsoever. Her oxygen is tanking,” Babayan said. She can barely breathe. “I was trying to have a conversation with her to say that this tube might not ever come out, and do you understand the ramifications? Do you understand it’s very likely you’re going to die with this tube upstairs?”

Babayan isn’t sure if that woman lived or died. It’s hard to keep track. She said she hasn’t felt so uneasy at work since she entered the field.

“I worked so hard to get rid of this feeling, to get rid of feeling inadequate, not knowing what to do,” she said. “That’s been creeping back in.”

On Saturday, Babayan’s only sister was set to get married in Massachusetts. This was supposed to be a 150-person event, and instead there were just a few — the couple, the parents — who planned to gather, and plant a tree. Babayan said she’d use FaceTime to call in.

She also said it’s hard to talk to her family about what work is like these days.

“If my parents knew the stuff I was doing every day, they’d have driven here and camped out,” she said. “I try to downplay what is happening. Why would I let them know how bad it is?”

The “Crisis Standards of Care” acknowledge that the situation is bad right now. The document also lays out plans for what happens if it gets worse. Among the doomsday plans: workers will be allowed to bring in homemade masks, in the event of an even more catastrophic PPE shortage.

But already, there are many begging to be given that permission now. Codi Natelli, a Colorado Springs woman who’s teamed up with hundreds of others to sew and distribute masks around the state — two layers of polypropylene filter material sandwiched by cotton — said she’s been floored by the volume of requests she’d gotten from health care workers.

“I should not have nurses in my driveway in tears because they’re not equipped,” Natelli said. “It’s in the cover of darkness. It’s so clandestine. But they just want to get these masks so they can be protected.”