Colorado has an active volcano, and it’s a big reminder of Mother Nature’s explosive might 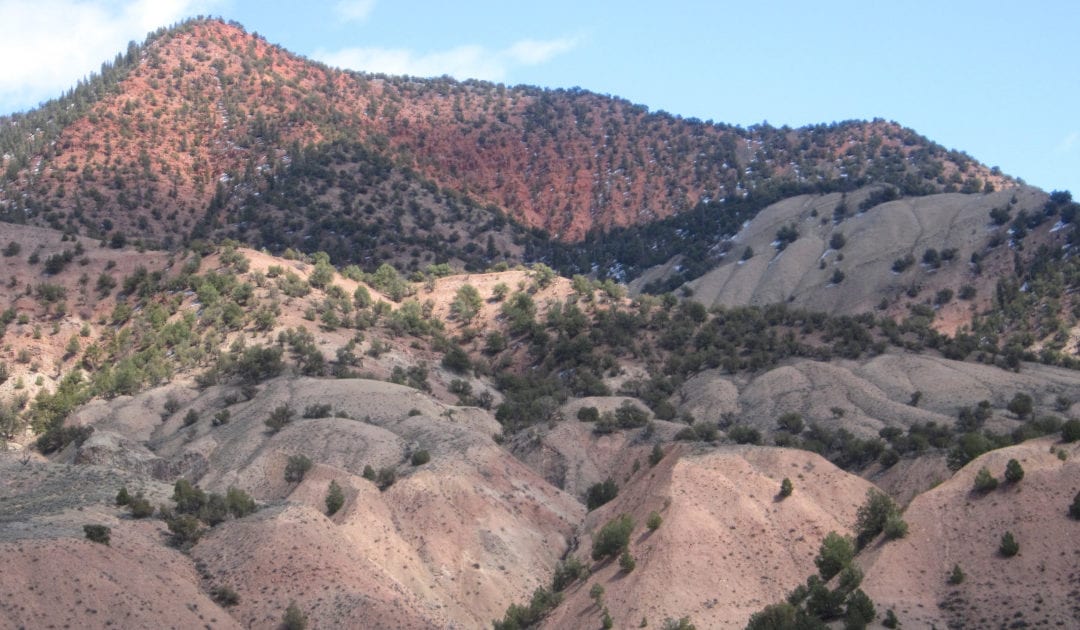 By Seth Boster, The Gazette

DOTSERO — At the base of Colorado’s lone active volcano is a small mobile home park, where on this day a resident offers a fair warning to a pair of curious visitors.

“Is it four-wheel drive?” he asks. He bends down to scoop dark soil that crumbles in his hands. “We have a lot of this stuff, see?”

The stuff is left over from Dotsero’s eruption, estimated to be 4,200 years ago. This was back when the Egyptian pyramids were being built. Back when native tribes roamed this land that appeared much like it does today, the mountains and streams stretching west to what is now called Glenwood Canyon.

According to legend, the name “Dotsero” came from a native term meaning “something new.” Those first residents would have witnessed this modest summit heaving, coughing ash and bleeding lava.

Now travelers of Interstate 70 see the fossilized flow beside the road and behold those ominous, red slopes above. They can exit for a rugged track that, true to local warning, can be treacherous on the way up to the crater.

“A gnarly little drive,” says James Hagadorn, curator of geology at the Denver Museum of Nature and Science. “It’s pretty cool once you get in there, though. It’s like a little oasis. A volcanic oasis.”

Today, “Dotsero remains a mysterious anomaly in the Rockies,” as Colorado Gov. Jared Polis, prone to natural curiosities, put it in an informative string of tweets last year. Today the site serves as a reminder of Mother Nature’s explosive might.

Of course, there are stark, lingering memories of Mount St. Helens, that cataclysmic blast 40 years ago that claimed 57 souls in Washington. Thousands of other mammals perished, millions of trees were leveled and ash flung to towns hundreds of miles away.

If Dotsero were to blow in our lifetime, “it would be like if Mount St. Helens went off in our state,” says Christian Shorey, assistant department head of geology at Colorado School of Mines. Though, he says, it would be at a smaller scale. In terms of volcanoes, Dotsero is more “cute” than fierce, he says.

Volcanoes have different styles, Hagadorn says. “Mount St. Helens has that build-up, explosive style, whereas Dotsero, maybe it builds and does a poof, but it might ooze quite a bit more.”

It might ooze and, as it once did, cause a build-up in what is now the Eagle River.

“I-70 would be closed for at least one year,” reckons Charles Stern, the University of Colorado-based earth scientist. And air traffic could be impacted as well, with Dotsero potentially belching smoke and debris high in the sky.

For all of these possibilities, the USGS deems Dotsero a “moderate” threat. A 2018 government report on the nation’s volcanoes ranked Dotsero 82nd on the risk list, which is topped by Kilauea in Hawaii and Mounts St. Helens and Rainier in Washington, followed largely by other sleeping giants in the Cascades and Alaska.

Rest assured, scientists roundly agree Dotsero isn’t about to wake. Just as they agree the Yellowstone caldera isn’t about to — though its gurgling and gas is being closely monitored. Yellowstone is the only Rocky Mountain region representative worthy of the USGS’ “high” threat level, ranking No. 21 on the list.

“You would get an ash cloud blocking the sun over most of the country for a while,” Shorey says. “You’d have an immediate death zone just from the blast waves and level of ash and whatnot. And Denver, I’ve read, is just on the edge of that.”

Yes, this woe-strewn year of 2020 would seem fitting for such an event.

But while in a time of pandemic, political and social strife, and bigger, hotter and longer-lasting wildfires, we are far removed from the age of volcanoes.

“If I had my magic wish, if I could rub the genie lamp and invent that time-traveling helicopter,” Hagadorn says, “it would be back to 30 to 50 million years ago. Because this was volcano city.”

This was when perhaps the planet’s largest volcanic phenomenon was happening in what is now southwest Colorado. Spanning 22 miles (35 kilometers) wide and 62 miles (100 kilometers) long and visible from outer space, the San Juan volcanic field represents a series of explosions believed to be 5,000 times the scale of Mount St. Helens’ outburst in 1980.

Another Pompeii-like occasion was centered west of modern-day Colorado Springs. Volcanoes spewed avalanches of lava and ash that entombed the sequoias and other ancient specimens now on display at Florissant Fossil Beds National Monument.

For other volcanic remnants, look to North and South Table mountains in Golden. Or to the cliffs of the Flat Tops in the state’s northwest. Or to Pikes and Longs peaks, among iconic monoliths made of granites that formed below volcanoes.

Volcanoes were instrumental in shaping the Colorado landscape we admire today — not to mention instrumental in delivering the gold that put the state on the map and the hot springs we enjoy.

Atop Dotsero, one can only imagine the forces at work below. These are “dynamic” forces, Hagadorn says. “It’s like climate. There’s no static climate, and there’s no static volcanoes or tectonics.”

Still, there are no disturbing signs of eruption here. “But if you’re worried,” Hagadorn says, “just drive by really fast.”