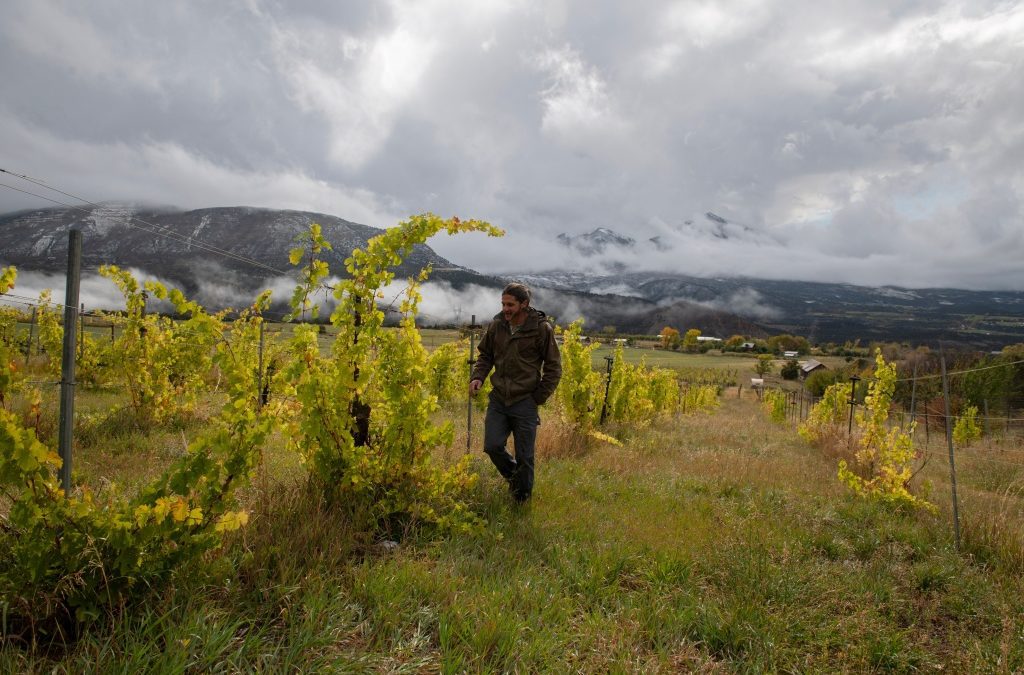 Outside, the temperature in the North Fork Valley is quickly dropping, while inside a 94-year-old cellar tucked into the mountains around Paonia, the air stays cool and constant.

Palms open, Brandt Thibodeaux “punches down” grapes as their natural yeasts get to work fermenting right out in the open. Over the coming weeks, he’ll press out the juice — also by hand — from inside a wooden basket, and then rely on gravity to move liquid between barrels as sediment settles.

In terms of intervention in the winemaking process, this is about as low as it gets.

“We’re constantly thinking about what we can get rid of; we want to strip it down to nothing,” Thibodeaux said of the entirely by-hand method he and partner Courtney Gayer employ at Aquila Cellars. “We’re trying to capture this place, so by not adding anything to the wine, that’s what we’re doing ultimately.”

His “capturing” refers to the terroir of the West Elks American Viticultural Area. As recently as the last decade, this region’s economy ran on coal, then two out of three local mines closed, leaving the North Fork to rely more on its agricultural roots as well as growing wine tourism.

Thibodeaux and Gayer’s Aquila for now is at the fringes of the movement, which revolves around tasting rooms, farm dinners and fruit-picking orchards. But behind the scenes, from the circa-1927 hillside cellar, they’re considering the future of land management in the North Fork. And they’re not alone in prioritizing conservation alongside a young startup.

Winemaker Brandt Thibodeaux mixes fermenting grapes by hand in a traditional winemaking process at Aquila Cellars near Paonia, Colo., Tuesday, Oct 12, 2021. This process helps with extraction and can keep bacteria from growing on the cap of grape skins that naturally would float to the surface.

To keep track of fermentation and flavor, winemaker Brandt Thibodeaux tastes a few different wines in a near century-old fermentation room at Aquila Cellars near Paonia, Colo., Tuesday, Oct 12, 2021.

Just north of the valley, Chris Caskey waits each high summer season as water levels dip low enough in the Paonia Reservoir for his crew to drive an excavator right down the boat ramp and onto the mud flats for collecting sediment.

Caskey’s business, Delta Brick & Climate Company, takes what has essentially jammed up the valley’s main water storage system over the last half-century and puts the muck to use, turning clay into ceramic tiles, bricks and pavers out of a factory in nearby Montrose.

His plan is bigger still: to build a tile plant closer to the reservoir, atop an abandoned mine in the North Fork, where he’d capture methane that’s still venting from the closed site and destroy the pollutant, using it to fire ceramics.

“We started a few years ago with the goal to use mud out of the reservoir and use gas coming out of coal mines,” Caskey explained. “Both of those are really enormous challenges, and this company isn’t scaled to suit those challenges. But the goal is to show that climate action can be a good thing for communities, not just a scary thing.”

If things go as planned, Caskey’s work in sediment removal and methane capturing will help the vineyards and farms downstream in Paonia and Hotchkiss, where growers are in desperate need of water. Their crops are at the mercy of a worsening Western Colorado drought; sometimes, the water in any given growing season just runs out.

Husband-and-wife AJ and Nicole Carrillo kept this looming water shortage in mind as they were looking for property to farm in Colorado five years ago. They chose Hotchkiss in the North Fork for its financial accessibility (then) and for the opportunity to have water rights. But they’re not taking anything for granted.

At their 18-acre Deer Tree Farm and Agroforest on Rogers Mesa, they’ve transformed a 5-acre peach orchard and alfalfa fields with the addition of grazing livestock, a market garden, irrigation and 4,000 more planted trees, creating a regenerative polyculture on the land.

“This is fundamentally a restoration agriculture project,” AJ Carrillo said, “where you take a degraded or neglected piece of land … and improve that asset with natural patterns and agricultural or ecological restoration.”

To complete the circle, the Carrillos have sold their fruit and proteins, and they started catering (Nicole’s other business, Forage Sisters) and landscaping for hire. Between it all, they became profitable in their first year running the farm.

“And then our baby came, and everything we were pulling off just became unsustainable,” AJ Carrillo said.

After their daughter was born, the Carrillos “realized that we had accomplished our goals. We set something up for the future, something that another farmer can (take over) and have a huge leg-up. We’ve basically set up a turnkey farming ecosystem. And I feel really good that we can pass something along to the next stewards of this land.”

They’ve listed the property for sale and are moving back to the Front Range to be closer to family and continue working in food preparation and regenerative agriculture consulting. It’s one outcome that startup business owners have to consider working in a resource-rich region that’s low on other benefits, like infrastructure and capital.

Caskey with Delta Brick doesn’t have a retail presence in the valley, for example, because he hasn’t been able to find or afford it yet. And neither do Gayer and Thibodeaux of Aquila. Instead, they’ve figured out a lower barrier to entry by staying mobile, in a way.

For the natural winemakers, economic necessity led them to buy their fruit from existing landowners and growers across the West Elks, and especially from vines that are otherwise being “neglected.” The winemaking process at Aquila starts with a handful of vineyards strewn across the valley that Thibodeaux and Gayer see as opportunities.

They’ll drive around scanning the land. “If I see a vineyard and it looks like (expletive), I’m gonna pull over and knock on the door,” Thibodeaux said. Often, the property owners just happen to have old, unattended vines on their lands. So Aquila offers them a higher premium for their fruit, and in turn works with the landowners to incorporate biodynamic farming practices that produce higher-quality grapes.

Like low-intervention winemaking, this growing style treats the vineyard as a self-sustaining ecosystem, focusing on natural processes and avoiding any outside chemicals or pesticides. Thibodeaux first learned of the philosophy while working as vineyard manager at Jack Rabbit Hill, a certified-biodynamic farm and wine, cider and spirits producer in Hotchkiss.

And while established farms like Jack Rabbit Hill lead the way for younger businesses in the region, Thibodeaux worries that, in terms of growing practices and grape varietals, “the majority of growers in the valley, a lot of them are taking viticulture in the wrong direction.”

Business owners like Thibodeaux and Gayer, and Caskey of Delta Brick, aren’t compromising on their environmental principles. They’re also still figuring out their place in a changing North Fork economy, as well as how to be profitable in their endeavors.

“My litmus test,” Caskey said, “is if a person makes their living in town, can they afford to buy a house in town? And those are the kind of jobs that I am trying to generate here. Obviously that means we’ve got to be exporting something meaningful.”

Delta Brick and Climate Company founder Christopher Caskey looks at a pile of mud harvested from the Paonia Reservoir at the companyÕs brick facotry in Montrose, Colo, Monday Jan. 25, 2021.

Photos by William Woody, Special to The Denver Post

LEFT: Ceramic tile in various stages of production, made from Paonia Reservoir mud, sit at the Delta Brick and Climate Company in Montrose, Colo, on Monday Jan. 25, 2021. RIGHT: Another view of the ceramic tile that same day.

For the Carrillos, an established catering business base exists all over the state, they say. And regenerative agriculture is something that can be applied to properties as large as Western Slope farms and as small as landscape gardens along the Front Range, which AJ hopes to advise, spreading the word about agriculture that’s ecologically, socially and economically beneficial — or the triple bottom line.

He’s seen it work firsthand in the North Fork. Alongside these small businesses looking to make change in the valley are organizations connecting them with state and federal politicians for support, and providing more resources for those interested in preserving the land.

The Colorado Farm & Food Alliance, for example, offers an incubator program with small farmable plots, plus curriculum, workshops and mentorships for aspiring farmers.

“Because of the success story of this valley, this region I think has the potential of influencing policy,” Carrillo said. “We do have some congressional attention from our senators (Michael Bennet and John Hickenlooper), and that puts us in a really special position in the North Fork, because we have a voice. We’re in a position to pave the way for other towns and counties throughout Colorado to set that good example of restoring our land not just one farm at a time but with each piece of our communities.”