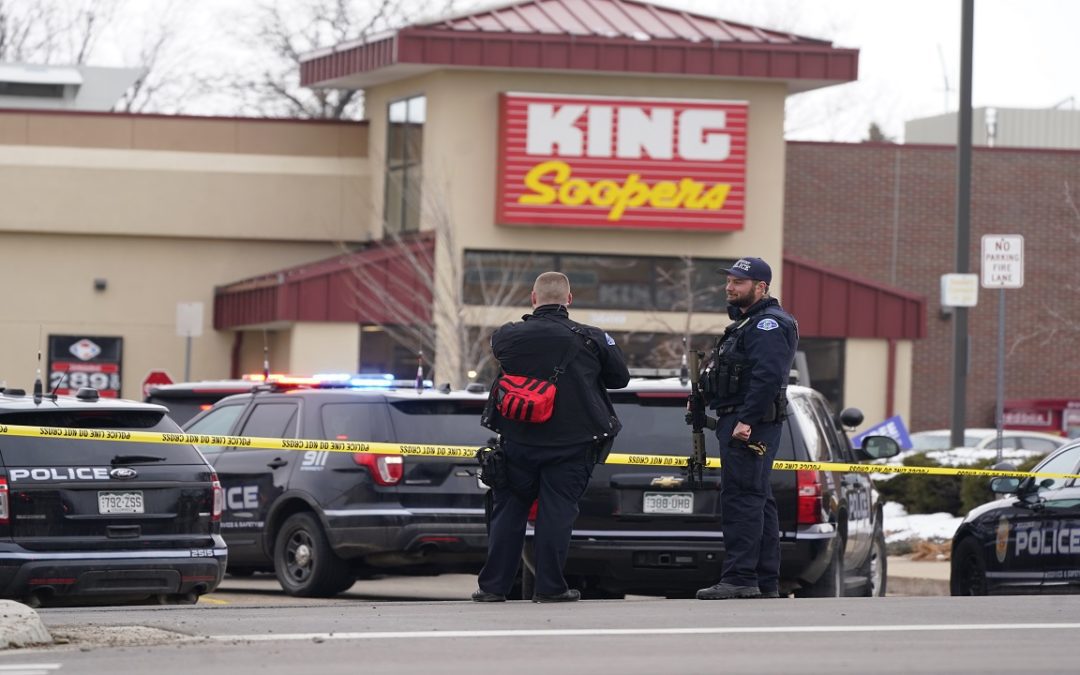 Fox News correspondent Jeff Paul reports from Boulder, Colorado with the latest on the investigation into the suspect.

A man charged with killing 10 people at a Colorado supermarket surrendered after being shot by a police officer who waited for him to come into view down a store aisle, according to new information about the shooting released Thursday.

The details were contained in a district attorney’s report that found Boulder officer Richard Steidell was justified in shooting Ahmad Alissa and said his shots stopped the attack.

“Officer Steidell’s shots were the last ones fired by anyone inside the King Soopers on March 22,” District Attorney Michael Dougherty said in the report.

Police work the scene outside of a King Soopers grocery store on March 22 where a mass shooting took place in Boulder, Colo. (AP)

Alissa is accused of killing nine shoppers and workers inside and outside the store as well as Officer Eric Talley, one of the first three police officers who entered the store. He also was charged with attempted first-degree murder after authorities said shots were fired at 19 other people, including 11 law enforcement officers.

Alissa’s defense team has suggested he suffers from mental illness. But they have not offered any other details about his condition.

According to the new report, Steidell was part of the second wave of police officers who entered the store after Talley was killed near the cash registers.

About 20 seconds later, shots were fired over their heads, with one bullet passing between the heads of two officers. Steidell dove to the ground and fired his handgun at a man he saw holding a long gun down an aisle.

A man charged with killing 10 people at a Colorado supermarket surrendered after being shot by Boulder Police Officer Richard Steidell, shown here, who waited for him to come into view down a store aisle, according to new information about the shooting released Thursday. (AP)

The gunman withdrew from view. Steidell remained on the ground, still and pointing his gun down the aisle. When the gunman came back into view about 90 seconds later and raised his weapon, Steidell fired at him, the report states.

It was later determined that one of his eight shots — the only ones fired by police during the ordeal — hit Alissa in the right thigh.

Steidell, a Coast Guard veteran who has been with Boulder police since 2019, was placed on paid leave while the district attorney’s office and outside law enforcement agencies conducted a standard investigation of his decision to shoot at Alissa.

The 31-year-old Steidell, who was awarded pistol sharpshooter and rifle marksmanship ribbons in the military, will return to duty Friday now that the district attorney has found his actions were justified, police spokesperson Dionne Waugh said.