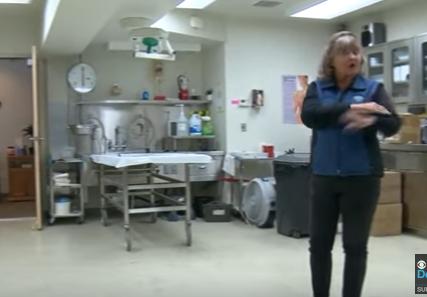 Grand County Coroner Brenda Bach said that two people who died in her county were killed by gunshot wounds, but the state recorded the deaths to COVID before she even finished the autopsies. The coroner is sharing her story in hopes that it will influence others to come forward to change the way that data is collected and reported. -GEG

Grand County Coroner Brenda Bach said that two people who died in her county were killed by gunshot wounds, but the state recorded the deaths to COVID before she even finished the autopsies. The coroner is sharing her story in hopes that it will influence others to come forward to change the way that data is collected and reported. -GEG

Check out our Classified ads at the bottom of this page.

Private money was used to fund city and county election managers. The director of the investigation said, “This report paints a clear picture of a cabal of billionaires and activists using their wealth to subvert, control, and fundamentally alter the electoral system itself.”

Grand County Coroner Brenda Bach said that two people who died in her county were killed by gunshot wounds, but the state recorded the deaths to COVID before she even finished the autopsies.

1. The vaccine studies are faulty and designed to make them succeed.
2. Only 0.6% of people worldwide are at risk of dying from Covid-19, so it is not therapeutic to vaccinate the masses.
3. RNA vaccines will forever alter recipients’ DNA.
4. No mRNA vaccine has ever before been licensed for human use.

Some of the vaccine trial volunteers were diagnosed with Covid-19 after the first dose, so they were not counted, because it would have reduced the claimed 94.5% efficacy rate. The drug companies need a high efficacy rate, because the survival rate without vaccine is higher than 99% for people under 70 years of age.

After taking Pfizer’s experimental mRNA Covid-19 vaccine, 2 workers at the same hospital in Alaska suffered severe allergic reactions and had to be injected with epinephrine and other drugs. Pfizer’s Covid-19 vaccine is an experimental vaccine that received emergency-use authorization, and it has not been fully tested.

Tiffany Dover, the Nurse Manager at CHI Memorial Hospital in Tennessee, fainted on live television just 10 minutes after receiving the Pfizer COVID-19 vaccine on Thursday while promoting the vaccine.

In 1976, the swine flu vaccine killed 300 people and thousands were injured even though the CDC was warned of neurological disorders from the vaccine. The head of the CDC resigned over the scandal. Currently, the deaths of 6 people in the Pfizer vaccine trial is not being reported in the mainstream media.

Black Lives Matter is planning to start a bank early next year to push capital to black-owned firms. The Tides Foundation that pushes leftist causes enables donors to mask their identities from public scrutiny. This money likely will be funneled to organizations that work to suppress opposition to leftist agendas.

It is unknown whether the existing nanotechnology for drug delivery has been used to deliver Covid-19 vaccines through nasal swab tests. This article describes several methods of delivery that include intranasal administration that can bypass the blood-brain barrier and deliver chemicals directly to the brain.

If Schwab says we must prepare for a specific crisis, it likely means it is in the works. A cyber pandemic means loss of the Internet and possibly electrical power for an extended period of time – months or years.

Sheriff Don Barnes rejected Superior Court Judge Peter Wilson’s order to release of 1,858 dangerous inmates over concerns about spreading Covid-19. Sheriff Barnes said that low level offenders have already been released and what remains are dangerous criminals that include murderers and child molesters.

The two vaccine companies, Pfizer and BioNTech, excluded people from their drug trials with a history of allergic reactions. Therefore, the performance of the vaccine looked safer than it will in the rollout. Past efforts to introduce RNA technology have failed, because serious autoimmune reactions occurred.

The contested election is not over. Several states sent Republican Electors to cast alternate votes. Vice President Pence will have full authority as president of the Senate on January 6, the day the Electoral votes are officially counted, and he will accept or reject motions to decide the next steps.

Out of 220,000 claimed Covid-19 deaths, 88,208 were patients who died from pneumonia and the flu, 17,798 died from chronic respiratory diseases, and over 51,000 patients died from heart attacks. Over 131,000 cases diagnosed as Covid-19 deaths already had life-threatening diseases.

Inventor Jovan Hutton Pulitzer explains how millions of ballots can be digitally examined in a day to prove whether they are are authentic. His approach examines physical artifacts from multiple scanning touch points that are placed on mail-in ballots. He says fraudulent ballots lack these essential marks.

The concerns are totally justified. This issue is more important than one might suppose inasmuch as there is a large body of evidence that one of the specifications in the design of vaccines has been population reduction.

For classified advertising rates and terms, click here. The appearance of ads on this site does not signify endorsement by the publisher. We do not attempt to verify the accuracy of statements made therein or vouch for the integrity of advertisers. However, we will investigate complaints from readers and remove any message we find to be misleading or that promotes anything fraudulent, illegal, or unethical.

Offline is a documentary on the inevitability of the Earth being slammed by a mega solar flare – not the common type that interrupts communications and creates a light show in the Northern skies – but the big brothers thousands of times more powerful. These monsters deliver enough energy to blow apart the master transformers that supply the planet’s energy grids. When that happens, the lights go out for longer than anyone wants to think about. These X-Class solar storms hit the Earth every 150 years, on average. The last one arrived 156 years ago. We are overdue ()