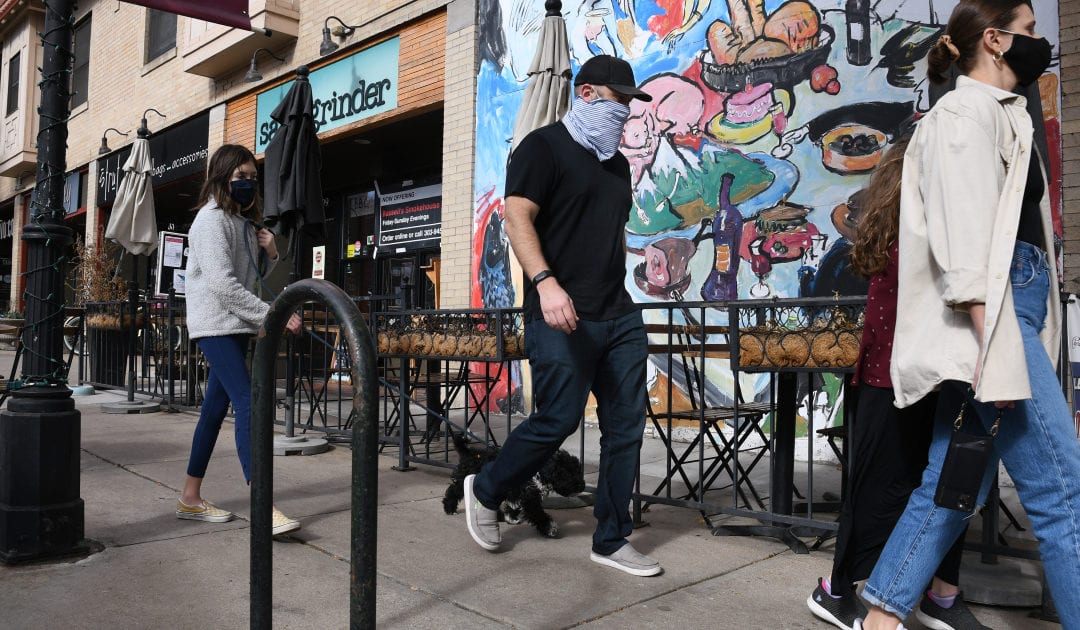 Gov. Jared Polis announced new coronavirus restrictions Tuesday aimed — at least temporarily — at preventing about half of Colorado’s counties from being forced into lockdown as COVID-19 sickens more people and fills more hospital beds each day.

The new mandates are intended to give counties with a worsening COVID-19 situation another chance to improve before returning to an all-out stay-at-home order as the Democrat issued in the spring.

Coronavirus is running so rampant in many counties — including Denver, Adams and Jefferson — that they should already be locked down under metrics defining the state’s old dial system. Roughly half of the state’s counties Tuesday morning were teetering on the edge of having such bad rates of coronavirus cases and hospitalizations that they would meet the criteria for a lockdown.

“We clearly need a more drastic shift in behavior,” a somber Polis said at a news conference at the governor’s mansion in downtown Denver where he announced the new restrictions. “Absent intervention, it just keeps getting worse.”

Polis changed the state’s dial system to make the red level — which used to be the point at which counties were forced to lock down — less severe. He hopes that will prevent “even more devastating or drastic steps, like a lockdown or shutdown.”

The biggest change for counties at that level is that they must now shutter indoor dining and that personal gatherings are completely outlawed. Counties at the red level are not, however, required to fully lock down. Retail businesses and offices may remain open.

Other restrictions for counties at the red level include:

Colleges, universities and K-12 schools are allowed to remain open, though the state recommends they shift to online learning except for students in fifth grade and below.

On Tuesday night the state released a list of 15 counties that will be placed under the red level on Friday:

The Colorado Department of Public Health and Environment says a new level — purple — will be added to the bottom of the dial for counties facing an even worse coronavirus situation. That becomes the new lockdown level.

The changes to the dial will be effective on Friday, CDPHE said. The state on Tuesday night released an updated public health order outlining the changes.

“We have great confidence this path will succeed,” Polis said. “It’s not a given.”

He added: “If we didn’t have cause to believe that this would work, then we wouldn’t be taking this step.”

Denver Mayor Michael Hancock, who was also at Tuesday’s news conference with Polis, asked people to follow the new rules to prevent further restrictions from being enacted.

“If we’re going to reverse the trend, we must move now with additional measures before more drastic steps have to be taken,” he said. “I’m calling on Denver and the metro region to step up like we’ve done before to push back mightily on this virus and get back under control. The blunt-force response of another stay-at-home order can be avoided.”

Hancock urged Denverites to stay at home as much as possible and put social gatherings on hold for the time being.

Polis and local officials have resisted the idea of issuing new lockdown orders for weeks, fearful, mainly, of economic fallout. Instead, they’ve been pleading with the public to adhere to mask-wearing restrictions and social-distancing guidelines.

Recently, Coloradans have even been urged — and required in some places, including Denver — to cancel plans with people outside of their households.

None of those requests or last-ditch mandates, however, have been effective, and Polis was forced last week to prepare in earnest for hospital capacity to be surpassed in the coming weeks.

As of Tuesday morning, more than 1,300 Coloradans were hospitalized because of the coronavirus — by far the highest number since the pandemic began. The state’s seven-day average daily case count has surpassed 4,000, another record. Colorado’s test positivity rate average over the past week is 12.61%, well above the 5% level considered acceptable by the World Health Organization.

“Do I expect these case numbers to be dropping in the next week?” Dr. Eric France, the Colorado Department of Public Health and Environment’s chief medical officer, said on Thursday. “I don’t know that they will.”

Also on Tuesday, Polis confirmed that he will call a special session of the Colorado legislature, urging lawmakers to swiftly pass bills that can help people weather the economic effects of the new restrictions. He said the state has been forced to act in lieu of new federal relief.

Polis said he hopes the legislation will “bridge us to the vaccine.”

The governor said the details of the special session are still being ironed out, but that they are expected to be finalized before the end of the week. His aim is to provide north of $200 million in relief, which he recognizes won’t come close to matching congressional aid.

“We cannot possibly do what the federal government can do,” Polis said. “We can’t do an economy-wide (Paycheck Protection Program). We can’t do a $1,200 assistance to every Coloradan. But none of that is an excuse for us not to do what we can to ease the pain and difficulty of small businesses and the people of Colorado.”

Among the topics state lawmakers are expected to tackle are:

“Our states recovery could hinge on the next few months,” said Colorado House Speaker-designate Alec Garnett, a Denver Democrat. “Targeting relief now to those small businesses and those hardworking families will have the greatest multiplying effect for our local economies.”

Garnett says lawmakers plan to use tax revenues the state wasn’t expecting to pour in to cover the stimulus’ costs.

Garnett said some people may ask why the legislature can’t just wait until it returns for its regular session on Jan. 13 to take action.

“Frankly,” he said, “January will be too late.”