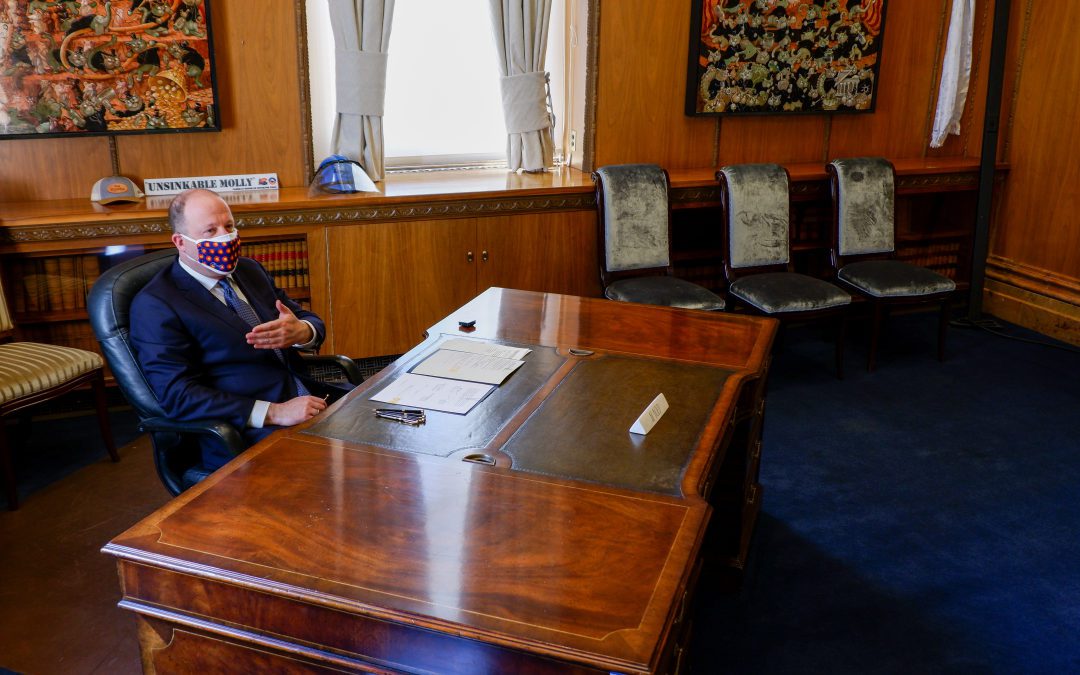 Colorado Gov. Jared Polis strongly indicated he would veto a bill from fellow Democrats to speed up the state’s reductions in greenhouse gas emissions, setting up a fierce intraparty brawl at the Capitol over how to address climate change.

The measure, Senate Bill 200, would set firm caps on emissions for key sectors of the economy and give the Air Quality Control Commission power to enforce those caps.

“We’re not willing to give dictatorial authority over our economy to one unelected board that lacks the broader mandate and expertise,” Polis told the editorial board of The Gazette in Colorado Springs when asked if he would use his veto power to stop the policy from becoming law.

Members of the Air Quality Control Commission are appointed by the governor and confirmed by the Senate.

Senate Bill 200 is still early in the lawmaking process. It’s slated for its second statehouse committee on Wednesday afternoon.

Sen. Faith Winter, a Westminster Democrat who is championing the measure, vowed to push forward.

“Coloradans overwhelmingly want climate action,” she said. “This legislation merely puts the governor’s own climate roadmap into law. I’m ready to keep working on this bill, and there are still many steps left in the legislative process. I look forward to partnering with Gov. Polis to take action on climate.”

The dispute between statehouse Democrats and Polis is the most public disagreement the two sides have had during the 2021 lawmaking term. It harkens back to Polis’ first year in office, when he frequently clashed with legislators over their shared — and sometimes differing — policy and budget agendas.

Polis already was expressing displeasure with the bill, with his spokeswoman recently telling The Colorado Sun in a written statement that “we cannot support hard sector-specific emissions caps as the bill outlines.” The veto threat only serves to escalate his displeasure with the legislation.

Polis told The Gazette’s editorial board that he thinks state entities will meet the climate goals on their own and don’t need mandates. Environment groups, however, worry the state is already behind on meeting its benchmarks.

Senate Bill 200 is supported by Democratic-aligned advocacy groups, including Conservation Colorado and Western Resource Advocates. They were unhappy Wednesday with his veto threat, but see it as more of a negotiating strategy than a real danger to the legislation.

“A veto threat seems pretty consistent with Gov. Polis overall approach to air pollution which is to talk a big game but not actually do anything to achieve it,” said Robert Ukeiley, senior attorney for the Center for Biological Diversity.

Ean Tafoya, cochair of the Colorado Latino Forum, accused Polis of “ignoring the cries of those most impacted by environmental problems.” The forum are especially interested in the parts of Senate Bill 200 dealing with environmental justice, including the creation of an ombudsman position.

“He may speak Spanish, but he doesn’t have us at heart,” Tafoya said of Polis.

(The governor’s office says Polis does support the creation of an environmental justice ombudsman position.)

The measure would set caps on emissions, in millions of tons of carbon per year, for a wide range of economic activities, including power plants, oil and gas operations and transportation.

Other key provisions in the bill include: