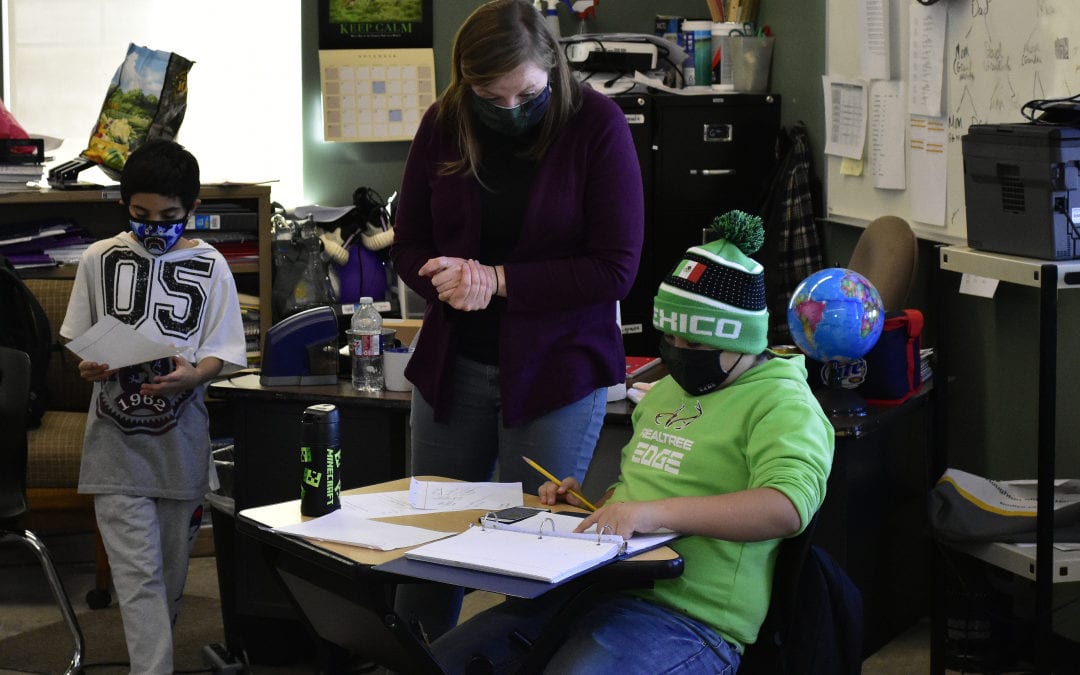 The question of whether Colorado should press forward with standardized testing for elementary and middle school students in 2021 despite the coronavirus pandemic is gearing up to be one of the biggest education battles at the statehouse this year.

The debate is also serving as a proxy war for the longtime fight over the effectiveness of the assessments, even though if the tests are conducted this spring they would not be used to evaluate teacher performance, which is normally the main sticking point.

On one side are opponents of the testing, including the Colorado Education Association, who say it’s not possible to conduct assessments the right way given that students are in and out of in-person classes and under a great deal of stress because of COVID-19. Inaccurate results could lead to misplaced solutions.

On the other side are groups who appear to have the support of Gov. Jared Polis and say without testing there will be no way to determine how far behind Colorado students have fallen and which districts need the most financial help to address those deficiencies.

“I think it’s probably the most contentious (issue) just because you have some legitimate arguments on both sides,” said Sen. Rachel Zenzinger, an Arvada Democrat and former teacher who is pushing for the tests to be called off in 2021.

Colorado canceled its standardized testing for students in 2020 because of coronavirus after receiving a waiver from the federal government. A group of state lawmakers — three Democrats, including Zenzinger, and one Republican — are planning to introduce a bill in the coming weeks that would direct the Polis administration to seek another waiver.

Polis, who would have to sign the bill for it to go into effect, appears to support the testing as planned, pitting him against his party, the state’s largest teachers union and many superintendents. His position may mean that any effort to stop the assessments could be  vetoed if it reaches the Democrat’s desk.

“The first step to helping our students recover is to understand the gaps that exist across the state,” spokesman Conor Cahill said in a written statement to The Colorado Sun. “… We believe that these critical measurements will help us build back stronger for Colorado’s students.”

Asked to clarify if Polis supports the testing, Cahill referred The Sun back to his statement.

Katy Anthes, Polis’ Colorado Department of Education chief, isn’t taking a position on the matter. A spokesperson noted she won’t decide whether the testing happens but that Anthes “understands the varying perspectives on the issue and in fact agrees with the many valid concerns.”

The debate will heat up quickly when the legislature returns on Feb. 16. Lawmakers must act before April, when the Colorado Measures of Academic Success tests are scheduled to start being administered to children in grades 3 through 8.

Proponents and opponents of allowing the testing this year are not split along partisan lines, meaning it’s difficult to gauge if there will be enough support for the legislation to pass in the Democratic-controlled statehouse. There’s also a chance that even if Colorado requests a waiver from the Biden administration, it could be denied.

“We do deserve, and parents deserve, information on how their kids are doing,” said Jen Walmer, Colorado state director for Democrats for Education Reform and Education Reform Now Advocacy, which are advocating for the testing to happen. “… We 100% recognize and appreciate the very difficult circumstances that have faced our teachers and our schools this year. But the educational system is designed to educate kids and I, personally, don’t want to lose sight of what kids need.”

Walmer sees efforts to cancel testing this year as being linked to broader opposition to the assessments, which are required by federal law and have federal funding attached.

Walmer’s organizations partnered with Colorado Succeeds and Ready Colorado, a conservative-leaning education group, to pay for a poll gauging where Coloradans stand on the issue.

Democratic-leaning Keating Research conducted the survey between Jan. 5 and Jan. 10 among 600 active, registered voters, 27% of whom have a child or children in the K-12 school age range. The margin of error was 4 percentage points.

Of those surveyed, 46% said they support standardized testing for public school students in grades 3 through 8 that evaluate “student learning, skill acquisition and academic achievement at the conclusion of the school year” despite the disruptions of the coronavirus pandemic. Another 41% said they oppose; 13% said they didn’t know or weren’t sure how they felt.

When asked about their feelings on the testing knowing the results “would be used only to determine the amount of student academic learning loss and to identify school and district trends without high-stakes implications,” support jumped to 62%. Opposition was 25%, with 12% saying they didn’t know or weren’t sure how they felt.

Walmer said the polling results “are pretty compelling” and “clearly show this isn’t a divisive issue” for parents across Colorado.

But for state Rep. Emily Sirota, a Denver Democrat who is bringing the bill to ask for a federal waiver, allowing the testing to move forward this spring is absolutely the wrong thing to do.

“Trying to conduct CMAS this year, logistically, no one has actually been able to make the case as to how this could actually be conducted in a way that is fair, that would accurately measure anything,” she said. “There is no telling how folks might attempt to use that data. It’s not comparable to anything.”

“There’s no way that the individual variables and factors that go into taking this test are going to be standard,” she said. “… I want to make it very clear that I’m not in the camp that wants to just permanently eliminate these tests. I think we need to have a conversation about that. I think now is not the appropriate time to have that conversation.”

Sirota agrees. She, too, wants to untangle the debate over testing this year with the broader battle over assessments.

“I think we need to set those arguments aside and think about what is best for our students and families right now in these conditions,” she said. “I don’t see a benefit. There are other ways to measure where children are at, the needs of a district.”

George Welsh, superintendent of Cañon City School District, also opposes testing students this spring, unsure that districts will be able to accurately measure their students’ academic gains and losses and compare them to last year.

“I don’t see how the numbers are really going to be valid in the end,” said Welsh, whose opinion on state testing has evolved this school year.

He’s also concerned that districts will have to quarantine some students during the testing window because of potential exposures to COVID-19, further complicating the administration of the assessments.

Welsh said most districts give their students local assessments — which indicate how students are faring with their learning — though remote learning has complicated teachers’ ability to roll out those tests to students one on one. Taking a pass on state testing this year, he said, could save districts a significant amount of time — time that could be better spent on lessons.

“We gain a bunch of instructional time that otherwise would be spent preparing for administering those tests,” Welsh said, adding that it’s a fairly complicated process.

Amie Baca-Oehlert, president of the Colorado Education Association, the state’s largest teacher union, is adamant that schools “need to commit every single second to instruction.” As a parent, she said, she is concerned about students potentially going weeks without instruction for the sake of an assessment.

Joanna Rosa-Saenz, a parent of three students enrolled in Denver Public Schools, is more confident in her kids’ teachers than she is in a standardized test when it comes to tracking their progress.

“I measure by them,” Rosa-Saenz said. “This is their passion. This is why they become a teacher.”

Rosa-Saenz has long opposed standardized testing, opting her own children out of it. Every kid learns differently, she said, and standardized tests don’t fit every student’s preferred mode of learning. She also doesn’t want to add any more stress to her children’s academic life after a year of pandemic-driven disruptions, noting that the social-emotional health of students should be the top priority.

State Sen. Jeff Bridges of Greenwood Village is a Democrat who wants to proceed with the testing. He recognizes testing this year wouldn’t be as accurate, but he thinks the results would still be valuable.

“It will give us at least a rough idea of the learning loss we’re seeing across the state,” he said. “We don’t know how severe that loss is, and we don’t know the geographic distribution. That data will help us make better, more informed decisions about how best to support our students and teachers moving forward.”