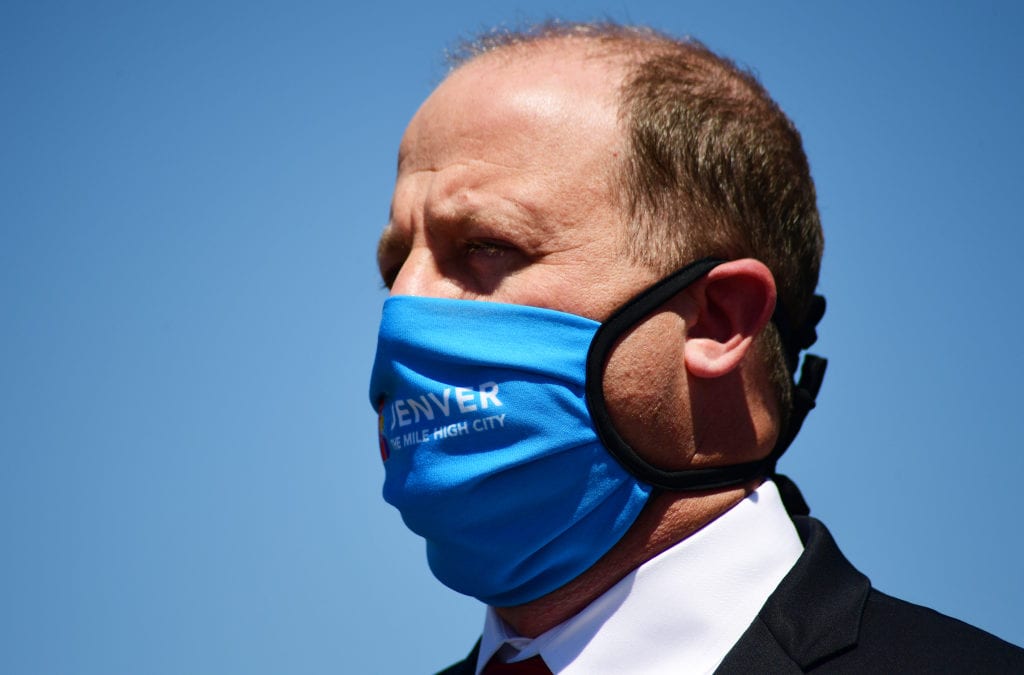 Colorado Gov. Jared Polis on Thursday issued a statewide mask mandate Thursday afternoon, after days of pressure from his fellow Democrats to make the move.

Polis announced at a news conference that he had issued an executive order requiring everyone 11 and older to wear a mask or other facial covering while in public indoor spaces, including all retail stores. The order is effective at midnight and runs for at least the next 30 days.

“Look, in Colorado, there’s no shirt, no shoes, no mask, no service,” Polis said. “Very simple.”

Sheriff’s offices in El Paso and Weld counties, two conservative strongholds, quickly reacted by saying their deputies would not enforce the orders.

Said Polis on Thursday, “Wearing a mask is not a political statement. I don’t know how, in anybody’s mind, this became a game of political football.”

The governor’s order follows four straight weeks of rising COVID-19 cases in Colorado, including a 40% increase last week, according to state health officials. Hospitalizations for the coronavirus also are increasing, and state epidemiologist Rachel Herlihy said that current trends could mean Colorado’s ICU bed capacity will be exceeded in September.

“The data is beginning to be alarming,” Polis said.

The governor has consistently advocated for mask wearing, and has at times been uncharacteristically forceful about it, including in a recent Facebook post in which he described anti-maskers as “selfish bastards.” But as recently as Tuesday, Polis said he wasn’t convinced that ordering masks, as opposed to simply encouraging them, would increase compliance.

Polis previously had said mask orders are not enforceable, and while he did not backtrack that stance on Thursday, he did say that it’s not enforcement, but rather “the mere clarity of message” of mask ordinances, that he believes will be more effective in improving compliance.

Still, the threat of enforcement is baked into the new executive order. People who don’t wear masks in places they are required may be prosecuted for trespassing, the order states.

Polis was joined by Denver Mayor Michael Hancock, who issued his own mask order on May 1, and Aurora Mayor Mike Coffman, who called face coverings the “least invasive and least costly public health option” to combat the coronavirus.

Coffman said he wasn’t in favor of a mask order a few weeks ago.

“But now it’s different. And now I’m worried. A lot of people are hurting,” he said.

Added Polis, “We need a coordinated, unambiguous state message with moral clarity and scientific clarity, and we’re providing that today.”

Both Hancock and Coffman privately urged Polis to issue a stay-at-home order in the spring well before he actually did it. And both men suggested in their remarks Thursday that they’ve been waiting on Polis to come around in this case, too. They are among a chorus of public officials who’ve warned against a patchwork of city and county ordinances that can lead to confusion and diminish compliance.

There’s a smaller but still significant chorus of Republicans who have believe the governor’s orders have been excessive. And while the governor and many others have said that mask-wearing shouldn’t be political — it’s public health experts, after all, who say this practice is necessary — not wearing a mask has quickly become a political statement in this state and elsewhere.

Patrick Neville, the minority leader of Colorado’s House GOP, said in a tweet that he may sue Polis over this latest order. Lauren Boebert, the congressional hopeful from Rifle, issued a statement saying that Polis is “attacking our personal liberties.”

Officials from El Paso and Weld counties were not critical of Polis, but did both indicate that while they’ll encourage mask use, they won’t enforce the governor’s order.

“We’re not going to be actively policing this,” said Joe Moylan, a spokesman for the Weld County Sheriff’s Office. “If we see someone without a mask on, we’re going to ask them to put one on, and if they don’t, we’ll ask them to go home.”

The El Paso County Sheriff’s Office announced on Twitter that its deputies won’t issue citations to people who don’t wear masks, writing, “We cannot afford to take actions that further erode the public trust in us.”

There are several groups exempt from the mask order, including religious officiants; people eating in restaurants (their exemption only applies when seated at their table); people receiving personal grooming service, such as a beard trimming; people exercising alone; and law enforcement and other “public safety personnel.”

The governor announced that in addition to the mask order, because of the rising cases, he’s putting two-week pause on state variances — the exceptions that the Colorado Department of Public Health and Environment issues to counties allowing them greater leniency than statewide coronavirus restrictions require.