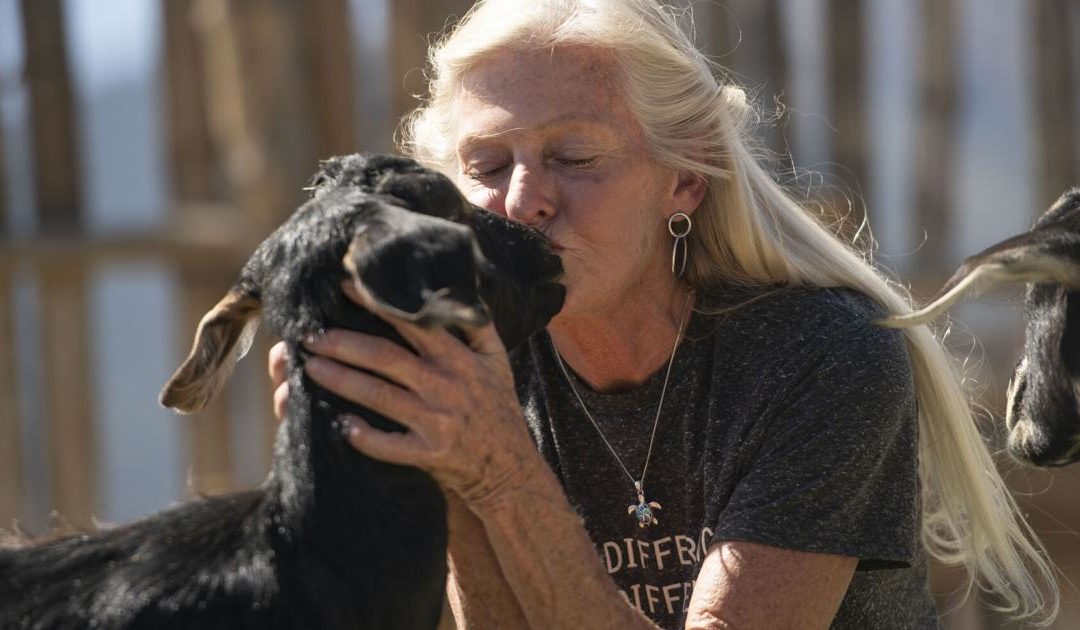 BUENA VISTA • Her brothers made her do it.

When 10-year-old Dawn Jump spotted baby goats at a fair, her brothers — all six of them — shook their heads. They didn’t see value in bringing the goats home to the family’s cattle ranch on the eastern plains of Colorado. Where she saw cute faces, they saw nuisances that would eat Mom’s fruit trees. They called the goats “worthless.”

Some of the cheese produced by Jumpin’ Good Goat Dairy.

After saving profits from selling worms to a pet store, Jump had $35 worth of pennies to put toward a goat she named Charlotte. She trained the goat and found ways to prove its worth, like how it made for a good companion for horses.

Decades later, a lifelong love for goats has led to this: Jumpin’ Good Goat Dairy, an artisan cheese company that the fifth-generation farmer founded in 2002.

Dawn Jump has loved goats since her childhood. Now she’s the owner of Jumpin’ Good Goat Dairy, an artisan cheese company that the fifth-generation farmer founded in 2002 in Buena Vista.

People from across the country stop after seeing the colorful sign off U.S. 24. It shows the face of a cartoon goat, wearing mascara, red lipstick and a necklace.

It’s unexpected, sort of how Jump might look compared with a typical farmer. On this day, she wears short jean shorts, sneakers and a T-shirt adorned with the words “Be the difference” while she shows visitors around her farm, which stretches more than 300 acres. Her long silver hair flows softly in the breeze as she walks around, her miniature Australian shepherd Dally alongside her.

As she goes through the gate, 50 or so goats swarm her. “Don’t eat the hair now,” she says.

Dawn Jump gives her goats love and attention at her home and where she runs her artisan goat cheese company, Jumpin’ Good Goat Dairy.

According to her driver’s license, Jump is 5-foot-4, but she admits “that might be a stretch.”

That’s one reason she feels a connection to goats. They’re much easier to handle than the cows she used to have around. One cow ran over her foot, which resulted in a bad break.

Thinking about Jump, Melissa Traynham is reminded of this Shakespeare quote: “And though she be but little, she is fierce.”

“She encompasses that,” Traynham says. “She’s small, but she’s mighty. She’s not afraid to get her hands dirty.”

Before starting as executive director of the Buena Vista Chamber of Commerce, Traynham was just another fan of Jump’s goat cheese. She heard about Jump’s story and how it drew people in. A friend of hers, for example, left a corporate job on the Front Range to work on the goat farm.

When Traynham left Denver for Buena Vista two years ago, she started to see for herself what Jump’s “infectious enthusiasm” was all about.

“Dawn herself is one of the most interesting parts of the farm,” Traynham says. “The care she takes and the pride she takes in her work is something really spectacular.”

When it comes to farm life, Jump’s all business.

ABOVE: The Jumpin’ Good Goat Country Store n Buena Vista where you’ll find coolers of cheese options along with an array of items such as soap, salami, jelly, honey, greeting cards and crocheted hats.

She’s home here, though, a place she says combines her love for goats and cheese-making. It’s a place with a beautiful view of the mountains and a place where she can practice a sustainable food model.

Jump learned cheese-making from the crew at Haystack Mountain Creamery in Longmont. Her on-site operation has employees making cheese every day and milking goats twice per day. Some goats come from nearby farms to be milked.

RIGHT: Dawn Jump smiles as she is surrounded by her goats. “I’ve always been a rural girl,” she says. “I’m not at home in the city.”

Before the pandemic, a majority of Jump’s business came from selling to restaurants. Then she had to improvise. She threw more energy into the little country store, which recently was expanded to make room for items from local producers. There’s an array of things like soap, salami, jelly, honey, greeting cards and crocheted hats. And there are coolers of cheese options.

Behind the counter is Danielle Gee, one of the longest- serving employees on the farm. She’ll tell visitors how to pack cheese with ice if they’ve got a long drive. She’s had more visitors lately.

“The store has gotten us through the last year,” Gee says. “We probably wouldn’t be here without it.”

It’s another example of Jump being wise on the business side. As much as you could romanticize the little goat farm, she doesn’t rely on the cute factor. She’s kept a steady focus on making sure the product is good.

“At the end of the day, we have to sell the cheese or we can’t be here,” she says. “That means we have to keep the quality.”

Here, Jump also does things that aren’t necessary. During the height of the pandemic, she hosted free goat cuddles for anyone who could use some farm animal love.

Another part of Jump’s mission is educating people about the principles of sustainable agriculture. Jump does that via weekly farm tours.

“People have a hunger for knowing where their food comes from,” she says. “It’s not behind this magic door.”

By visitors seeing the faces, both of the goats and the humans, that make Jumpin’ Good Goat Dairy run, the owner hopes to leave a strong impression — one that leads to people making different decisions at the grocery store.

“I want people to know that if we don’t support our small farm producers now, they’re going to go away,” Jump says.

Traynham says she always loads up on Jumpin’ Good’s goat cheese at the grocery store. And sometimes she sees Jump there doing her own shopping.

“It brings that farm-to-table concept down to a micro level,” she says.

She wants others to experience that, too. That’s why when visitors stop by the Chamber of Commerce for suggestions, Traynham says Jumpin’ Good is a “must-do.”

Visitors won’t just get to see the goats and where the cheese is made. They’ll get to talk to the woman behind it all.

“The first time I met Dawn, I thought, ‘She’s someone I want to keep talking to,’’’ Traynham says. “She has this high energy that makes you feel like you can’t help but be excited with her.”

Jump’s excitement isn’t a sign of an easy life.

This is hard work, she says, that “takes a lot of grit.”

Her days are full, especially now that she runs a vacation rental on the property, which she calls a “farmstay.” When her phone rings, as it often does, it lets out a series of “maah” sounds recorded on the farm by Jump’s daughter. She can’t escape the sound of goats, and she doesn’t want to.

“Goats made my dream job possible,” she says. “I just love them.”

Every day, people get to see how Jump has made a living with her love of goats. And, yes, her brothers have taken note.

“Now,” Jump says with a laugh, “I make them beg for cheese.”