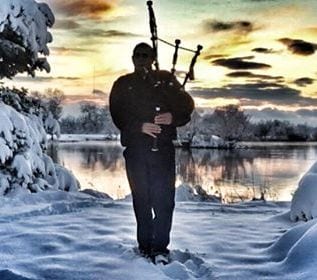 Front Range Fire Rescue Chief Mike West and other members of the Colorado Emerald Society Pipes and Drums band were looking for a way to help their communities get through the coronavirus pandemic. They settled on performing a nightly outdoor concert, playing down the sun.

“We are part of the first responders,” West said. “It has become a way at the end of the day for us to say, ‘Hey, we made it one more day. We are still on the front lines. We are still fighting the good fight and there is still hope.’”

It’s a centuries-old tradition held in times of crisis, and a new movement among Colorado’s firefighters. Each night a group of about 75 members from the society go out to play their bagpipes in their own neighborhoods. The time of sunset is posted daily on their Facebook page and pipers try to start together in their separate corners of the state.

“The idea was to encourage unity, strength and hope with our movement,” West said. “I have been telling people that after a stressful day, I go down into the basement to practice and release stress by playing my bagpipes. You can’t think about problems when you are playing.”

The group thought it might be a way to help people feel the same way if they went outside and played for the public each night at sunset.

#sunsetsolidarity continues through rain, sleet, or snow. Tomorrow night we will be hoping for warmer weather and we will be playing at 7:41 pm. Have an awesome day, friends!

At first, West took to Facebook to warn his neighbors that he would be playing “because bagpipes are loud,” he joked. But he found that people came out to listen to him from their porches and sidewalks.

“I had a guy who cried for 20 minutes straight as I played,” he said. “It has been a moving experience for all of us … People are super appreciative. If they come out to watch they all maintain good social distance.”

The playing ends with hooting and hollering, cheering and whistling. Members say they will not stop the nightly ritual until the pandemic is under control and the curve is flattened.

Each sunset they may play a different tune –perhaps a little longer or a little shorter. But each night, as the sun sets, they play on.

Technical issues prevented live streaming… please enjoy this recorded video from tonight. All of us played “Going Home” in honor of those lost, especially our friends, family, and fellow first responders. #sunsetsolidarity