Colorado finally got full-day kindergarten, but parents are wary in a COVID era 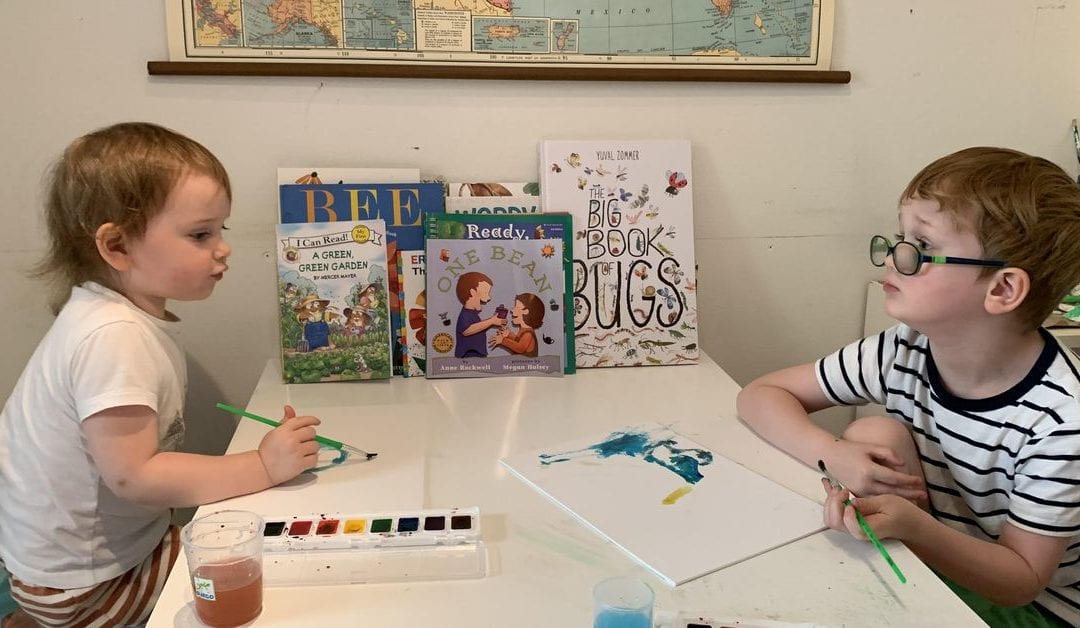 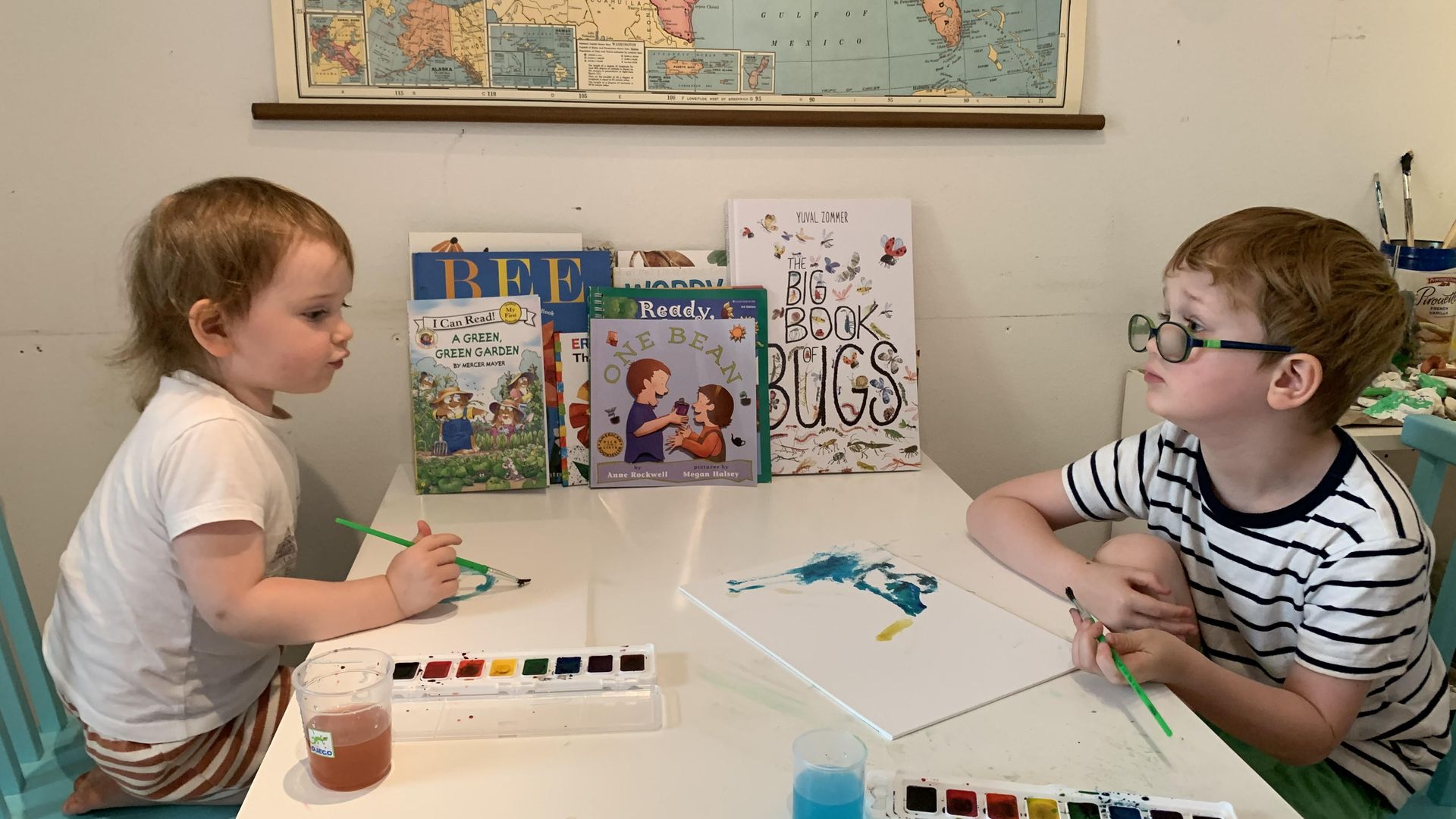 Five-year-old Logan Walker, right, and his 3-year-old sister, Sojourner, paint together in a makeshift classroom at their Boulder home.  | Courtesy of Lindsey Walker

Mattye Crowley spent most of her summer agonizing over whether to enroll her 5-year-old son in kindergarten at their neighborhood school this fall.

The West Denver single mother, who also has an 8-year-old son in the third grade, said she feared for her children’s safety as the number of COVID cases in Colorado rose over the summer, and she was also concerned that the virtual learning most Denver schools required for at least the start of the school year would not be a good fit.

She reluctantly signed her children up for Fairview Elementary, but two weeks into the virtual learning program, she withdrew them. The school expected the children to be online from 8:30 a.m. to 2:30 p.m., far more screen time than she thought was healthy, and she was stressed out trying to keep both her children on task.

“So, I’m sitting between them, getting on both of their cases, like ‘concentrate,’ yet I’m falling asleep listening to the material — and I’m the mom,” she said.

Despite her concerns about virtual education, Crowley also fears that Denver Public Schools has pushed to resume in-person schooling too soon. She has chosen to home-school both of her children full time for the indefinite future. She considers it a safer, more flexible, and impactful option, but juggling teaching her children while managing her small educational curriculum startup has been tough.

Crowley is among thousands of Colorado parents who have grappled with the same heart-wrenching dilemma and ultimately decided not to enroll their children in kindergarten — which is optional in the state — for the 2020-21 school year. Although official enrollment numbers have not yet been finalized, many districts are reporting a decline in kindergarten enrollment believed to be due to the pandemic.

Even as the district moved to bring kindergarten students back to school early, Denver Public Schools reported that it had roughly 6,267 students enrolled in kindergarten, down 9% from what it had predicted before the pandemic. Of that number, 30% of those students are enrolled in the all-virtual option.

“We had about 600 fewer kindergartners than we were forecasting back in January,” said Chuck Carpenter, the executive director of finance for the district.

In Aurora Public Schools, which also started the school year remotely and is now transitioning students back to the classroom, kindergarten enrollment is down by about 14% or 420 students from projections; with about 2,523 kindergarteners enrolled. Jeffco Public Schools, the state’s second-largest district, which brought students into the classroom after Labor Day, is down almost 14% or 817 students from projections.

The declines are similar in districts that offered in-person options from the start. Douglas County Schools reported an 11% drop, nearly 500 fewer students, with about 3,915 enrollees. The Cherry Creek School District, which offered full-time in-person instruction since August, has reported a 10% drop, with nearly 3,300 kindergarteners enrolled.

Those numbers contrast with the 24% increase in kindergarten enrollment Colorado school districts experienced last fall, the first year that the state reimbursed districts for full-day kindergarten. Expanding kindergarten was a key campaign promise of Gov. Jared Polis that fulfilled a longtime hope of advocates and educators. Attending kindergarten is linked to better outcomes throughout children’s academic careers and is seen as key to closing achievement gaps.

Colorado is hardly alone. School districts around the nation are reporting steep declines in kindergarten enrollment.

The pandemic has left many parents of school-age children scrambling to figure out schooling options. Some have kept their 5-year-olds out of a traditional school setting, but may enroll next year, which could mean more older kindergarteners in next year’s cohort.

Parents could also choose to enroll their 6-year-olds in first grade next year, possibly resulting in more underprepared first-graders. Early childhood education experts in the state have said no matter what parents decide, long-term ramifications are likely.

“It’s always the case that most teachers experience a big spread in their classroom, in terms of where kids are [academically], and I would think that’s going to be even wider,” said Mimi Engel, an associate professor and program chair for research and evaluation methodology at the University of Colorado Boulder’s School of Education.

“So, if you have a kiddo that skipped kindergarten and didn’t have much opportunity to do much academically-oriented activities as the year before — and it could be for a zillion reasons — then that teacher’s going to have a very different experience with them then they do with a child who was in full-day kindergarten, full-time, or who was in some pod where they had a full-time private teacher.”

On the positive side, some experts have noted that lower kindergarten enrollment has created smaller in-person class sizes, something for which education advocates have long pushed.

Along with concerns about academic challenges, many advocates, educators, and parents worry about how the social and emotional development of students is being impacted. In Boulder, stay-at-home mom Lindsey Walker decided to home-school her 5-year-old son Logan. She plans to enroll him in kindergarten next fall instead.

Logan has Asperger syndrome and suffers from seizures, which she said puts him at an elevated risk should he contract COVID-19. She has an autoimmune disease and other health conditions that heighten her own risk. She and her husband felt that Logan would have struggled in an all-virtual learning program. They feared he’d lose some of the progress he’d made in a preschool program in the Boulder Valley School District before schools shut down last March.

“He’s not like cognitively behind, if anything, he’s academically a bit ahead in some areas, but to have an online or socially distanced school year, would provide no benefit for him,” she said. “He would be basically going straight into first grade without having developed that whole year of social skills, and the social skills are really the critical thing.”

The decision to keep him home was extra tough for her family. After living abroad for many years, they’d relocated to Boulder from the Netherlands last year due to limited special education options available in Amsterdam schools.

Walker now spends several hours on weekdays in a makeshift classroom at their home, her husband’s former study, running through a rigorous home-schooling curriculum that she has developed, while also caring for her 3-year-old daughter. She worries about how the lack of exposure to other children may set Logan back socially and emotionally, in skills especially critical for children on the autism spectrum.

“It’s so important that kids have a strong foundation, because [in] kindergarten, you do learn letters and numbers and reading and writing, but if you’re not emotionally well, if you don’t have the skills and the strategies you need to be a good friend, it becomes so much harder to do that learning,” she said.

Cassandra Johnson, president of the Denver chapter of the National Black Child Development Institute, an advocacy organization, said she fears that educational disparities that were significant even before the pandemic may widen further, especially for children of color, those with learning disabilities, and those living in poverty.

Johnson said the safety precautions being mandated in schools, such as social distancing and limited physical contact, may even impact learning for students who return to the classroom, particularly critical language development.

Language doesn’t sink in just through listening, she said. “It’s learned by the child watching the mouth movements, the way the tongue forms the T, when you’re saying a word. They’re seeing the tongue hit the roof of the mouth, the way the lips are formed, all the way down to how the eyes move and the nose.”

Wearing masks prevents students from seeing that, she said.

Johnson said her organization has been bracing for an impending early childhood education crisis. Her group was among 45 advocacy organizations in the state that sent a letter last month urging Polis to reopen schools ahead of businesses and better prioritize children’s educational needs.

“We want the governor and state agencies to make sure that any pandemic response centers the needs of children and families, especially those who have the most barriers to opportunity already,” said Mares of the Colorado Children’s Campaign, among those signing the letter.

She said that overcoming the educational obstacles the pandemic continues to impose will require state education leaders making a “longstanding commitment to investing in kindergarten and early childhood supports because we know how important it is to get that strong start for kids.”

Another consequence advocates note is that decreases in kindergarten enrollment could ultimately prompt budgetary cutbacks that may affect staffing.

“The state does fund us based on the number of kids that are enrolled, so the decline in kindergarten will impact DPS. Having fewer kindergartners from last year will impact our funding,” Carpenter said.

He said leaders at individual schools will adjust staffing. “We’ve tried to follow our crisis priorities in responding to this as best we can,” he said.

Mares, on the other hand, is holding out hope that Colorado leaders will be proactive in circumventing any long-term effects.

“It would be really nice to make sure that we are as responsive as possible to kids — meeting them where they are.”

Chandra Thomas Whitfield is an award-winning multimedia journalist whose work has appeared in The New York Times, The Washington Post, The Boston Globe, NBC News, and The Huffington Post. She is a 2019-2020 fellow with the Leonard C. Goodman Institute for Investigative Reporting and host and producer of In The Gap, a recently launched for In These Times Magazine about how discrimination in pay adversely impacts the lives — and livelihoods — of Black women in the American workforce.