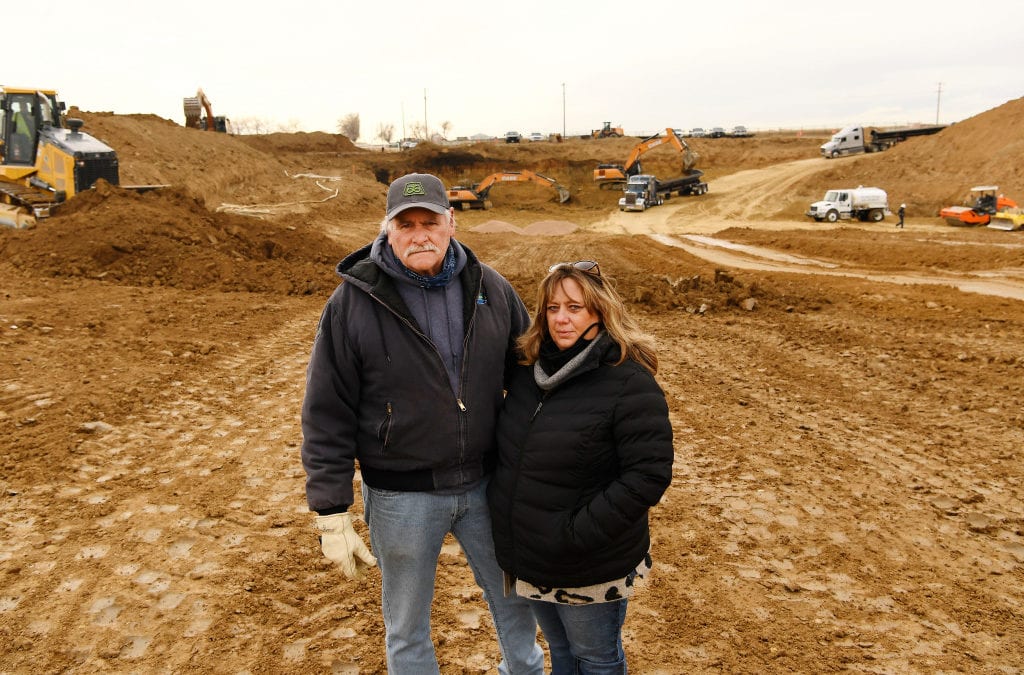 For years, Julie and Mark Nygren have hosted school children on field trips to their farm near Johnstown. But recent visitors to their property saw what looked more like a strip mine than a farm.

On a recent day, bulldozers, backhoes and large trucks drove around big piles of dirt, down and out of a pit and through the spot where the Nygrens’ house once stood. Speaking over the roar of the engines, the couple talked about the upending of their lives, starting in 2016 with the dying off of trees in front of their home, worsening health problems and the discovery in April 2019 of green liquid in a ditch 130 feet from their house.

The liquid was connected to a widespread underground leak from a natural gas pipeline running below the western Weld County farm.

The Nygrens are suing the pipeline’s owner and a construction company that dug in the area to put in a culvert.

And the Nygrens, their lawyers and others are calling for more oversight of the thousands of miles of oil and gas pipelines under Colorado homes, schools, roads and farm land.

“I call it the subterranean toxic spaghetti,” said Lance Astrella, one of the lawyers representing the Nygrens in their lawsuit against DCP Midstream Operating Co. and Mountain Constructors Inc.

The “spaghetti,” or network of oil and gas pipelines, includes flowlines, gathering lines, longer transmission lines that run within the state and transmission lines that cross state lines. Flowlines, typically shorter and smaller in diameter, connect a well to surrounding equipment and are regulated by the Colorado Oil and Gas Conservation Commission.

Gathering lines, the kind that spilled on the Nygrens’ farm, generally carry oil or natural gas to a collection point. Along with the larger transmission lines, they are regulated by the Colorado Public Utilities Commission and the federal government in a manner that sometimes seems as much of a labyrinth as the physical structures.

A deadly house explosion in Firestone in 2017 led to tougher rules for flowlines. It was an impetus for Senate Bill 181, passed in 2019 to overhaul how oil and gas is regulated in Colorado.

Some of the first rules that were revised govern flowlines, which run from a wellhead. Federal investigators said gas leaking from a severed flowline likely blew up the Firestone house, killing Mark Martinez and Joey Irwin. Erin Martinez, Mark’s wife and Joey’s sister, was badly injured.

“I am here with you today to share my story and support change that will hopefully keep this from ever happening again,” Erin Martinez said in a 2019 news conference announcing SB 181.

The Nygrens said they don’t want to see what has happened to them happen to others. They knew there were wells and pipelines around them and feel they coexisted well with an industry they see as important to Colorado. But after the loss of their house and the ongoing upheaval of their farm, Julie Nygren said she worries about what potential havoc could be lurking below ground.

A subsequent, unrelated and smaller spill involving a line owned by a different company further shook the couple.

“It seemed like in our situation, to start with, it wasn’t anybody’s jurisdiction,” Mark added.

Road signs are tossed aside as Julie and Mark Nygren’s farm undergoes demolition at the intersection of County Road 13 and 42 in Johnstown on Thursday, Jan. 7, 2021. They say their property was ruined by a pipeline leak and their health affected. Their house has been demolished and soil 20 feet deep over three acres of land had to be removed.

In 2019, the Colorado Oil and Gas Conservation Commission approved rules that require better mapping of the estimated 17,300 miles of lines, mandated more testing to ensure the lines are sound and updated procedures to make sure unused lines are shut down properly.

The commission has mapped 11,040 miles of flowlines on and off well sites, spokeswoman Megan Castle said. The public can see the locations on the COGCC website.

In public hearings, some members of the public urged the COGCC to expand its oversight to gathering lines, which carry natural gas, oil or other liquids from the drilling site to a processing facility, refinery or a transmission line. They are regulated by the Colorado Public Utilities Commission and the federal Pipeline and Hazardous Materials Safety Administration — to an extent.

The PUC regulates about 700 miles of gathering lines it reports on to federal officials. Those lines haven’t been mapped. The PUC also oversees about 3,000 miles of longer gas lines within Colorado.

The Pipeline and Hazardous Materials Safety Administration in the U.S. Department of Transportation oversees interstate transmission pipelines and oil and hazardous liquid gathering lines in populated and environmentally sensitive areas. Roughly 4,700 miles of interstate gas transmission lines and 4,300 miles of hazardous liquid lines are under PHMSA jurisdiction in Colorado, according to state data.

“There’s been a lot of concern expressed to the COGCC because that’s really been the only opportunity for the public to talk about pipeline safety. But what the COGCC did was point to their sister agency (PUC) and say, ‘That’s not us. It’s them,’” said Matt Sura, an oil and gas attorney who represents landowners, mineral owners and local governments.

Sura said new PHMSA rules that will be phased in over the next several years will expand regulation of lines in rural areas and require testing of the pipelines’ condition.

“We knew well before Firestone that these flowlines posed a safety risk. The COGCC had as recently as two years prior received an update and an assessment stating that these flowlines posed a threat,” Sura said. “They didn’t act until they were forced to because of a terrible tragedy and the political fallout after. I’m afraid that we’re going to have to wait for something similar on the issue of gathering lines and transmission lines.”

Speakers at a meeting in September 2019 called on the COGCC to start regulating gathering lines, saying SB 181 gave the agency the authority to do so. But Castle said the law revamping oil and gas regulations didn’t expand the COGCC’s jurisdiction beyond flowlines.

Industry representatives say shipping oil and gas via pipelines is much safer than moving it by train or tanker trucks.

“Pipelines continue to be the safest and most efficient means of transporting the resources we depend on. Maintaining the integrity of these systems from pipelines to gathering lines remains a top priority for companies and regulators,” Dan Haley, president and CEO of the Colorado Oil and Gas Association, a trade group, said in an email.

Although it doesn’t regulate larger lines, the COGCC manages the cleanup of pipeline spill, like on the Nygrens’ property. The agency is also overseeing the remediation of a release from a DCP pipeline on agricultural land near Keenesburg and about 900 feet from the Wild Animal Sanctuary. Contaminated soil there has been sampled and removed.

The pipeline company didn’t respond to requests for comment about the spills.

Trucks dig where Julie and Mark Nygren’s home once stood, at the intersection of County Road 13 and 42 in Johnstown on Thursday, Jan. 7, 2021. They say their property was ruined by a pipeline leak and their health affected. Their house has been demolished and soil 20 feet deep over three acres of land had to be removed.

A lawsuit filed in June by Denver-based DCP against Mountain Constructors of Platteville says the construction company is responsible for causing the pipeline leak on the Nygrens’ land.

DCP says in its lawsuit that Mountain Constructors didn’t consult with it as required by its contract with Weld County to repair roads and replace a culvert near the Nygrens’ property and didn’t follow state law. DCP said it could have relocated the pipeline or installed a support structure to protect the line if it had been onsite.

After the pipeline failed, DCP said it discovered a crack in the line beneath the concrete culvert and a cut-off wall. The pipeline company said it has spent more than $2 million to clean up the spill, pay for property damage and compensate the landowners and expects to spend in the “mid- to high-seven figures.”

The Nygrens’ lawsuit against both companies, filed Dec. 31, accuses DCP and Mountain Constructors of failing to take the necessary steps to protect the pipeline during the construction of the culvert and maintain and inspect it afterward. The Nygrens’ home had to be demolished because dangerous liquid hydrocarbons leaking from the pipeline had pooled under the house, according to the lawsuit.

Nearly four acres of the 470-acre farm have been dug up about 20 feet deep to remove soil contaminated by benzene, known to cause cancer, and other chemicals. Reports by the COGCC say more than 30 wells have been installed to monitor the groundwater. Emergency trenches were built when the water started moving north.

The Nygrens’ lawsuit is seeking unspecified compensation for medical bills and damage to their property and business. The couple said DCP paid for a hotel when they had to be evacuated April 5, 2019, and is paying for a rental in Johnstown. Their insurance doesn’t cover the damage from the pipeline leak.

“The pollution exclusion,” said attorney Jason Wesoky, who is working with Astrella on the case.

The Nygrens keep running their farm, although part of it has had to be idled during the cleanup. It takes planning to maneuver around the heavy equipment and the trucks that haul as many as 100 loads of contaminated soil to a landfill each day. Julie said the crews have been good about working with them.

Mark and Julie Nygren walk around their farm at the intersection of County Road 13 and 42 in Johnstown on Thursday, Jan. 7, 2021. They say their property was ruined by a pipeline leak and their health affected. Their house has been demolished and soil 20 feet deep over three acres of land had to be removed.

But the couple, who lived on the property since 1984, don’t know how long the cleanup will take.

It’s not clear how long the pipeline was leaking. The Nygrens suspect it started around the time their trees began dying in 2016. That’s when Julie, 55, and Mark, 67, said they developed health problems: persistent coughing, chronic fatigue, headaches, shortness of breath, pains in their legs and feet and digestive tract issues. Both made trips to the hospital.

Even house guests were affected, the Nygrens said, including Julie’s sister-in-law who passed out and had to be taken to the hospital in 2018. She was diagnosed with hypoxia, a shortage of oxygen. Julie and Mark saw doctors and took several tests. Doctors said they both have nerve damage and likely will be on medication for the rest of their lives.

“We don’t like to take medication. We’ve always been strong, healthy, hardworking people. It’s just not anything you could ever foresee happening,” Julie said.

The house the couple updated and improved through the years and where they raised their three children had to be demolished. The Nygrens said their personal belongings were contaminated because of toxic vapors and a hazardous materials company disposed of most of them. The family photos and heirlooms they kept have to be decontaminated.

“That home was our heart and that land was our soul,” Julie said.

Wesoky said there needs to be more transparency with oil and gas pipelines, noting the lack of mapping of gathering lines.

“When you buy property in a community governed by a homeowners’ association you get 200 pages of documents and disclosures, including what paint you can use,” said Wesokey. “But there’s nothing in there that says there’s a 4-inch pipeline carrying natural gas under your house, a gathering line across the street.”

A lot of gathering lines are in easements, so you know where those are, Astrella said.

“But you don’t know how old they are or what they’re carrying or how maintained they are. I think the oil and gas commission is trying to do a pretty good job with flowlines, but that’s a small fraction of the problem,” Astrella said.