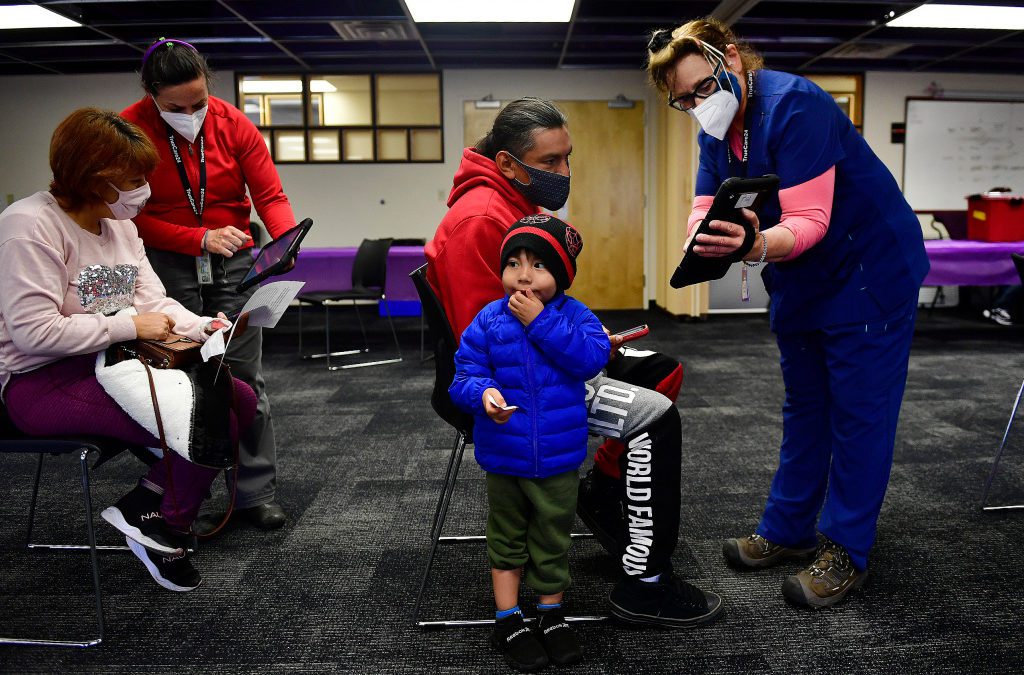 After suffering through COVID-19 in the early days of the pandemic, the last thing Alicia Solis, a Northglenn resident, wanted to do was catch it again. But trying to line up a vaccination appointment on her own proved more complicated than expected.

So she and her husband showed up on a slushy Monday morning earlier this month at a clinic her employer, Rocky Mountain Janitorial, and her union, Service Employees International Union Local 105, were co-sponsoring.

“I just wasn’t wanting to risk it,” Solis said after getting her first dose of Moderna’s COVID-19 vaccine. “They made it easy to get the shot.”

As government-sponsored voluntary mass vaccination sites deal with dwindling numbers, more employers are stepping forward to make getting a COVID-19 vaccine shot as easy as possible for their employees, balancing the desire to see them protected against the impulse to force the issue.

“It behooves us and them to have them vaccinated,” said Heather Treat, co-owner of Rocky Mountain Janitorial along with her husband Mike, who also attended the clinic.

Vaccinated employees will be more protected healthwise, making them less likely to need days off or a substitute to fill in, she said. Increasingly, more clients are requesting that cleaning crews be vaccinated, part of their own efforts to protect their employees and make them comfortable about returning to the office.

Nurse Jennifer Cockayne, left, gives Alicia Solis the first dose of the Moderna COVID-19 vaccination at an SEIU 105 vaccination clinic on May 3, 2021 in Denver.

Somewhere between 20% to 30% of the company’s 500 workers, a majority of whom are Latinas, have secured shots on their own, estimates Mike Treat. The goal was to have closer to 60% to 65% vaccinated after two clinics the company co-sponsored on May 3.

“For our members, there is a barrier to getting vaccinated,” said Juan Montaña, internal property service director at the SEIU Local 105.

Language is a big one, but so is navigating the health care system and accessing the technology many sites require to sign up. And even then, getting time off from work and other obligations complicates scheduling an appointment. And there is the overarching issue of trust, one reason the SEIU decided to host the Denver clinic at its union hall off Alameda Avenue.

And yet, as actively engaged as the union is when it comes to encouraging members to get vaccinated, it will not endorse any efforts to make the COVID-19 shots mandatory.

“We will always be opposed to that,” Montaña said. Likewise, Rocky Mountain Janitorial is also not requiring vaccinations.

Surveys are all over the place in terms of how hard employers will push to have their workers vaccinated. In February, a survey conducted by employment law firm Littler found that only 1% of employers were mandating vaccines and only 6% were considering making them mandatory.

A March survey from placement firm Challenger, Gray & Christmas found that 97% of companies would not require vaccinations, although 57% said they would strongly encourage workers to receive it, and nearly 40% were considering incentives like paid time off, gift cards, cash bonuses, free lunches and maskless gathering areas for the vaccinated.

In April, Arizona State University and the Rockefeller Foundation released a survey that found 40% of employers who responded in the U.S. and U.K. would require all employees have a COVID-19 vaccine, with another 32% encouraging vaccination, 16% requiring it only for certain employees. About 12% were either taking no stance or still uncertain about what policies they would implement.

And when The PNC Financial Services Group surveyed Denver-area small- and medium-sized employers earlier in the year, it found that just over half, 53%, planned to require that employees be vaccinated, while a third would take a more encouraging approach and nearly a fifth would provide incentives to vaccinate.

“There seems to be some indication that the vaccines are safe and not causing harm. That is having some influence on small-business owners’ willingness or interest in pushing their employees to be vaccinated,” said Kurt Rankin, an economist with PNC.

Naim Nassar, principal engineer at Denver-based MNA Inc., is making vaccinations a prerequisite for returning to the office at his nine-person architectural and structural engineering firm in Denver, but he won’t make them a condition of employment.

“I will definitely urge them to get vaccinated, but I will leave it up to them. I don’t think I have that much say,” he said.

For those employers who are taking a more voluntary approach, especially firms with a large number of workers, hosting vaccination events on company time and on the company dime is becoming more common. Retail giant Amazon held its first one in Colorado on April 28 at its Aurora fulfillment center.

Amazon employees line up for COVID-19 vaccinations at the Amazon distribution facility in Aurora on April 28, 2021.

“My focus within the building is to provide the opportunity and the convenience to as many people as possible to help. Right now we are strongly encouraging it, and we are encouraged by the interest we have seen,” said John Sabo, general manager of the Aurora center.

And for the front-line worker who couldn’t get their shots onsite, the company offered $80 if they obtained a shot somewhere else.

Even though it is the more complicated route to take, some employers in Colorado, primarily institutions of higher education, are mandating vaccines.

After talking to state and local public health experts, as well as tapping its own experts at the Anschutz Medical Campus, the University of Colorado system decided to require all students, faculty and staff to obtain COVID-19 vaccines, said Ken McConnellogue, vice president of communications.

“Bottom line, the safety of our community is our primary imperative. At the same time, we want to be able to offer students an on-campus academic experience,” he said.

Although federal labor laws do permit employers to require vaccinations, the Food and Drug Administration has permitted COVID-19 vaccines under an emergency use authorization — not full FDA approval. That could open the door to legal challenges. And exemptions are allowed based on strongly-held religious beliefs or a disability or health condition, something the CU system will accommodate, McConnellogue said.

Other complications with a mandatory approach come in verifying and tracking who is vaccinated and dealing with non-compliance. A CU Boulder website requests that faculty, staff and students prepare to provide a digital copy of their vaccination cards, but McConnellogue said verification details are still being ironed ahead of the Sept. 15 deadline.

The University of Colorado has also decided that it won’t “out” non-vaccinated employees, he said. That may not sit well with the vaccinated, especially if they are unwittingly sitting next to a non-vaccinated co-worker.

A Republican-sponsored bill that sought to prevent employers from making vaccines mandatory for workers or customers, one of several introduced in the country, was quickly blocked in the House Health and Insurance Committee on a party-line vote. Among those lining up against the bill were business groups interested in preserving flexibility when it came to vaccine policy.

Although it sounds counter-intuitive, making vaccinations mandatory can backfire by increasing resistance, something that occurred in the U.S. with the anthrax vaccine, which the military required personnel to take, said William Lang, medical director of the WorldClinic, a telehealth provider, and former director of the White House medical unit under the Bush Sr. and Clinton administrations.

Educate workers on the risks they and others face, inform them on the efficacy of the vaccine, and leave the choice up to them, he advised. That should result in more people obtaining shots than taking a hardline, which risks harming morale and triggering employee defections.

“One reason often asserted is that people feel that if someone is having to go the step of forcing them to take it, there must be something questionable about it, because if it is so good, then it should be obvious that it’s good and no one should need to be coerced,” he said.

Within health law circles, there is an active discussion on how workers who refuse to get their shots should be treated, given how effective the vaccines are so far at protecting against COVID-19 and lowering infection rates.

“If someone has a medical reason not to get vaccinated or if they have a deeply held religious belief that prevents vaccination, then the employer likely would need to consider providing a reasonable accommodation for that situation,” Lang said.

But what does that accommodation involve, and how long should it last? And when it comes to dealing with those who don’t obtain a vaccine, some polls indicate that co-workers may take a much harder stance than management ever would.

Glassdoor, in a survey of 1,149 workers, found that 70% agreed that all workers should be required to obtain a COVID-19 vaccine before being allowed to return to the office, and nearly a quarter would consider quitting if they were forced to come back before that happened.

And yet, the same survey found that nearly a quarter of respondents saying they will not take the shot.

Whether that position softens remains to be seen. But that standoff, in a nutshell, describes the challenge some employers won’t be able to escape as they bring people back to the workplace.