Colorado Elk Stuck in Mine Shaft Gets Rescued 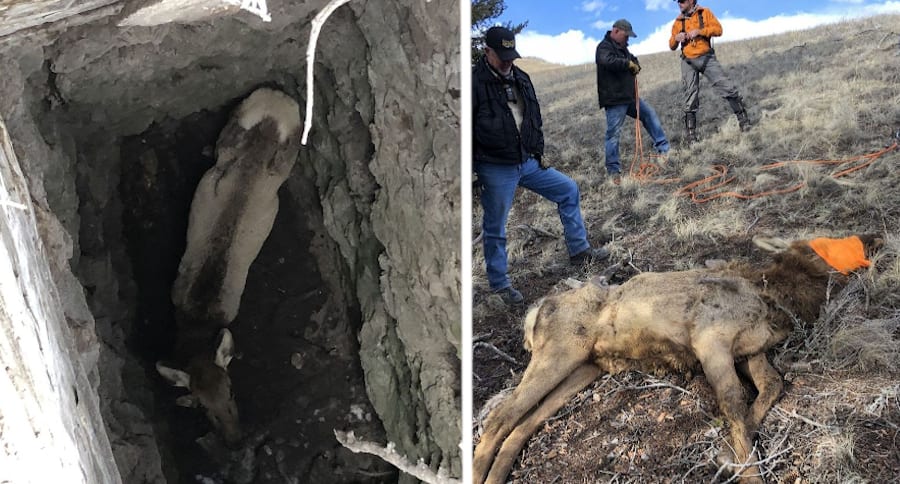 It was this cow elk’s lucky day when a hiker stumbled across her.

A hiker’s spur-of-the-moment decision to check out an old mine shaft led to a cow elk’s fortunate rescue earlier this month.

According to a press release from Colorado Parks and Wildlife, Creede resident Chere Waters was hiking with a friend in the upper Rio Grande Valley near Bachelor Loop Road on April 18 when she decided to check out an old mine shaft she had noticed years earlier.

“I don’t know what it was, but something was drawing me to go up there,” Waters said in the press release.

About a mile from her vehicle, she was able to spot the mine shaft opening again, hidden in a grove of trees. The press release says she first pitched a rock in before crawling on the ground to the edge to get a better look inside. Her friend held her ankles for safety while she did this.

“So, I looked in and see this animal in there,” Waters said. “I was so surprised I couldn’t believe it.”

Waters’ friend used a cell phone to contact authorities about the trapped animal. It took about an hour for Mineral County Sheriff’s officers and CPW Wildlife Officers Brent Woodward and Jeremey Gallegos to arrive. They quickly realized the initial report had gotten the species of animal wrong.

“When I got the call, I was told that a deer was stuck in a hole,” Woodward said in the press release. “But they thought the shaft was only about 10 feet deep. When I got there, I could see it was an elk and it was probably 30 feet down.”

There was only one way to get the animal out of the 10-foot long by three-feet wide hole and that was by knocking it out with a tranquilizer. The responding officers were fortunate this mine shaft was close enough to a trail to bring a vehicle in. After placing straps around the 250-pound cow, they were able to use a truck winch to pull her out of the hole. Because the hole is hard to see even when standing up close, it appears she simply failed to notice it before it was too late. The animal’s tracks went right to the edge.

“It’s dangerous, it’s in the shadows, and until you’re 20 feet away, you don’t see it,” Mineral County Emergency Search and Rescue Manager Terry Wetherill said in the release.

Wetherill was the one who was lowered into the hole to place the straps on the animal once it was tranquilized. He also believed the animal had been in the hole for two or three days.

Even though the cow was beaten up and probably shaken from the experience, the officers eventually administered a drug to reverse the tranquilizer. After that, it stood up and eventually walked away, albeit on legs that were a little shaky. You can see her full recovery in the video below.

The CPW press release notes that the mine shaft is most likely a by-product of a silver rush that happened in the area back in 1889. Unfortunately, there are lots of similar mine shafts in the area posing a danger to humans and animals alike.

Wetherill said he will be looking into finding the owner of the property where the elk was found and will see about filling or covering the dangerous opening up so something like this won’t happen again.

NEXT: HOW BIG IS A MOOSE, REALLY?

The post Colorado Elk Stuck in Mine Shaft Gets Rescued appeared first on Wide Open Spaces.