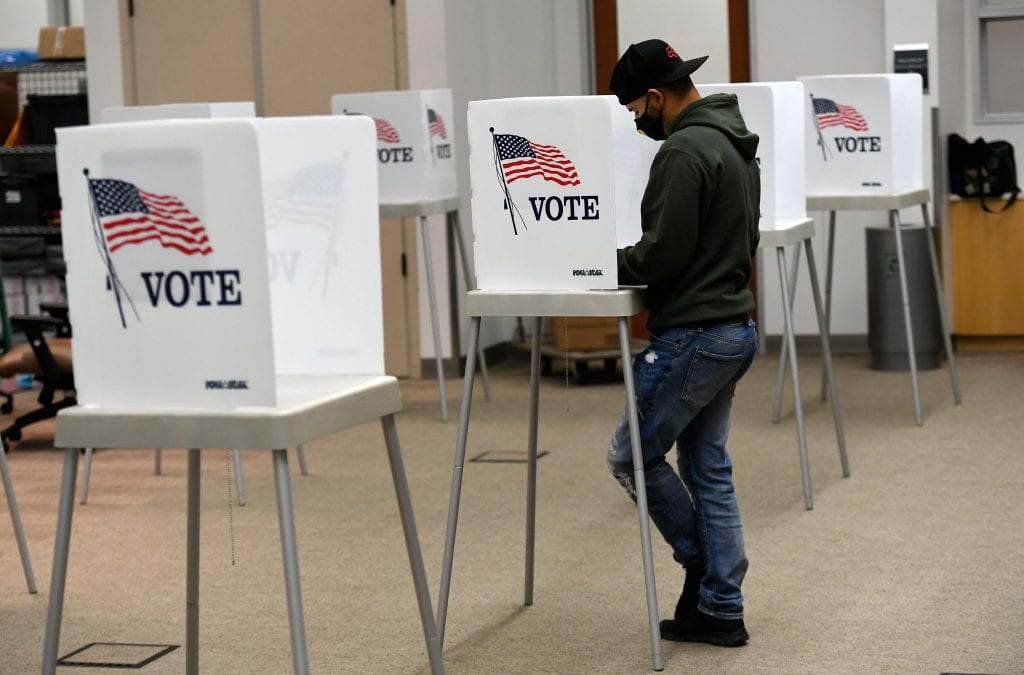 But while Colorado voters leaned left to create a paid family and medical leave program, they stayed true to their fiscal conservatism in other decisions. They approved a small income tax cut and were favoring, by a small margin, a measure that aims to put more fiscal handcuffs on officials by requiring voter approval for large new fees, as is already required for tax increases under the Taxpayer’s Bill of Rights.

On the whole, voters went big for the Democrats — even more so than in 2016 — and built on gains they made in the 2018 election, when suburban voters flipped several lower-profile county offices long held by Republicans.

Still, the national presidential outcome was unclear late in the evening. And those margins for Biden and Hickenlooper could tighten a bit as more ballots are counted in Colorado, especially since Republicans were more likely to vote on Election Day.

The election brought high voter turnout — higher than any election in Colorado going back at least two decades, if not even longer. About 3.1 million ballots were returned through 5 p.m. Tuesday, two hours before polls closed, according to the Colorado secretary of state’s office. That amounts to nearly 75% of registered voters, and it will rise as final ballots are processed in the coming days. The Associated Press’s projections factored in an expected turnout that would amount to well over 80% of registered voters in Colorado.

Voters approved a tax on tobacco and vaping products and, in a big win for state and local officials, a repeal of the Gallagher Amendment. That 1982 measure complicates property taxes and government budgets by limiting the proportion of taxes that can be assessed on residential properties in relation to commercial properties. Voters also rejected a late-term abortion ban by a large margin. A referendum on whether to join the national popular vote interstate compact, was too close to call late Tuesday but was leaning toward passing.

The closest statewide ballot measure was Proposition 114, which would require the reintroduction of gray wolves in western Colorado. It was leading slightly with 50.1% support as of 11:30 p.m.

Democrats were poised to take control of the University of Colorado’s Board of Regents from Republicans. And they made further inroads in at least two suburban Denver counties.

In Jefferson County, Republican Commissioner Libby Szabo trailed Democratic challenger Tracy Kraft-Tharp, a term-limited state representative, by a large margin. In Arapahoe County, at least one commissioner seat was flipped from Republican to Democrat, as challenger Carrie Warren-Gully defeated incumbent Kathleen Conti. Another flip was possible in a second race in which Democrat Idris Keith was leading Commissioner Jeff Baker by a tighter margin.

In the open 18th Judicial District district attorney’s race, another blue flip was possible, though much more tentative. Democrat Amy Padden was narrowly leading Republican John Kellner, 50.1% to 49.9%, with 83% of expected results in. The winner will succeed Republican George Brauchler in the office, which includes Douglas and Arapahoe counties.

Voters across the metro area came out Tuesday under partially cloudy skies and mild temperatures to drop off their ballots and cast their votes in person, following heavy returns of mail ballots in the previous few weeks.

Riley Higgins and Ryan Jett walked their dog as they dropped off their ballots in Sunnyside on Tuesday morning. They voted for Biden, they said, due to a belief that that the former vice president, along with a Democratic Congress, will make better decisions to curb the novel coronavirus pandemic.

They also voted yes on allowing pit bulls in Denver “because if you train them, they’re safe,” Jett said.

“I may not love Trump, but I love his policies,” she said. As a born-again believer, Marksberry said abortion was important to her as she described her vote for Proposition 115, the late-term abortion ban that failed.

“The Democratic Party wants to take God out of their platform,” she said.