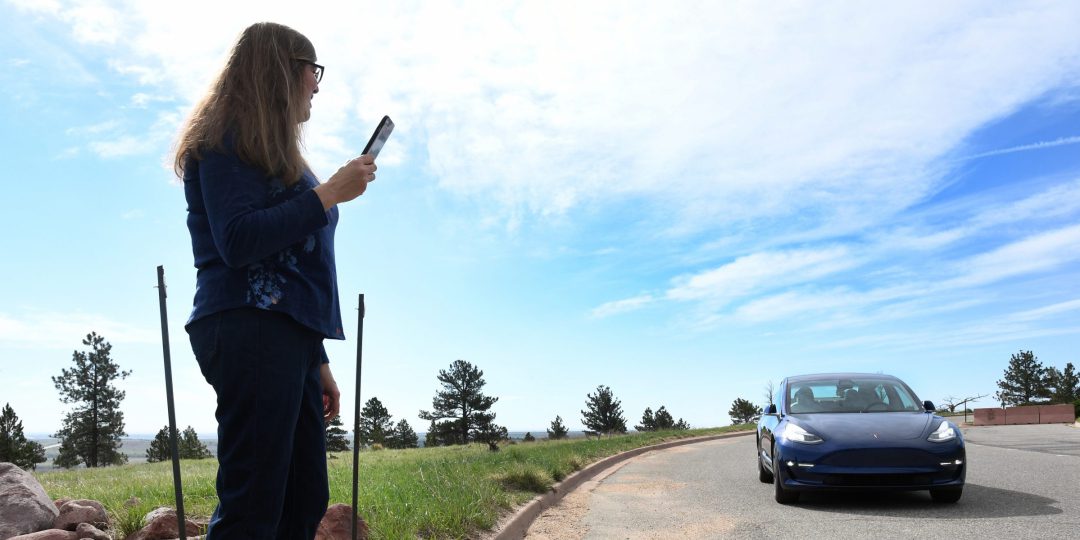 One seldom-explained job of an electric-vehicle coach is to assure people they’re not seeing ghosts.

Julia Moravcsik likes to take the EV-curious to the parking lot at National Center for Atmospheric Research, on Table Mesa above Boulder, and demonstrate her car’s “Smart summon” mode. With an all-electric Tesla, the driver can stand at the curb and hit a button on the key fob, and the parked car — with no one at the wheel — backs itself out and comes to the waiting driver.

Not all of the other drivers are impressed or titillated by the electric ghost ship docking itself at the curb. In fact, some get so irate when the ghost Tesla passes them — slowly — in the parking lot that their all-too-real profanity persuades Moravcsik to keep quiet and stop promoting EVs for a moment.

So the EV coach simply waits for her next chance to explain EVs to uninformed drivers. “Summon mode,” not available on all EVs, mind you, is just one of the things Moravcsik loves to talk about.

“I’ve never had a reason to use it, but it’s still fun to see the car just sort of moving around towards you,” Moravcsik said. “Some of the features are just funny, some of them are cool and some of them are useful. But it’s sort of like the car never gets old.”

Colorado’s Energy Office also has awarded a $550,000 contract to Edelman public relations for an “EV Education and Awareness Campaign,” all aimed at boosting the state’s chances to get 940,000 electric vehicles on the road by 2030. Gov. Jared Polis’ Greenhouse Gas Pollution Reduction Roadmap says that number is key to overall emissions cuts needed within 10 years.

Colorado was on pace to sell about 15,000 electric and plug-in hybrid vehicles in 2021, according to first-quarter registration results from the auto dealers.

“It’s all about acceleration,” said Bonnie Trowbridge, executive director of Denver Metro Clean Cities and Drive Electric Colorado. “If we let the market take care of it, people will start to understand the benefits and so forth pretty quickly. But we’re really trying to move that needle from being a 10-year process to being a five-year process, so that we get the air-quality benefits and the grid benefits to happen in the shorter term.”

Transportation is such a key part of stopping climate change, and adopting EVs is such a huge part of reforming transportation, and consumer emotion is such a large part of EV adoption, that of course a government marketing push is necessary, said Britta Gross, managing director of mobility for Boulder’s Rocky Mountain Institute, an energy and climate analysis nonprofit.

“It is very, very clear to anyone who’s worked in the industry for a long time that it’s got to be an all-hands-on-deck strategy,” said Gross, who previously worked for GM and other automakers.

Marketers, coaches, nonprofit analysts and others all mention three key areas for creating awareness about EVs and educating consumers on the current reality:

Meanwhile, the state is working with utility companies and the private sector to add thousands of higher-speed charging stations along Colorado interstates and at places along any major roadway or traffic area where errands and commuting get done.

And the “coaches,” websites and dealers need to emphasize how much consumers’ annual operating costs will drop when they’re not paying $3 a gallon for gas, changing the oil every six months, and handling thousand-dollar repairs of combustion engines.

Moravcsik and others like to emphasize the drivability of EVs — and not just the sportier Teslas. Even the smallest EV sedans and hatchbacks on the market have far-faster and more-responsive acceleration than a comparable gas engine. Electric cars have no lag when you step on the accelerator, making highway entrances a sport instead of a nightmare.

Moravcsik tells people that she is not usually the first to try new technology, but that EVs for her were not a risk: “My philosophy is to be a kind of early adopter, but not really early. This was very unusual for me, I signed up sight unseen for the Model 3 before it was even out. I did it based on two things: First of all, the environment, which I’m very concerned about, and secondly, safety.”

Drive Electric Colorado has been quietly testing its website and setting up education networks such as coaches, whom they put in touch with consumers seeking more answers from current EV owners. The publicly funded websites won’t be running “Super Bowl ads,” as Gross puts it, but they will pay for some advertising and will work with dealers.

More important is the network of word-of-mouth, Trowbridge said. Organizers are tapping into a network of EV enthusiast clubs meeting in various parts of the state. Representatives of the clubs testified, for example, at a Colorado Parks and Wildlife public hearing on whether to allow Rivian to install fast chargers at every state park. (They are.)

“There are a lot of them, believe it or not,” Trowbridge said of the clubs. “They’re truly the evangelists. They really just want people to know about EVs and, in most cases, have been driving them \for a while. So we tap into those groups.”

Sometimes, the coaches say, getting a potential EV buyer over the edge is as simple as downloading an app. Google Maps, which is on nearly everyone’s cellphone, instantly pops up the nearest grid of public chargers when you type “electric charger” into the search bar. Trowbridge likes the free app PlugShare for its ease of use, as well as the fact that it provides consumer ratings of the workability of the particular charger and provides details about the comfort of the surroundings.

When all else fails in the coaching sessions, Moravcsik can either demonstrate her “ghost” mode or mention the other periodic bonuses that make her laugh. Tesla likes to provide new horn sounds when it sends out new computer instructions.

Her car, she said, “has little dings and stuff like that, so it doesn’t look as pristine as when I first got it, but it always seems new, because it’s always updating like a computer.”