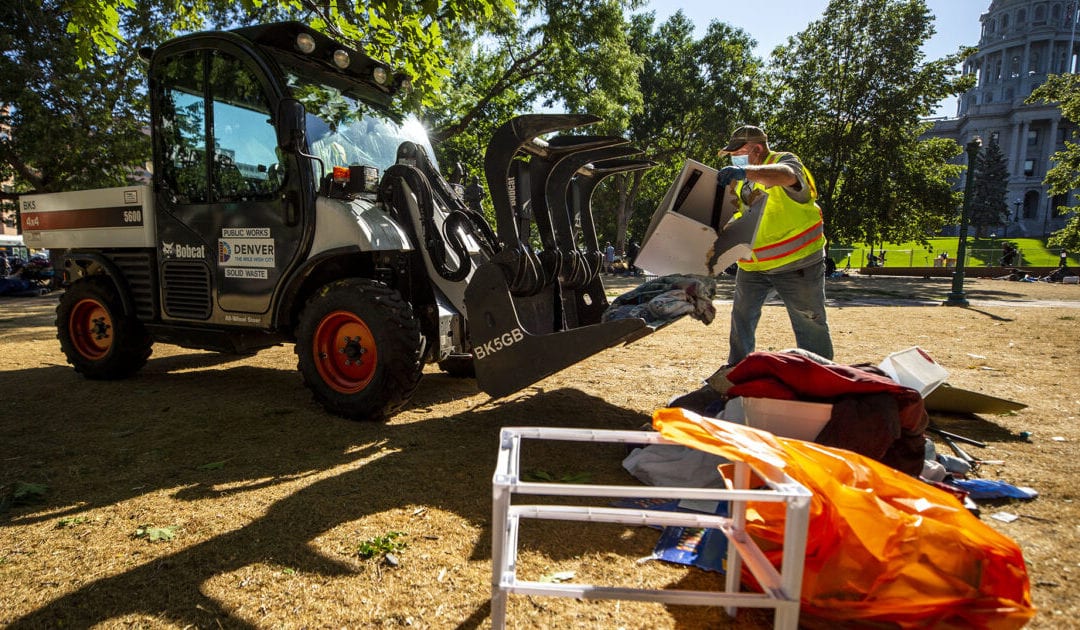 City workers and officers from the Colorado State Patrol and the Denver Police Department, some wearing helmets and wielding less-than-lethal weapons, forced people camping at Lincoln Memorial Park off the state-owned property in the name of public health Wednesday morning.

Authorities monitored the situation near the Capitol as city workers piled tents, blankets and other belongings and trash into trucks.

Cody Griess said he was awakened at about 6 a.m. and told, “Everybody needs to pack their sh*t and get out.” Griess said it was so sudden that he wasn’t sure where he would go.

Bob McDonald, executive director of Denver’s public health department, said outreach workers had been in the camp the last few days telling people the cleanup and closure were imminent. But he acknowledged that no one had given a specific date. He said he decided to clear the camp this morning.

“We need to address the situation,” McDonald said.

Last week the Denver Department of Safety, saying it was a matter of “expanding resources,” authorized state officers to enforce city laws in areas around the State Capitol and Governor’s Mansion where tents had multiplied in recent weeks. Training that troopers had to undergo before being able enforce city laws was completed Tuesday.

McDonald said the camp has created health and safety concerns. Signs posted by the health department Wednesday morning said the operation was necessary because of human waste, pests and other issues.

McDonald said there were “dozens and dozens” of people camping in the park, more than when his department stepped in to clean up and kill rats in January. Officials closed the park, also known as Liberty Park, for a number of weeks over the winter. McDonald said Wednesday that signs of a rodent infestation had again been detected. He could not say how long the park would be closed this time.

In addition to state officers, city police, city park rangers and other health department officials were at the site Wednesday morning. Protesters were at the campsite as well, accusing the police of taking people’s belongings. At one point, five officers forcefully detained a protester.

Denver school board member Tay Anderson said he was injured by police when he visited the site to urge that people be given more time to gather their property. Anderson said he and others gathered near an opening in fencing erected around the park on Wednesday to try to stop crews from preventing people from collecting belongings. Video taken at the scene appears to show Denver police officers shoving Anderson before he fell. Speaking from a hospital afterward, Anderson said doctors diagnosed him with a concussion.

During an evening news conference held online, Denver Public Safety Executive Director Murphy Robinson apologized to Anderson. Robinson said it was unclear whether a police officer shoved Anderson and that that was under investigation. Robinson said protesters, advocates and some “agitators” interrupted a largely peaceful operation. He said Anderson was part of the large group of people who tried to block entrances once the park was fenced “who were not obeying the lawful order of police” for people to move away.

Robinson said two arrests were made on Wednesday. Denver police spokesperson Doug Schepman said in an email a man and a woman were arrested for obstructing government operations.

Murphy added during the news conference that an encampment nearby at Morey Middle School would be cleared soon, but he did not specify when. A spokeswoman for the public safety department said officials had not yet decided whether the Morey encampment would be targeted under the city’s ban on urban camping or because of health concerns.

At the park on Wednesday by mid day, many of the tents were gone, either taken away by campers or loaded into the city’s trucks.

McDonald said that people were being offered storage for their belongings and transportation to shelters. Buses were provided Tuesday and Wednesday to take people from the park to shelters at the National Western Complex and the Denver Coliseum,  according to Derek Woodbury, a spokesman for the city’s housing department. Woodbury said no one accepted a ride to a shelter Tuesday and only one person had done so as of noon Wednesday.

People pushed carts piled high with belongings — including houseplants,  chairs, grills, coolers, a giant teddy bear — away from the park on Wednesday. Some headed east toward the Capitol and beyond. At mid-morning, a few people sat on the Capitol’s lawn surrounded by their belongings and gazing at the emptying park.  Bare ground or brown grass was visible where tents had stood.

Luna Anderson said she’d been hearing about an imminent cleanup. She arrived at the camp Wednesday morning from the Coliseum shelter, where she’s been staying, to take a friend who is camping at the Lincoln Park to breakfast.

“We were six blocks away when we were told they were basically ransacking the park,” Anderson said.

The Coliseum and National Western shelters were set up in April to ensure that people experiencing homelessness could shelter in place from the coronavirus. Next month, 300 men from the National Western shelter will be moved to the nearby Coliseum, where the shelter for women and transgender individuals will be closing. The women and transgender individuals now at the Coliseum and hundreds of men for whom there is not room at the Coliseum will go to hotel rooms, another shelter and, perhaps, permanent housing.

Service providers are concerned that Denver lacks shelter at a time when homelessness appears to be increasing and could worsen if the faltering economy leads to mass evictions. Public health experts also have questioned whether breaking up encampments during a pandemic could make it harder to support people experiencing homelessness and harder to control the spread of disease.

Wednesday, the Colorado Coalition for the Homeless released results of COVID-19 tests of people who had been camping at the park and nearby Morey Middle School. Of the 212 people experiencing homelessness who were tested July 7, 14 and 22, only seven tested positive.

“Moving people around increases harm and exposure to them,” Cathy Alderman, vice president of communications and public policy for the Colorado Coalition for the Homeless, said in an email.

At the park, Anderson also questioned the displacement.

“I don’t understand how they expect an extra 600, 700 people to fit into the shelter space they have,” Anderson said. “It’s like opening the doors to a psych ward and telling everyone to run.”

Anderson, 32, said that mental health and financial challenges have meant she has lived on the streets on and off since she was 16.

Stanley Patterson pushed a cart laden with a tarp and other camping supplies across the park Wednesday. He said he was not sure where he would go, but that it would not be to a shelter, where he would have to be separated from his partner.

Patterson said he has been unable to afford housing since coming to Denver two years ago in search of construction work.