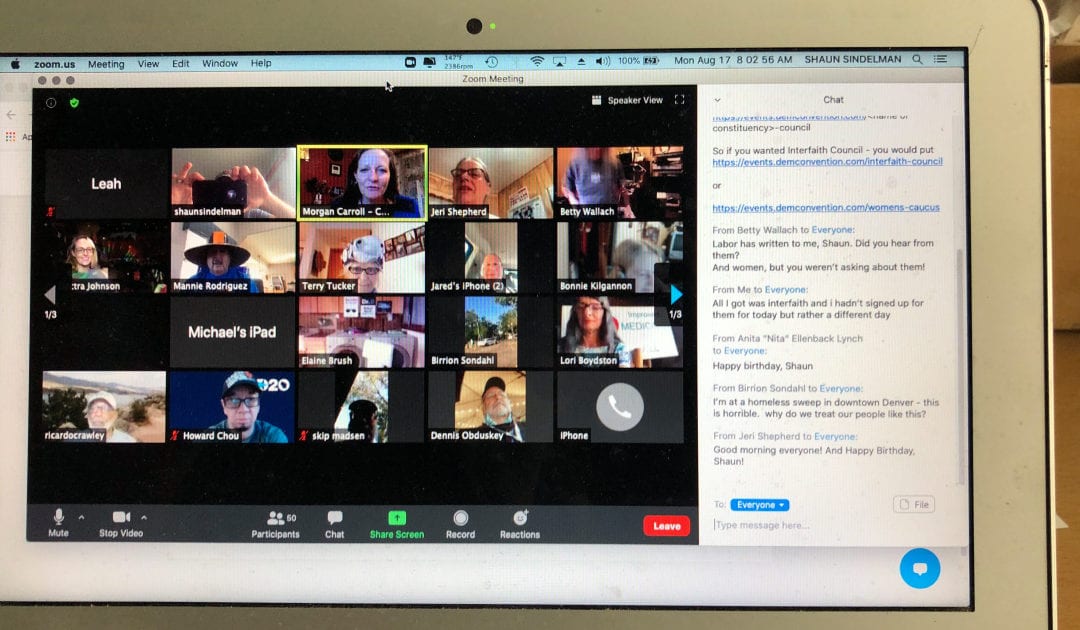 Colorado formally cast its votes for the Democratic candidate for president at the virtual national convention Tuesday, putting its support behind former Vice President Joe Biden.

The Demoratic Party nominee lost the state’s first-ever Super Tuesday primary to Vermont Sen. Bernie Sanders but picked up delegates from his former rivals. Not all were willing to back Biden, as many of Sanders’ delegates remained loyal. The state’s final announced tally: 42 delegates for Biden, 36 for Sanders.

Colorado’s delegate count came in a roll call of the states — a montage of pre-recorded videos from across the nation. Howard Chou, the state party’s vice chairman, appeared in the prime time segment, standing at Red Rocks with his family to highlight challenges facing working parents during the coronavirus pandemic.

The virtual convention is a product of the still-raging COVID-19 crisis and forced the state’s delegation to watch the four-day festivities from homes, apartments and backyards in Colorado.

Chou acknowledged the format led to somewhat of a drop-off in excitement but he hoped the party would highlight what he sees as the failings of the current administration to address the situation that forced the party to move its convention online.

“As Americans, we’ve always been able to rally around adversity, and this particular moment in time clearly defines what we needed to do to prepare and prevent something like this from happening,” Chou said.

Many of the delegates are participating for the first time — attending Zoom meetings, delegate get-togethers and virtual watch parties — and don’t mind the format. “I’ve found that it’s been very exciting, although it’s also pretty sad because it’s not the usual convention experience,” said Cecelia Espenoza, who is a delegate for U.S. Sen. Elizabeth Warren of Massachusetts.

How Colorado’s delegates are attending the convention

Much like they would at an in-person convention, the Colorado delegation starts each morning with a breakfast-hour meeting to hear from prominent Democratic politicians and talk over the day’s schedule, but it’s mixed with talk about technological glitches at virtual events. Monday’s meeting featured Minnesota Sen. Amy Klobuchar, another former presidential candidate. Later in the day, delegates can attend ice breakers with fellow Democrats from across the country, which serves as an attempt to fill-in for the loss of the in-person networking that typically takes place.

“I keep telling my colleagues, particularly those who have never attended a convention, they will remember this one,” said Polly Baca, 79, a Colorado delegate who is attending her 15th convention. She attended the 1964 convention as a youth supporter of President Lyndon Johnson. “There will be other ones they can attend in the future, but they will be talking about this one for decades to come.”

She added: “We are just as busy as ever. It’s like we are there, but we don’t have to dress up.”

Many delegates said they were making the most of the flexibility allotted by the virtual format. Espenoza planned on hosting a socially distanced watch party on the first night of the convention — with the marquee events playing on a projector screen in her backyard.

Biden delegate Betty Wallach, a former teacher who lives in Aspen, said she plans out each day of the convention and enjoys the ability to grab food and water and take bathroom breaks on her own schedule. On Monday, she said she went to a meet-and-greet with Western delegates and attended the labor council, women’s caucus and municipal officials meetings.

She plans to watch the major keynotes with her family in the Aspen home where they have hosted Kamala Harris. “Democrats are sane,” Wallach said. “We knew all along we were not going to Milwaukee because we would prefer not to die.”

But not everyone is packing their day as much as Wallach. Some delegates are continuing to work their day jobs while keeping an eye on the convention.

Sanders delegate Tracy Wesley said she has been “tuning in here and there” while continuing to work her day job at a software engineering company in Mesa County. “It’s really not too participatory for delegates this year,” Wesley said.

In addition to Chou, the chair and founder of the Asian American Pacific Islander Initiative of Colorado Democrats, the only other Colorado resident to get national exposure is health care advocate Laura Packard. She’s featured in a discussion with Biden. “I’m honored to do this,” Packard said in an interview. “And it’s very important for Colorado to pay attention to the healthcare records of everybody on our ballot.”

Can the Democratic Party unify over Zoom?

The strong support for Sanders in the state’s delegate count reflects that Colorado is one of a handful of states where the self-described democratic socialist won the primary. And some of his supporters remain strident. “For me personally, we’re not celebrating a Joe Biden nomination,” said Anthony Maro, a Sanders delegate from Colorado Springs.

On the convention’s opening night, Sanders urged support for Biden and encouraged Democrats to vote. But a recent battle on the party’s platform reinvigorated the divide.

Sanders delegates — including some from Colorado — pushed for the platform to endorse “Medicare for All,” a single-payer government-run health care plan. Many delegates felt Medicare for All should have been explicitly endorsed by the party because polls show about 80% of Democrats say they support the policy.

“I think there’s a lot of people on the progressive side that feel like we have not been listened to enough,” Wesley said.

Some Sanders delegates from Colorado also believe the virtual format has been leveraged by the party establishment to shut them out. And Chou acknowledged the virtual format made it hard for delegates to get their priorities into the platform.  “It’s a challenge for everybody, and I understand the frustration, so I’m totally with my Bernie delegates with how upset they are,” he said.

First-time delegate Shaun Sindelman, who supports Sanders, said he’s still deciding if he will vote for Biden. “I subscribe to the idea that every voter’s vote is important and should be earned and shouldn’t just be about a letter next to your name,” he said.

Even with the disconnect, many Democrats are hopeful that the party will be driven together by a disdain for a common foe: President Trump. U.S. Rep. Ed Perlmutter, an Arvada Democrat who has regularly attended the party’s morning meetings, expressed optimism.

“There is a pretty unified Democratic Party right now with a lot of energy,” Perlmutter said in an interview. “A lot of motivation, much of it driven by the chaos that Donald Trump creates as president of the United States.”