Colorado Crossroads steeped in not volleyball, but breastfeeding-ban controversy 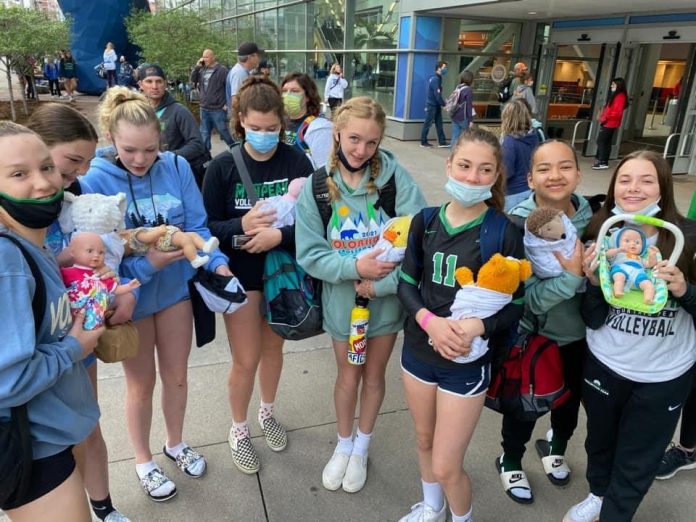 Normally, any media attention garnered by the Colorado Crossroads national qualifier would focus on volleyball.

Instead, the girls tournament in Denver this past weekend was mired in controversy after a coach who breastfeeds was not allowed to bring her baby into the Colorado Convention Center.

And she, evidently, was not the only one.

Dixie Loveless, the club director for Mountain Peak Volleyball in Logan, Utah, who coaches a 14s team, was told she could not bring her 4-month old daughter inside.

The tournament, while a competition for teenage girls, was not allowing spectators 16 and under. Loveless brought her daughter into the tournament on Friday and coached with her nearby, but was denied on Saturday.

Colorado Crossroads, on its website, said (sic): “(all guest must be 16 years of age and older)” and that rule — prompted by COVID precautions — was, apparently, strictly enforced.

“I have been advised by a PR firm and an attorney not to make any statements right now. Perhaps by the end of the week.”

After Loveless and others were denied entrance with their babies, local volleyball activists, including Emily Swanson, an attorney who is also a new mom. You can see her comments, photos, and videos from the weekend on her Facebook page.

The photos accompanying this article were provided by Kelsey Burger, who told us, ” I was one of the moms who was refused entrance as a spectator.”

The controversy was also picked up by local Denver media outlets and subsequently got national coverage as well, all unfavorable to the Colorado Crossroads tournament. What’s more, the event was already being pilloried on a volleyball forum called VolleyTalk. You can read that thread here.

The tournament was, of course, a USA Volleyball national qualifier, and VolleyballMag.com’s John Tawa will have results and information in his Daily Dots this week.

Loveless’ Mountain Peak team went 7-2 and finished in a tie for 49th in the 14 American division.

This from her original Facebook post at 10:50 a.m. Saturday in a group called Volleyball Coaches and Trainers.

There were hundreds of replies, most favorable to her cause:

I am calling on this community’s help. We are a club attending Colorado Crossroads with my U14 team. When I went to enter the tournament yesterday, I was told that my 4-month-old breastfeeding baby would not be allowed in. I explained to them that I am the only way she is able to get food, and she can’t go more than 3 hours without eating, let alone 7. They told me it didn’t matter, because “COVID”, no kids under 10 are allowed in the bench. I explained she would not be on the bench ever, she would be held by one of the parents during coaching and officiating assignments. They said they still would not allow my nursing baby in. I asked if there were any other accommodations where I would be allowed to bring in a caregiver to hold her between feedings, because I can’t be in two places at once (holding her downstairs while also coaching my team) and they said no. Kay Rogness said my only option was to pump. Kay also told us that this would be the rule going forward. My baby does not take a bottle.
We ended up just walking upstairs with my baby yesterday and we weren’t stopped. My baby slept almost the entire time except the two times she nursed during the event.
Later that evening, we got a call from the USAV Arbitrator saying if we tried to bring her again, there would be “serious consequences for my team.”
Right now I am being told I must choose between caring for my nursing baby and coaching my team and allowing them to participate in the tournament.
Even more frustrating is how they clearly don’t see the example they are setting for these female athletes. Choose: family or coaching. That’s what they’re doing. They have no middle ground. They are teaching the girls that they can’t coach and be a mom. They are putting limits on us as women, and it’s bull.
We are at a loss what to do and asking for any help we can find. This is wrong and discriminatory towards women and moms.
We have contacted the state and convention center and they are telling us this is a rule from the tournament director and USAV. The tournament director and USAV Arbitrator are telling us it comes from the state somewhere in their contract, which they refuse to look at or give us names to direct us to somewhere more specific. Does anyone have any advice to help us with this situation? We don’t know where else to turn.
You can find that Facebook group here, but you will have to scroll down to find the post.

The post Colorado Crossroads steeped in not volleyball, but breastfeeding-ban controversy appeared first on Volleyballmag.com.