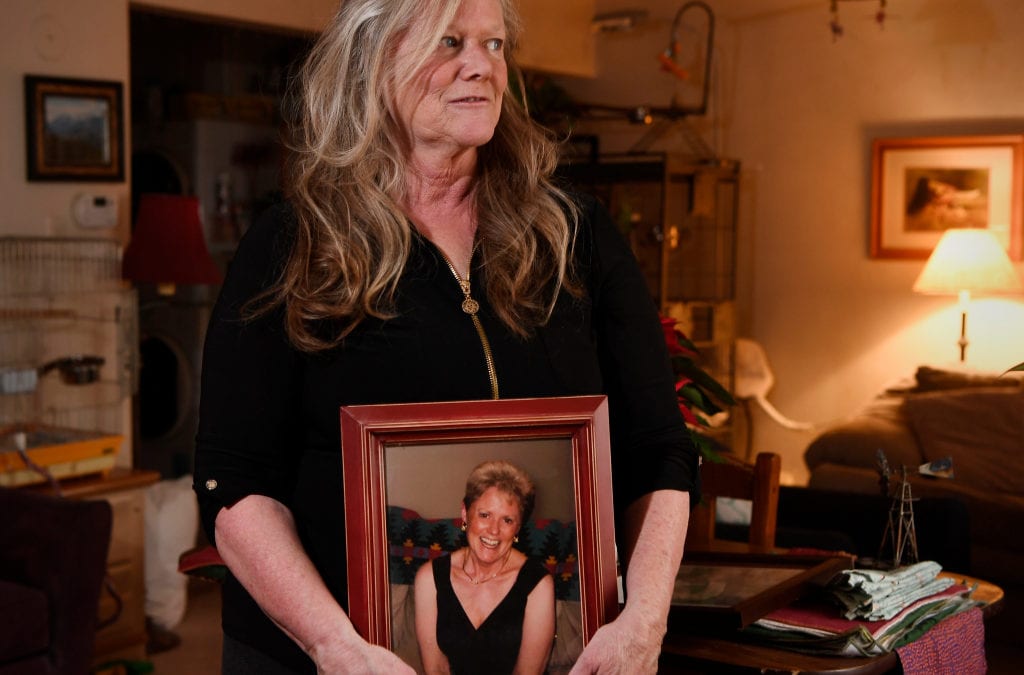 After Victoria McGrath’s son was murdered in Englewood by two 16-year-old boys who wanted to rob someone, after the teens posted photos of the killing on Facebook and were arrested, after a plea deal and a trial, and after a sentencing where one boy’s mother wept and pleaded for mercy, McGrath had to justify the cost of her dinners.

She traveled from her home in Florida to Colorado six times following the fatal shooting of her 33-year-old son, Nicholas Lewis, and she spent thousands of dollars on airfare, hotels and meals for herself and her family. She sought to make the killers pay her expenses — restitution she is entitled to under Colorado law — because she felt it was one more way to hold them responsible for her son’s death.

During the process, one defense attorney zeroed in on the cost of her meals, suggesting they were extravagant, and his client shouldn’t have to foot the bill.

“The defense insinuated I was trying to make money,” she said. “It wasn’t pleasant.”

She’s one of several crime victims pushing for changes to the way restitution is handled in Colorado and hoping to see legislation introduced this year that would make it easier for victims to file for it and help to ensure perpetrators pay what they owe.

Between 2016 and 2020, Colorado criminals were ordered to pay about $322 million in restitution, according to data provided by the Colorado Judicial Department. About 16% — $51 million — actually had been paid to victims as of Thursday.

One proposed change to the restitution process is to add a list of acceptable expenses to the law, so that victims won’t have to fight defense attorneys over basics like travel, mental health counseling or funeral costs, said Ray Harlan, chairman of Colorado Victims for Justice, the nonprofit organization leading the push for change.

Other measures would give victims more time to request restitution and require offenders to be up-to-date on payments before they’re released from parole. Sen. Rhonda Fields, D-Aurora, is interested in sponsoring the bill, her office confirmed.

The cases with the smallest debts — under $1,000 — are the most frequently paid off, according to the data. About 40% of the approximately 48,500 cases with restitution ordered between 2016 and 2020 have been paid in full, and two-thirds of those paid-in-full cases had debts less than $1,000, according to the records.

On average, the collection rate for all restitution after three years is about 14%, Lynda Lindsey, collections manager for the judicial department, said.

“What pulls us down is the small number of cases that are ordered to pay very high amounts,” she said. “Oftentimes those are the ones who go to (prison), and there is very little money to be had, especially when they are incarcerated.”

Each year, the department collects about $35 million in restitution and interest, the data shows.

There are about 120 judicial department staff members across the state who work on collecting fees, fines and restitution, Marty Galvin, director of financial services, said. The department uses variety of legal tools, from wage garnishment to liens on real property, to collect money if an offender otherwise fails to pay. Each case is unique, Galvin said, and the approaches for collection need to be flexible.

“The idea is to get somebody into compliance according to their ability to pay,” Lindsey said. “And to do that as quickly as possible. … When they’re sentenced by the court, that might not be their best day, and sometimes they are struggling with whatever their circumstances might be. So some of them take longer to come to terms with the fact that they have to pay it, or it takes them a minute to get themselves sorted out so they can.”

Melissa Bickford at her home on Thursday, Jan. 28, 2021 in Longmont. Bickford, a victim of domestic violence, has not received any restitution from her abuser and would like to see the system changed.

It’s difficult to say how Colorado’s collection practices compare to other states, because each state has a varied approach, Bill Raftery, senior analyst at the National Center for State Courts, said. A 2012 study published by the center found that Arizona reported 44% compliance with restitution payments, and Michigan saw about a 30% collection rate on its more serious crimes.

In Colorado, both the judicial branch and the Department of Corrections are responsible for collecting restitution. The Department of Corrections automatically takes a 20% cut of any revenue an inmate receives and applies it toward restitution and other debts, and later the offender’s parole officer monitors payments. Offenders don’t have to pay off their restitution to be released from probation or parole, but the judicial department continues to seek payment perpetually, whether or not the offender is under supervision.

“They can be released, but restitution is a final judgment, and it is due until it is paid,” Lindsey said.

Lisa Perry, whose sister, 64-year-old Candace Stuart, was killed on her drive home when another driver crashed into her as he fled from police in 2012, found her restitution payments stopped as soon as the driver was released from parole.

He’d been ordered to pay $1,564 to Perry to make up for lost wages, but she only received $825, she said. When the driver was in prison — he was sentenced to three years but served half that, she said — Perry received regular payments, some as low as $9.

“He’s at least going to pay me something,” Perry said. “And every time he has to send a check he is going to think that he killed someone. That was my hope. In my mind, it was some kind of punishment to make up for the minimal sentence.”

During the two years he was paroled, the driver sent along three more checks, she said. After he finished his parole in 2018, Perry never received another payment, even though she visited a half-dozen officials to ask about the missing money.

“Everybody kept passing the buck,” she said.

The bill Harlan is proposing would require offenders be up-to-date on payments or have an established payment plan before they are freed from supervision. It also suggests giving victims 180 days — instead of the current 91 days — to request restitution from the courts after an offender is convicted.

A longer window in which to file would have made a big difference for Melissa Bickford, she said, after she was assaulted and strangled by an abusive boyfriend in 2019. She suffered a brain injury in the assault, and when her attacker was finally sentenced in June, she wasn’t able to navigate the paperwork required to request restitution, in part because her injuries made it difficult to focus.

“For me to go back a year-and-a-half and try to find receipts, it was way too traumatizing,” she said. “There was no way I could do that as a victim. … Every receipt is a reminder, every piece of paper. You just don’t want to deal with it. It’s hard and retraumatizing.”

She was told she needed to get formal estimates from contractors before she could ask to recoup money for the property damage her abuser had caused, and in the 90 days after he was convicted, all she wanted to do was move on.

“At the time,” she said, “dealing with restitution was not as important as trying to be sane and happy.”