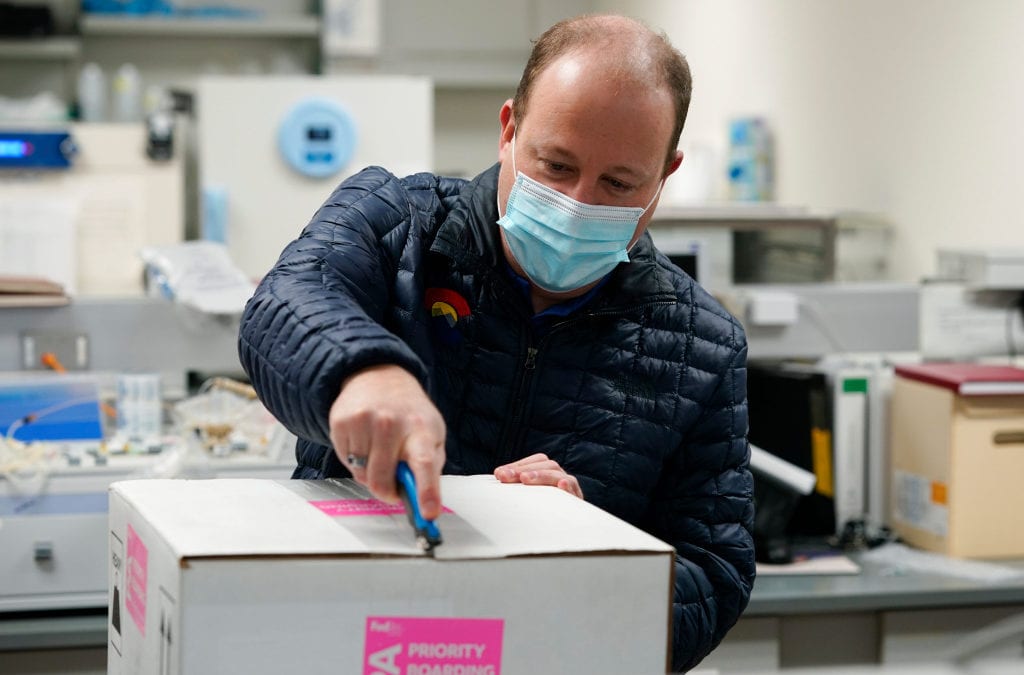 Colorado’s weekly allocation of coronavirus vaccine could increase significantly — maybe even double for a time — under the Trump administration’s plans to make more supply immediately available by no longer withholding doses to ensure people get their second shots, Gov. Jared Polis said Wednesday.

But the specifics of when and how states will receive those additional doses still are unknown, in part because the administration will transfer power to President-elect Joe Biden next week.

“Until we actually know we’re getting the vaccine, it’s hard to plan for it,” Polis said in an interview with The Denver Post, adding, “They haven’t said how they’re going to do it, but they are holding on to about three to four weeks supply.”

The prospect of more doses is welcome news to the state, which two weeks ago moved essential workers and people 70 and older up in priority, but has struggled to meet the higher demand the change created. The two groups added 1.19 million people to Phase 1, including 562,000 people 70 and older.

There are two ways Colorado could receive more vaccine supply. The federal government could double the state’s weekly allotment for several weeks, or the administration, whichever is in power when it goes in effect, could send out the vaccine supply — roughly three weeks’ worth — to the states all at once, Polis said.

States that are faster at getting the vaccine into the arms of people also could receive additional doses from the federal government. There are few details on how that would play out and whether it would be continued under the Biden administration, Polis said.

“We don’t know the terms of that, we don’t know objective criteria,” he said. “But given where we are in getting it into arms and scaling up we have done, we would welcome that and we let them know that.”

The Trump administration announced changes to vaccine distribution Wednesday, including guidance that encourages states to provide shots to people 65 and older. The governor has said Colorado will eventually adapt its rollout to match that guidance, but is waiting for more details on vaccine supply.

Biden also has said his administration will release nearly all vaccine supply to speed up the rollout. His plans are mostly in line with the outgoing administration’s, Polis said.

Polis said he was not given a heads-up from the Trump administration before Tuesday’s changes were announced, saying he found out more details after a call with officials, including Vice President Mike Pence and other governors, later that day. He also had a call with Biden officials and Western governors.

“It’s still very light on specifics,” he said. “It’s more of a general direction and an announcement that they plan on releasing those second doses but no definitive timeframe or numbers on that.”

Previously, the Trump administration has withheld a portion of the doses of COVID-19 vaccine to ensure there was enough supply for people to get their second shots. Pfizer’s vaccine requires a second dose about three weeks after the first vaccination and Moderna’s shot requires a second one about four weeks after.

One concern with this plan is that if there is a supply issue — and there have been in the past, with Colorado receiving fewer doses than expected — then it could delay the second shot for some people. It’s not known how much a delay could jeopardize the efficacy of the vaccines. Both vaccines have an effectiveness rate above 90% after both doses.

It’s also not known how long immunity lasts or whether people can still be carriers of the virus after they receive the shots, so medical and public health experts are encouraging Coloradans to continue washing their hands, wearing masks and social distancing.

The first shots only offer between 55% and 70% protection, depending on a person’s age, said Dr. Michelle Barron, senior medical director of infection prevention for UCHealth.

She said the question remains whether it’s better to have more people with 55% protection or have a smaller number of people with higher immunity after getting their second doses.

For older Coloradans, it might make more sense to give them the second dose because they are more at risk for complications from the disease COVID-19. So then, Barron said, do you reserve doses to make sure they get the booster shot?

“And I just don’t know the answer to that,” Barron said.

So far, the state Department of Public Health and Environment has not offered guidance on whether the state or individual hospital and pharmacies will withhold doses themselves to ensure some or all individuals get the second shot.

“We are currently still evaluating options for what to do if federal supplies continue to be limited as more and more people are ready to get a second dose and the federal government isn’t setting aside second doses,” the state health department said in a statement.

The federal government has “expressed confidence that (vaccine) supplies are solid and increasing in stability and quantity,” Polis said, when asked if there were concerns about people not getting their second shot.

“They need to make sure that Pfizer and Moderna are going to be able to produce that second dose and deliver it in three to four weeks,” he said. “So then they can send out all of the doses now.”

The governor and representatives with two of the health systems — UCHealth and Kaiser Permanente — tasked with administering the vaccines said that they don’t think it would be difficult for Colorado to scale up operations in the state if there is the big increase in supply.

“The key thing would be the notice,” Polis said. “With a week or more notice we’ll be able to work with our partners to successfully get that out.”

Hospitals are carrying the bulk of the responsibility of inoculating people 70 and older against COVID-19 after the state Department of Public Health and Environment divided up vaccination responsibilities last week following confusion over how groups should be prioritized in Phase 1.

“We have been building our processes and our system in anticipation of receiving more vaccine,” said Kelli Kane, vice president and chief operating officer of Kaiser Permanente, adding, “We have more capacity than vaccine supply coming in.”

“It is a constant delicate balance: the supply and demand,” she said.

Colorado also has the ability to call on people that normally wouldn’t administer vaccines, such as emergency medical technicians, to help hospitals, pharmacies and other providers. Students at the local schools for pharmacy, nursing and medicine can also help, if they are supervised, Barron said.

“We really have been waiting to see when we can get more vaccine availability so that we could scale up,” she said.