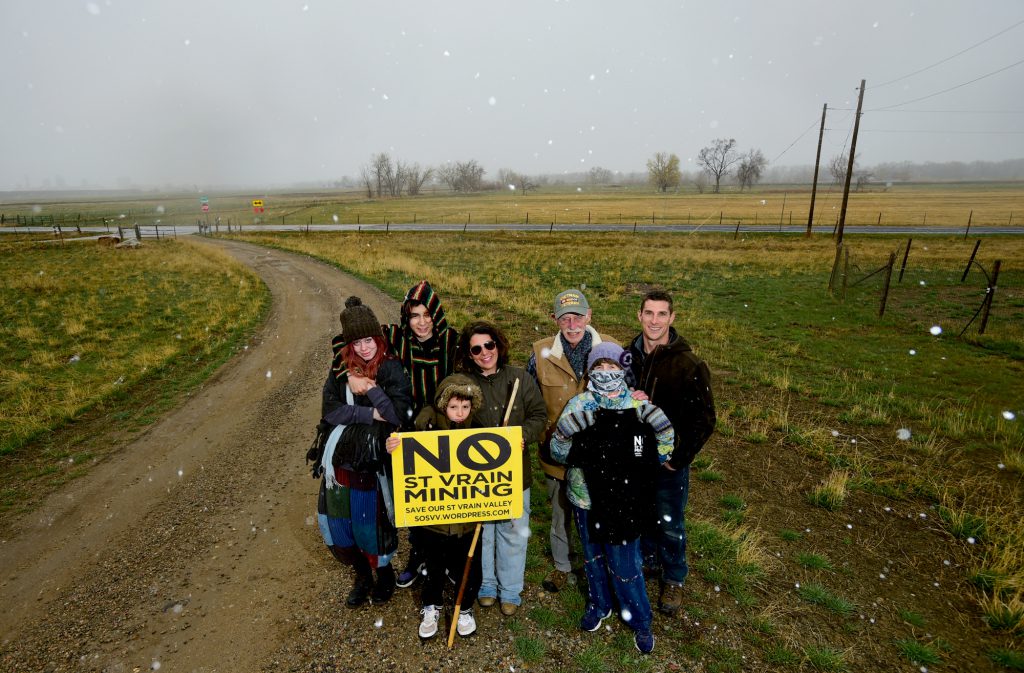 The Colorado Court of Appeals has ruled in favor of an ecological activist coalition, Save Our St. Vrain Valley, in that organization’s legal efforts to keep Martin Marietta Materials Inc. from open pit gravel mining on hundreds of acres in the Hygiene area west of Longmont under a permit Boulder County originally issued in 1998.

A three-judge Court of Appeals panel on April 1 issued a ruling that the Boulder County special-use permit for gravel mining, originally issued to a predecessor company in 1998, had expired because of a lapse in certain kinds of activities. That reversed an October 2020 Boulder District Court decision that held the permit had not lapsed.

Save Our St. Vrain Valley, the organization that’s been fighting for several years to prevent the mining on the Hygiene area property from resuming, had appealed that 2020 district court decision, and its members this week were celebrating the Court of Appeals ruling.

“That was very good news,” Amanda Dumenigo, executive director of Save Our St. Vrain Valley, said in an interview.

Even though Martin Marietta might appeal the latest ruling to the Colorado Supreme Court, Dumenigo said “we’re very pleased at the outcome” of Save Our St. Vrain Valley’s appeal of the Boulder District Court decision to the appellate court.

Even if Martin Marietta appeals, the Court of Appeals decision “carries a lot of weight,” she said. “This is a big victory.”

“While we are pleased with this important victory, the fight continues,” Cargill said. “Martin Marietta or Boulder County could seek further appeals.”

Deputy Boulder County Attorney David Hughes said in an email that Boulder County does not intend to appeal the Court of Appeals ruling on behalf of Dale Case, the director of the Community Planning and Permitting Department.

Mark Matthews, Martin Marietta’s attorney in the lawsuit, did not respond to emailed requests for comments about the latest court decision or whether the company intends to seek Supreme Court review.

At issue has been the 1998 special use permit issued when Boulder County commissioners approved a resolution for a gravel mining operation by Western Mobile Boulder Inc. on 647 acres of an 881-acre property southeast of North Foothills Highway and Colo. 66 and east of Lyons and whether that permit was still applicable, more than 20 years after initially being granted.

Boulder County’s Land Use Code provides that such permits will lapse if there has been no activity under the permit for five or more years, according to county officials.

Since 1998 there have been long periods of time when mining did not occur at the site, but Martin Marietta had argued that since it purchased the property in 2011 “it and its predecessors have undertaken many ground-moving, administrative and regulatory compliance activities over the years to comply with the thirty-five conditions imposed by the” special-use permit, according to court documents.

Save Our St. Vrain Valley filed its Boulder District Court lawsuit in August 2018 after the Boulder County Board of Adjustment upheld an April 2018 determination by Boulder County Land Use Director Dale Case that a special-use mining permit for the property had not lapsed, despite mining not having taken place on the property for some time. Three of five Boulder County Board of Adjustment members sided with Save Our St. Vrain Valley in its original appeal, but a super-majority of four votes was required to reverse the land use director’s ruling. Boulder District Court Judge Nancy Salomone ruled in October 2020 that the permit had not lapsed.

The Court of Appeals ruling, written by Justice Alex Martinez, said that after Martin Marietta purchased the rights to mine the site, the company “maintained and paid for permits and annual reports; inspections and maintenance for air, water, and weeds; construction of buildings that would be needed for mining; and reclamation work, but never performed any gravel mining. It is therefore undisputed that no ‘active mining’ has occurred since at least 2006.”

The Court of Appeals ruling said it is Save Our St. Vrain Valley’s position “that open pit gravel mining, as the sole permitted special use here, is the activity that may prevent a lapse” but that Martin Marietta “argues the meaning is much broader and encompasses not just open pit gravel mining, but the conditions imposed by the approval resolution as well.”

The Court of Appeals ruling said it was the three appellate judges’ conclusion that “the five-year lapse provision unambiguously requires activity directly related to the special use itself, or any authorized accessory uses, to prevent a lapse. We therefore reverse the judgment of the district court and remand the decision to Director Case for further consideration.”

Court of Appeals Judges Michael Berger and Ted Tow concurred with Martinez in the ruling.

Deputy County Attorney Hughes said in his email that while Case won’t appeal the Court of Appeals ruling to the Colorado Supreme Court, the Boulder County Board of Adjustment has not yet made a decision about whether to appeal it.

Hughes said if there are no further appeals by the Board of Adjustment or Martin Marietta, then the dispute over the status of the special use permit will be remanded back to Case “to make a new determination” regarding the applicability of the permit’s activities-lapse provision, in light of the Court of Appeals decision.

Dumenigo said Save Our St. Vrain Valley will continue to fight against reinstatement of the 1998 permit if the Court of Appeals ruling is appealed to the Colorado Supreme Court, or against issuing any new permit for gravel mining on the Hygiene-area property.