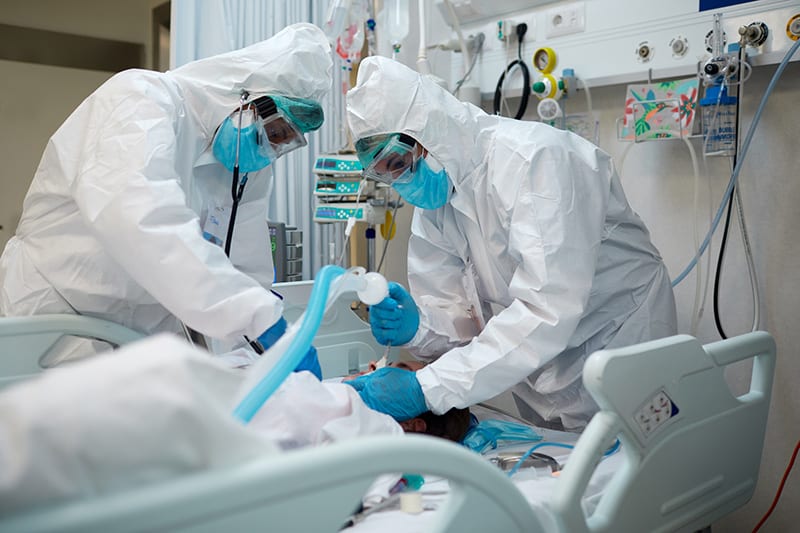 Seven Colorado counties comprising one-third of the state’s population – most prominently Denver, Adams, and Arapahoe Counties – tightened coronavirus-related restrictions in recent days. The dire numbers coming out of the Colorado COVID-19 Modeling Group’s latest scenarios are among the reasons why.

The group’s Oct. 21 report estimates the statewide coronavirus basic reproduction number to be 1.5 – meaning that, on average, a person infected with COVID-19 will spread it to 1.5 people. (That number has not changed since, the modeling group says.) That’s higher than it has been since the early days of the pandemic. The website , which estimates state-by-state coronavirus reproductive numbers, now puts Colorado among the five worst states.

As of the week of Oct. 19, the modeling group estimates that one in 292 Coloradans was infectious. That’s nearly triple the group’s estimate of a month earlier.

Before we go on: any notion that we’re headed for quick-and-easy herd immunity without help from a vaccine is still a pipe dream: the group estimates that just 8.4% of Colorado’s population has been infected since the beginning of the pandemic. Put differently, if Colorado’s population were a dozen eggs, only one of them would have had, or now have, COVID-19. We probably need 70% of the population to be immune to achieve herd immunity.

In its April 20 report, the modeling group estimated that the March-April “Stay at Home” shutdowns – wearing masks, closing schools and many businesses, staying at home, and other measures – lowered Colorado’s average statewide contact rate to about 90% below the bygone norms in which we blithely filled bars, restaurants, stadiums, theaters, gyms and so on. Since then, partial reopenings have been at least some help to the economy (and our sanity). But despite widespread mask-wearing, we’ve also increased our infectious contact rate such that it’s now “only” about 67% below normal, the modeling group estimates.

Those 23 percentage points could make a massive difference in the path of pandemic, the modeling team has found. The impact of that difference is at the heart of the group’s latest report.

The new Colorado coronavirus report models different contact rates in two main scenarios. The first scenario considers reductions in the normal contact rate of 80%, 75%, 70%, and 60%. The 80% figure is the one to watch, says Dr. Jonathan Samet, dean of the Colorado School of Public Health and the leader of the Colorado COVID-19 Modeling Group: it’s a hair better than the 78% at which he and colleagues estimate the COVID-19 reproduction number drops to 1.0. Go below 1.0 and infection rates fall.

Perhaps the most alarming scenarios are those associated with the status quo. If we in Colorado maintain our current 67% reduction in contact rate, the state would see more than 1.7 million more cases and 4,200 more deaths by year end. Seeing as the state has counted a total of 98,733 coronavirus cases and 2,236 deaths as of Oct. 27, the team’s status-quo estimates may seem implausibly high. But remember: COVID-19 spreads exponentially the moment the reproduction number rises above 1.0, and the human brain doesn’t intuitively grasp exponential growth.

Colorado coronavirus models are telling us to act now

Colorado hospitals have an estimated total of 1,800 ICU beds available for COVID-19 patients, while trying to preserve enough beds for car-accident victims, heart-attack patients, and others. If we end up with more ICU patients than ICU beds, we may well have to ration care and descend into triage decisions, forcing medical providers to have to choose who gets lifesaving care and who doesn’t.

Should we slip further, to a contact-rate reduction of 60%, the state’s numbers get even worse: 2.8 million additional cases and 8,500 more deaths by the end of the year, plus 2,500 needing ICU beds at a late-December peak. On the other hand, if we improve that contact rate to 80% below the norm, we would keep ICU numbers lower than earlier peaks and limit the damage to roughly 700,000 new cases and 1,300 additional deaths by the end of the year.

So even the “good” scenario is not a good scenario. But it’s a lot better than the others.

“The projections out into the future are very scary,” Samet said. “Worrisome is that, as time has gone on, we’ve been on this trajectory that leads to those kinds of numbers. And I think our main point is that now’s the time to act if we want to stay out of the scary-number range.”

Counties are acting, but we must also take individual responsibility, Samet says. That means social distancing, wearing masks, washing hands, and avoiding crowded or poorly ventilated spaces where you’re breathing in the aerosols linked to many superspreading events.

You’re tired of all that, Samet is quite aware. So is he. But, he says, the numbers have gotten worse because we’ve collectively gotten a bit sloppy. “Clearly, we’ve overshot in terms of what we need to do to keep the epidemic curve under control,” he said.

“I know everybody talks about ‘COVID fatigue,’” he added. “Fair enough. But the fact that it’s been going on longer than you might want is not a reason to stop taking the measures we need to take.”

As if the above numbers weren’t alarming enough, the modeling team added in a little something extra for the holidays. A second scenario starts with the base cases, but then assumes a 10% increase in contacts from Nov. 20–Jan. 3.

At our current 67% reduction in contact rate plus that holiday slackening, Colorado would see about 3.4 million additional cases and 11,800 additional deaths by year end, blowing past ICU capacity along the way. The 80%-contact-rate-reduction-plus-holiday-slippage scenario would, in contrast, yield 840,000 more cases and 1,600 further deaths by year end. That’s still about eight times more new cases and 73% more deaths than counted to date.

“We’re heading into the holidays with a rising epidemic curve,” Samet said.

The high probability that the holidays will bring about more human contact and more infection makes it all the more important to get our coronavirus numbers down in the next couple of weeks, he adds.

Confirmed and suspected COVID-19 hospitalizations peaked at more than 1,200 statewide in early April, plummeted, and then and rose to about 400 statewide during a bump in July. Now they’re up again. As of Oct. 27, 647 confirmed and suspected COVID-19 patients were hospitalized in the state. Statewide ICU capacity reached 80% on Oct. 27 – the highest since the start of the pandemic, according to state data.

“We’ve had a persistent number of patients since the first surge, and we’re consistently filling an ICU with COVID patients,” Moss said. “The concern is that, if the numbers increase, it could put additional stress on the system.”

Moss says his team at UCHealth learned from the April COVID-19 surge and has contingency plans in place should numbers spike again. But despite better treatments and higher survival rates, patients who land in ICUs often stay there for weeks, making for arduous recoveries and stressing the health care system, Moss says. Part of that stress is on ICU nurses, doctors, respiratory therapists and staff – a group whose psychological well-being has been one of Moss’s research interests.

The question that we who aren’t on the front lines must ask ourselves, then, is this: is tolerating the nuisance of taking extra care and bearing the cost of observing state and local coronavirus measures better or worse than swamping the health care system we all depend on and killing 3,000 to 4,000 of our fellow citizens in the next two-plus months? One would hope that question to be rhetorical.

“People need to realize that we’re in the middle of a pandemic. It’s not going away, and it’s not going to go away soon. This is not over, and, if anything, it’s got the potential to get worse,” Moss said.

Some of us have more work to do than others. The modeling group’s report shows that a big part of the issue with social distancing is that the young are distancing less than the old. The team estimates that those in the 20-39 age band have contact rates of 58% below normal while those 65 and older have maintained contact rates of 73% below normal. Infection rates reflect that gap: The 20-39 cohort, comprising about 30% of the population, has now accounted for about 40% of total cases; those 60 and older comprise 21% of the population and have accounted for 17% of the cases – but 88% of the deaths, state of Colorado COVID-19 show. From the perspective of race and ethnicity, Colorado’s Hispanic population continues to be hit disproportionally by the disease, with 22% of the state population accounting for 36% of cases.

“I think with the curve we’re on, we are at a point for action,” Samet said.

Among his actions, he says, will be some unwelcome inaction: staying put over the holidays.

“We’re pretty well hunkered-down, much to my wife’s dismay,” he said.