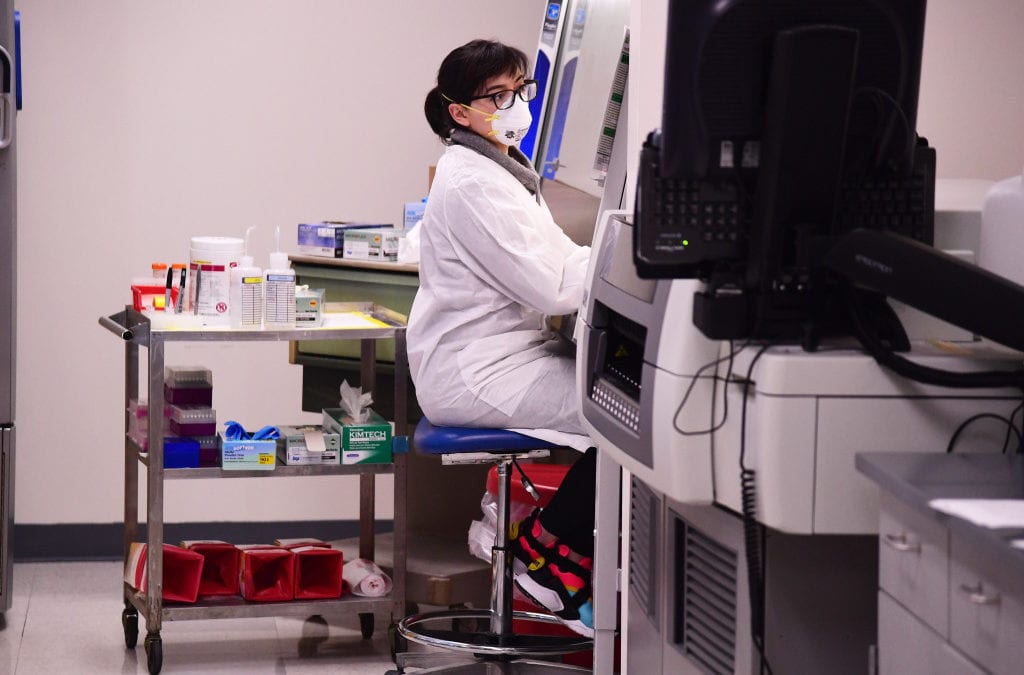 “We’re seeing extensive outbreaks in these communities,” said Rachel Herlihy, an epidemiologist with the Colorado Department of Public Health and Environment.

The number of confirmed coronavirus cases in Colorado climbed to 131 Sunday as 30 more people tested positive for the coronavirus — the largest single-day jump since state officials began testing in early March.

COVID-19 is now confirmed in 17 counties across the state, with Denver, Eagle and Arapahoe counties seeing the most infections. Denver has 25 confirmed cases, Eagle has 24 and Arapahoe has 18, according to CDPHE.

In the wake of the state’s first death from COVID-19, officials in El Paso County said this weekend that the victim, who was in her 80s and died Friday, might have unknowingly exposed scores of older people.

About a hundred people from across southern Colorado attended a two-day tournament Feb. 29 and March 1 at the Colorado Springs Bridge Center and a game night March 3.

At least one other bridge player has since tested positive for the novel coronavirus, and two others have been hospitalized with symptoms that have not been confirmed to be the virus, said John Dukellis, a club director. He said he has been fielding calls from scared players.

“This group is going to be hard hit,” Dukellis said. “This is just the beginning.”

The highly contagious respiratory disease is typically more severe in older patients or those with underlying health conditions.

The tournament saw about 90 players its first morning, 80 that afternoon and 44 players on its second day, Dukellis said. About 70 people attended the bridge center on March 3.

Some of the players came from group living situations, but most were living in private residences, said Michelle Hewitt, a spokeswoman for El Paso County Public Health. She added that the county is working with those facilities that might have been exposed. She was not able to say Sunday how many facilities may have been affected.

The virus’ spread from the woman to the second bridge player is the first confirmed case of “community spread” in El Paso County, Johnson said. The county now has four cases of COVID-19, including one confirmed Sunday.

All of the 30 new cases reported Sunday are among Colorado residents, rather than among visitors to the state, according to CDPHE.

Five cases were found in Jefferson County, four in each of Douglas, Denver and Eagle counties, three in both Arapahoe and Boulder counties, two in Weld and Gunnison counties, and one in both Garfield and El Paso counties, according to the agency. The county for one additional positive test has not been identified.

The 30 new people infected range from teenagers to those in their 60s and 70s, according to the agency. Eighteen patients are between the ages of 30 and 59.

Sunday’s test results include 25 from the state’s lab and five from private testing facilities. More than 758 people have been tested for the disease since late February.

COVID-19 has prompted drastic measures across the state in recent days as authorities try to slow its spread. A week ago, there were fewer than 12 cases in Colorado.

Gov. Jared Polis on Saturday ordered that all ski resorts close for at least one week, and a number of school districts have extended their spring breaks. Many organizations across the state have closed, canceled events or postponed activities in an attempt to mitigate the virus’ spread.

The novel coronavirus is most often transmitted when an infected person coughs or sneezes; those within 6 feet of the infected person are most at risk. Authorities have urged residents to avoid close contact with other people and Polis recommended canceling any gatherings of more than 250 people.

Common symptoms of COVID-19 include fever, cough and shortness of breath. The symptoms typically appear two to 14 days after a person’s exposure to the virus. Those who think they might be infected should contact their primary care physician.