Colorado: Cop Leaves Man Grotesquely Disfigured After Traffic Stop For Not Having His Lights On (Video) » Sons of Liberty Media 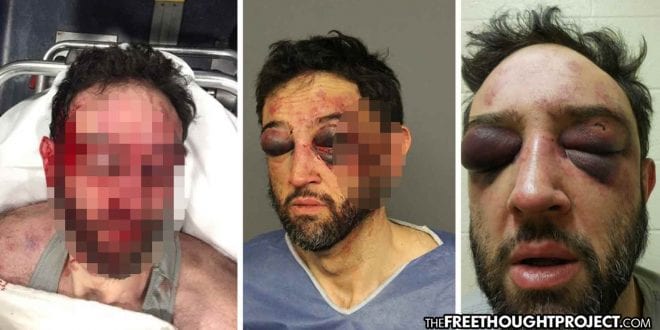 Devner, CO — In the land of the free, if a police officer sees you in your own car and you do not have your seat belt on, or all your lights working, or dark tint, they will claim the right to detain and extort you. If you refuse to be extorted, they will then claim the right to kidnap and cage you. If you resist this kidnapping over a stop for a minor traffic violation, you can and will be shot or killed. As the following case illustrates, you can and will end up savagely beaten and left disfigured for not wanting to be detained or extorted.

Justin Lecheminant, 42, was targeted for extortion by Cpl. Daniel Felkins on New Year’s night last year. Lecheminant forgot to put his lights on after picking up a bottle of booze at the store, which means Felkins claimed the right to detain and extort him.

The stop began normal enough, and Lecheminant did what he was supposed to do. He pulled over and was polite to the cop.

Felkins ask, “Have you been drinking tonight, sir?”

“I have not. I’m about to start but I have not been drinking, I promise,” Lecheminant replies, noting that he had a bottle of tequila in his car.

For some unknown reason, when Felkins told Lecheminant to hand over his keys and step out of the car, Lecheminant said, “No, I’m not going to do that,” and drove off.

It was not hard for police to find Lecheminant since he drove off while Felkins was still holding his driver’s license. When officers arrived at his house, that’s when the violence unfolded.

Officer Robert Blanc showed up on the scene first as Lecheminant was trying to get into his backyard. Blanc immediately deploys his taser, twice. Lecheminant attempts to pull the taser prongs from his chest when he is tackled to the ground by Blanc — who proceeds to beat the ever-living hell out of this father in his own backyard.

For several minutes Blanc rained down fists into Lecheminant’s face and head until the man was no longer able to see from the blood and swelling.

After Lecheminant was handcuffed, Blanc makes a telling admission as to why he just beat the hell out of a non-violent passively resisting father. He was doling out street justice after having his feelings hurt from Lecheminant fleeing the stop.

The violent cops says, “This is what happens when you elude police, dude.”

“I think that was a naked moment of truth,” said Decker, referring to Blanc’s comment on body cam.

No one here is claiming that Lecheminant made a good decision when he ran from the cops that night. However, he never did anything to merit the horrifying beatdown he received as a result of that decision.

Lecheminant did not go to jail that night. Instead, he was taken to the hospital and treated for serious injuries included a broken nose, a concussion, a punctured eardrum and four broken ribs.

Decker filed the lawsuit with attorney Tiffany Drahota, who described the internal police investigation as a “haphazard sham investigation with no fact finding.”

Blanc — who is seen on video savagely beating a non-violent man for driving away from a stop over traffic lights, to the point of hospitalization — never received so much as a slap on the wrist for his senseless excessive force.

What’s more, Lecheminant was so savagely beaten after the stop that his own son couldn’t recognize him and needed therapy to after seeing his disfigured father.

“He (Lecheminant) has a disabled son, that when he came home and his disabled son saw him, they had to actually get a therapist involved because the son was so disturbed by the sight of his father,” Drahota said.