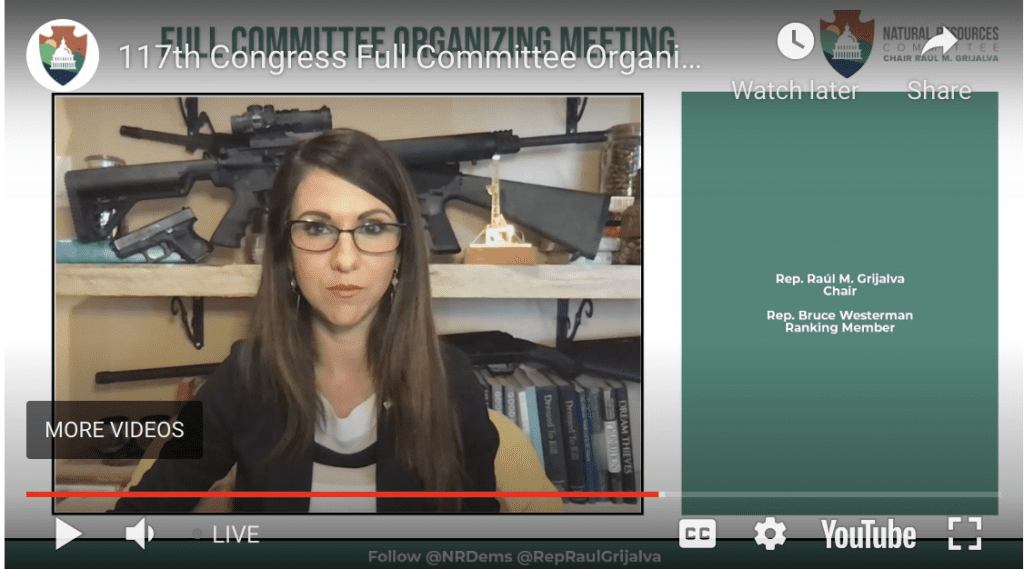 Rep. Lauren Boebert is seen in this screenshot during a virtual House Natural Resources Committee meeting on Feb. 18, 2021, with an arrangement of guns behind her. (Image: Colorado Newsline)

WASHINGTON—A U.S. House of Representatives committee meeting devolved into taunts and lectures on Thursday when Republicans, including gun-loving U.S. Rep. Lauren Boebert, objected to a rule banning firearms from the hearing room.

A meeting to organize the Natural Resources Committee and vote on its rules, generally a staid and dry procedural affair, went off the rails when the Colorado Republican slammed Democrats for what she claimed is an unconstitutional rule.

Boebert made her comments at the virtual hearing while seated in front of a bookcase stacked with at least four guns and two copies of a book titled “Dressed to Kill.”

If the Natural Resources Committee can limit her 2nd Amendment rights to carry a gun, Boebert asked, what other enumerated rights can it trample on? Can she bring a Bible or a cross, or can someone else wear a hijab during a committee hearing? Will members of Congress be unreasonably searched, or have property seized at the committee door, she wondered?

The issue of whether lawmakers should be able to carry guns on Capitol Hill has been a sensitive topic in the wake of the violent Jan. 6 attack on the Capitol by an armed mob of supporters of former President Donald Trump.

Though civilians are banned from carrying guns on the Capitol grounds, members of Congress are allowed to carry concealed firearms, provided they don’t bring them onto the House or Senate floors.

Democrats have complained, however, that even that rule has only loosely been followed — a hunch that seemed to have been confirmed last month when Speaker Nancy Pelosi ordered a magnetometer set up at the House floor entrance. Several Republicans defied the extra security check, which has led to by the Capitol Police,

With that situation as the backdrop, U.S. Rep. Jared Huffman, (D-Calif.), a Natural Resources Committee member who has to do away with the exception, said it is perfectly reasonable for the committee to enact stricter rules about guns — and threw a little shade Boebert’s way in the process.

“Here’s the reality: If someone wants to have a shrine to their gun fetish as their Zoom background, they can do that, but this is our hearing room,” he said. “At some point we will get past the COVID epidemic and we’ll all start showing up in person and our safety and our ability to conduct business civilly without feeling threatened is a relevant consideration, unfortunately.”

“I think it’s necessary — not only appropriate, but necessary — that we lay down these ground rules that whatever your fetishes or feelings are about guns, you’re not going to bring them into our committee room,” he continued. “You don’t need them there for your own safety. Many of us feel like it threatens our safety and that’s just not going to be allowed.”

Boebert, who has said she , had some practical concerns for Committee Chairman Raul Grijalva, (D-Ariz.), about the implementation of such a ban. If she has to give over her firearm when entering the committee hearing room, will there be a safe place to lock up and store it in the meantime?

“How do you plan to enforce this Mr. Chair? If there’s no enforcement measures here, why have the rule?” she asked. “Will there be metal detectors installed outside the committee hearing doors? What is the procedure for delaying a vote as members get screened? Who is going to pay for these new metal detectors and increase security, Mr. Chairman? Will you pay for this or will the taxpayers cover these expenses?”

The gun rights activist, who owns a Colorado cafe where waiters openly carry firearms, added that if she is forced to surrender her handgun, she should be provided with a security detail at the chairman’s personal expense.

Rep. Garret Graves, (R-La.), meanwhile, asked whether other potentially deadly weapons would also be banned from the hearing room (before jokingly suggesting that he thinks Boebert could probably squeeze one more handgun onto her shelf just over her right shoulder – “I’ll work on that,” she replied.)

Others had less practical concerns. Rep. Don Young, (R-Alaska), for instance, asked whether he should have to register his hands as a deadly weapon.

“I happened to serve during Korea and I was well trained in how to kill somebody with my hands,” Young said. “So Mr. Huffman, just keep that in mind: It’s not weapons I’m talking about. I’m just suggesting respectfully, you know, for them to have weapons [banned], maybe we all have to come in with our hands tied together so we can’t attack one another.”

Same goes for his elbows, he reminded the committee later.

“I was trained to do what I was supposed to do. I’m pretty good with the end of my elbows, so just keep that in mind,” he said.

Rep. Louie Gohmert, (R-Texas), chimed in to say since this issue hasn’t been a problem in the committee in the past, it shouldn’t need to be codified. He suggested Democrats are pursuing these kinds of rules for political reasons, perhaps even ordered from on high.

And he suggested the level of enforcement has already gotten entirely too strict around the House floor anyway.

“For the first time since we’d had the metal detectors I was told now there’s another rule: You’ve got to be wanded coming back from the restroom, which is ridiculous,” he said. “There’s not even tanks on our toilets where you could hide a gun, like what happened in ‘The Godfather.’”

Unfortunately for Republicans, their pleas fell on deaf ears. Outnumbered and in the minority on the committee, Rep. Bruce Westerman, (R-Ark.), the ranking Republican, offered an amendment to overturn the rule, but it was defeated.

Daniel Newshauser helps cover Washington for the States Newsroom network, of which NC Policy Watch is a member.