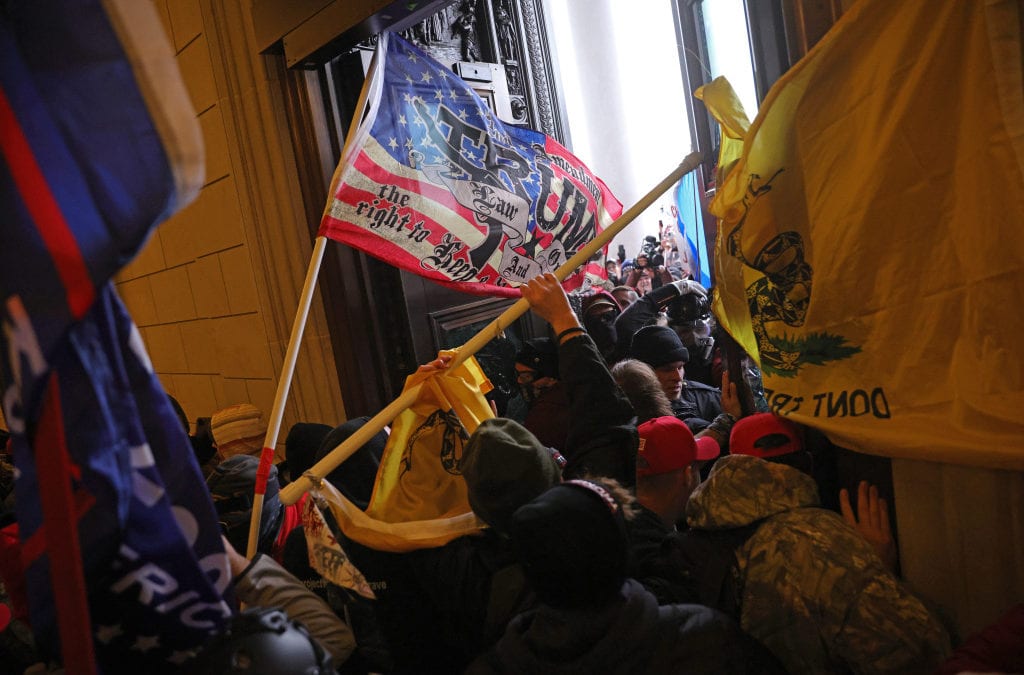 Following are reactions of Colorado’s congressional members, as well as other politicians, to the violence that has broken out in Washington, D.C. The story will be continuously updated.

1776 is the foundation of our country. Today I signed my name to a document to defend that foundation and our freedom.

The violence we saw today is inexcusable. Pray for America. pic.twitter.com/Y4ELkxJHGr

Thank you to everyone that has been checking in. My staff and I are safe and in an undisclosed location. I support peaceful protests and the rule of law, and denounce all acts of violence. I am grateful to the Capitol Police for their service. Thank you for keeping us safe.

My staff and I are safe, please continue to pray for our nation.

The events unfolding at the Capitol are outrageous. We will not tolerate anarchy in this country. pic.twitter.com/RFXmeYh4qS

This is not a protest, this is anarchy. This needs to stop, it’s un-American. pic.twitter.com/AXkDnMnMEz

God bless the US Capitol Police.

Thank you for keeping us safe. https://t.co/5odrNJBBoJ

We have stopped the coup attempt and will be returning to the Capitol today to finish the business of the people. We will never back down, we will return.

Update: I was trapped in the House Chamber with a few members for a little while as protestors tried to ram down the doors. We didn’t know how we were gonna get out, but Capitol Police were able to clear a route and get us out. We’re all now being protected in a secure location.

This is what it has come to. pic.twitter.com/nYlGeKemAf

I’m currently in lockdown in the House chamber as the President of the United States incites his supporters to violence and to storm the Capitol. This is the outcome of Trump’s presidency.

President Trump instigated a violent attack on our government in an attempt to remain in power against the will of the people. He should be impeached, removed from office and arrested immediately.

We will return to the floor as soon as possible to finish certifying the results of the electoral college and declaring Joe Biden and Kamala Harris the next president and vice president of the United States.

With our gas masks in hand, Rep. Scott Peters and I were briskly enroute from the Capitol to an undisclosed location. pic.twitter.com/DMfSK3C3lW

We have been evacuated from the House chamber and moved to a safe location.

This isn’t a protest. This is an attempted coup.

I never thought we’d see such anarchy spurred by our own president.

We are locked down in the US Capitol because the president has instigated a riot to try to block us from certifying the election for his opponent.

This is not who we are as Americans.

We are so much better than this.

The mob will not control our government. We have survived worse and our Republic must continue. Tonight, we should get back to work and show why we are the greatest Democracy in the world.

My staff and I are safe. I strongly condemn those individuals that have chosen to incite violence and have put our law enforcement in harm’s way. Today is supposed to be a day of constitutional debate, not violence. This is not who we are as Americans.

In America, we accept the results of free and fair elections.

We do not — and cannot — ignore the will of voters.

We must follow the constitution, and honor the voice of the people. pic.twitter.com/X7LvovmFFd

My staff and I are safe — we were evacuated from the House floor, and are in a safe location.

Thank you to all of our brave law enforcement officials for working so hard to protect the Capitol Complex.

This only strengthens our resolve to get the Electoral Votes counted & certified and continue with a peaceful transition of power, as has been a hallmark of our nation. It’s time to get back to the business of the people & of the country as we build a better future.

I’m safe, but I’m filled w/sadness & anger as we witness these protests. It’s the result of a fever that has been building for weeks, months & years, and which has only been further incited by President Trump. Today is a point of inflection & reflection, & we need to say enough.

We need to finish the job of certification as soon as possible to show the world that our democracy is up to this test.

Our democracy is up to this test.

I am safe and my staff is safe. We are currently in a secure lockdown. Today’s attack on the Capitol and our democracy is dangerous and unacceptable.

My staff and I are safe and in a secure lockdown. Grateful to Capitol Police for their work to protect us.

It’s a sad day for our country, but our democracy is stronger than the dangerous attack on the Capitol today.

If you’re a Republican elected official and not publicly condemning the *literal* attempted violent overthrow of our democracy, you have a dangerously wrong sense of what it means to be a public servant.

From a Jan. 6 statement

“American democracy is under attack. Nothing short of a siege is raining down on Congress, incited by a president who has refused to give up power after a free and fair election and enabled by those willing to turn a blind eye as our foundational principles are trampled. Our democracy is precious and requires constant vigilance and protection. Today was a harrowing reminder that it can crumble without the efforts of everyday Americans working to keep it strong.

“Now is the time for every patriotic leader in our nation, regardless of party, to call for peace and an immediate halt to this violent attack. Our country has a rich history of bipartisan cooperation and common sense. We must work together to ensure that these values prevail again and encourage the public to remain peaceful and solemn in the face of those who wish to divide us.”
Colorado Senate Republicans

From a Jan. 6 statement

In response to the eruption of violence in Washington D.C. – and specifically at the United States Capitol – members of the Colorado Senate Republicans have released the following statements:

“As we prepare for the 2021 Colorado general session, I am grateful for the reports from the Colorado State Patrol that, thus far, protests at our state Capitol today have been peaceful.

Watching from afar, it saddens me to see our great nation so divided as violence has erupted in Washington D.C. While I honor the people’s right to peacefully protest, I strongly condemn such violence and the siege upon our nation’s Capitol.

I anxiously await confirmation that all nine members of the Colorado delegation to Congress, Republicans and Democrats, are safe.

Let us all renew our allegiance to the Constitution of the United States and to the Colorado constitution and work together in the interests of the People of Colorado.”

“When ANTIFA members were desecrating the Colorado State Capitol and businesses around it, we took a stand when Senate Democrats did not. Today, we take the same stand and condemn those who are committing acts of violence at the United States Capitol. In contrast to those across the aisle who ‘stood in solidarity’ with those who attacked people’s house in Denver, I do not stand in solidarity with those who attacked the people’s house in Washington, D.C.”

“America is a wondrous experiment in self government. The constitution and rule of law are foundational to that self governance. Violence has no part in it.

You have heard me promote free speech and condemn violence before. I did so when violence struck the people and State Capitol of Colorado earlier this year. I do so again today. The violence at the US Capitol is outrageous and despicable.

The US Capitol, like the Colorado Capitol are house’s of the people. They are symbols of the majesty of our sovereignty as individuals and markers for our ability to govern ourselves.

We have cause for vigorous policy disagreements today. American exceptionalism and our sovereignty as individuals win if we obey the rule of law as we resolve those disagreements. Those who resort to violence diminish the hope and value of our Republic.”

“This is a sad day in the history of a nation born on the foundation of individual rights, the United States Constitution, and the rule of law. No matter what our strongly held beliefs may be, disrespect for our institutions and resorting to violence is not appropriate. To preserve freedom and our right to free speech, we must do so without violating our laws or the rights of others. I do not support the actions of the individuals who choose the methods playing out on our TV screens today.”

“Violence is a sign of weakness.”
President-elect Joe Biden

America is so much better than what we’re seeing today.

I call on President Trump to go on national television now to fulfill his oath and defend the Constitution by demanding an end to this siege.

Let me be very clear: the scenes of chaos at the Capitol do not represent who we are. What we are seeing is a small number of extremists dedicated to lawlessness. This is not dissent, it’s disorder. It borders on sedition, and it must end. Now.

I am asking for everyone at the U.S. Capitol to remain peaceful. No violence! Remember, WE are the Party of Law & Order – respect the Law and our great men and women in Blue. Thank you!

Please support our Capitol Police and Law Enforcement. They are truly on the side of our Country. Stay peaceful!

Mike Pence didn’t have the courage to do what should have been done to protect our Country and our Constitution, giving States a chance to certify a corrected set of facts, not the fraudulent or inaccurate ones which they were asked to previously certify. USA demands the truth!

The violence and destruction taking place at the US Capitol Must Stop and it Must Stop Now. Anyone involved must respect Law Enforcement officers and immediately leave the building.

Peaceful protest is the right of every American but this attack on our Capitol will not be tolerated and those involved will be prosecuted to the fullest extent of the law.