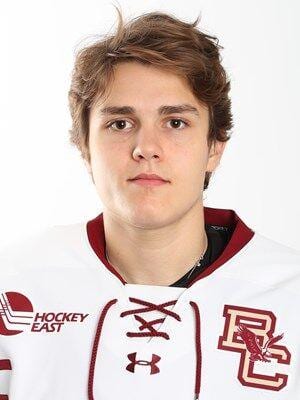 There could be at least six new faces, probably more, representing the Colorado College hockey team next fall.

A half dozen players have posted on Twitter about transferring to the program in time for the 2021-22 season. Among them is Danny Weight, the son of former long-time NHL center and coach Doug Weight.

Danny Weight, whose dad Doug Weight played 19 seasons for several teams, announced via Twitter in April that he will be transferring from Boston College.

“Very excited to announce that I will be joining @CC_Hockey1 next season. Thanks to BC for the memories and friendships made this year. With that said, I am thrilled for this new opportunity and can’t wait to get out west this fall!” Danny Weight said on the website.

Danny Weight, a left-handed shooting center, recorded two points (1 goal, 1 assist) in 19 games as a freshman for the Eagles.

Prior to Boston College, he played for Penticton in the BCHL and led the team in goals with 25 during the 2019-20 season.

Weight also spent two seasons in the U.S. National Team Development Program at the Under-17 and Under-18 level and won gold with Team USA at the 2018 U-17 World Hockey Challenge.

Doug Weight played 19 seasons in the NHL for the New York Rangers, Edmonton Oilers, Carolina Hurricanes, Anaheim Ducks, St. Louis Blues and New York Islanders. He had 278 goals and 755 assists in 1,238 regular season games. He was a four-time all-star and was on the Carolina team that won the 2006 Stanley Cup.

Tigers’ play-by-play announcer Ken Landau was recently honored with a second-place award for “Best Sports Coverage by an Individual or Team” in a major market from the Colorado Broadcasters Association for the year 2020.

Landau is heading into his 16th season calling CC games. He has earned second-place honors three times and has five first-place awards from the CBA.

“I am beyond proud that KRDO NewsRadio is the broadcast home for Ken Landau and Colorado College Tiger Hockey,” KRDO program director Andrew Rogers said.

Landau is a 1982 graduate of Michigan State. He called the play-by-play for MSU hockey from 1979-85, then again from 1990-97. He also spent three seasons serving in a similar capacity at Michigan.