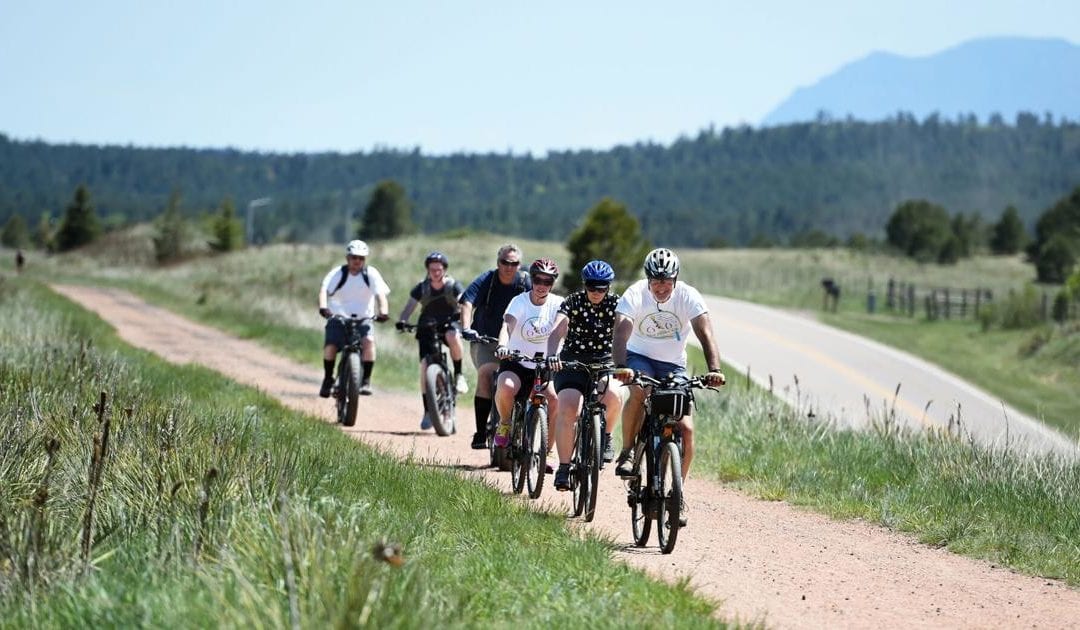 Electric-powered bikes will be allowed on all trails managed by the city of Colorado Springs during a year-long trial beginning May 31.

Officials announced the pilot program Friday, following a presentation to the city’s parks board.

Previously, Class 1 e-bikes — with pedal-assisted motors ceasing at 20 mph — were allowed on urban, commuter paths, such as the Pikes Peak Greenway. Come summer, while land managers consider the longterm future, Class 1 e-bikes will be allowed on any trail where regular mountain bikes are permitted.

Class 2 e-bikes, with no pedaling required to activate boosts up to 20 mph, will be allowed on urban paths as part of the pilot program.

“The powers that be in the city recognize that emerging technology is going to help our community be a whole lot more inclusive,” said El Paso County Sheriff Bill Elder, an e-bike rider and outspoken supporter. “Some like me are challenged in trying to ride bikes without some form of assistance. So I think this is brilliant.”

Also Friday, the city announced it would implement a 15 mph speed limit for all bikes on all trails during the year.

Measuring speeds of e-bikes and standard mountain bikes will be part of the year’s analysis, said Scott Abbott, the city’s parks, trails and open space manager.

This kind of data collection “is new to us,” Abbott added. “So it’ll kind of formulate itself as we go.”

That explanation isn’t convincing for some.

“I generally approve,” said Ron Ramsey, a local e-bike proponent. “But that study is ripe for abuse and misinterpretation. … Who’s going to be out there with speed guns? Volunteer mountain bikers?”

While voicing some reservations — some cycling purists hotly contest e-bikes — the city’s mountain biking advocacy organization, Medicine Wheel, has favored an exploration of e-bikes on trails.

“We acknowledge e-bikes are appropriate in some places,” said Cory Sutela, the nonprofit’s executive director. “We thought a step-by-step, phased approach would be better than this sort of blanket approach.”

“We know locally these bikes are already out there,” Abbott said, “and not that that’s an excuse or reason why we (decided) across all trails, but we really do want people to have the ability to spread out, so you’re not concentrating some new technology in one or two different areas. If the pilot program allowed e-bikes on one park, say, well then all e-bikes would go to that park, and it would throw off the feel.”

As for the 15 mph speed limit, Abbott said the goal is to educate before enforcement, with signs and staff along with volunteers expected to be posted at trailheads. He mentioned the parks department in the past coordinating with police to write citations for people with dogs off leash, another posted rule.

“It could work itself to that point,” Abbott warned.

The moves come after a parks department survey in November gauged residents on the emerging technology. Officials in January reportedly finished compiling data from more than 1,600 responses.

Charts recently provided to the parks board showed strong support for and against expanded e-bike access. Supporters aligned on being able to enjoy the outdoors as they did when they were younger and more able, while opponents expressed concern of increased conflicts and damage on trails.

“We really saw quite a bit of angst on both sides, but largely we had a bigger turnout for people who wanted to see expanded e-bike access,” Abbott told The Gazette.

Some parks board members weren’t convinced. To one, Carol Beckman, results appeared equally for and against. To her, they seemed to closely mirror a previous Medicine Wheel survey that yielded close to a 50/50 split on e-bike access.

Others expressed dismay that the pilot program was moving ahead without elected officials voting. Abbott called it an administrative move.

“As chair (of the parks board), I’m not saying everything the parks department does has to be approved by us. That’s not our purpose,” Ron Ilgen said. “But on things especially of concern to the community, we would like to be somewhat representative for the community.”

Beckman was among board members wondering how electric motors were exempt from designated non-motorized trails. “How do you say an electric motor is not a motor?” she asked.

The e-bike debate has spread across Colorado, especially since 2019, when a secretarial order encouraged the Bureau of Land Management to allow e-bikes on federal acreage. The cycling industry reports the charged-up wheels account for the fastest-growing sector of business.

In recent years, Jefferson and Boulder counties have been among Front Range communities to allow certain e-bikes on certain trails in their park systems.

Class 1 e-bikes continue across Jefferson County open spaces since being researched in 2018, while they’re limited to most “plains” trails in Boulder County, rather than preserves in the foothills and mountains. That county’s pilot program in 2019 found standard mountain bikes to be generally faster than e-bikes — average speeds of 14.5 mph compared with 13.8 mph. Though, in an interview with The Gazette, the program manager, Tina Nielsen, recognized a “massive caveat” with a small sample size in a limited focus area.

At the time in 2019, Nielsen recommended county commissioners vote for e-bikes despite survey results showing 57% community opposition. The resistance was largely due to “general bike hate,” she told The Gazette.

“There’s a lot of anxiety about bikes,” she said. “It’s not just e-bikes.”

Earlier this month in Steamboat Springs, outcry led officials to rolling back an e-bike pilot program that was to include Emerald Mountain, considered the crown jewel of the town’s park system.

“I think something worth mentioning is, you know, mountain bikes in the traditional sense, we are still fighting for access and acceptance,” that area’s top mountain biking advocate, Laraine Martin, told The Gazette.

The group she leads, Routt Count Riders, has aimed to remain neutral on e-bikes. Several such groups have aligned with the International Mountain Bicycling Association’s stance accepting Class 1 e-bikes — “as long as access is not lost or impeded for traditional mountain bikes.”

In the Springs, Ramsey recognized a perceived threat of e-bikes.

“One fear articulated by non-e-bike people is that the numbers are going to increase and it’s going to diminish the (outdoor) experience,” he said. “And I agree; I think e-bikes are growing exponentially, and any time somebody gets them and enjoys them, it’s going to be a bigger problem. But this is the problem whenever people live together congested like we do on the Front Range.”