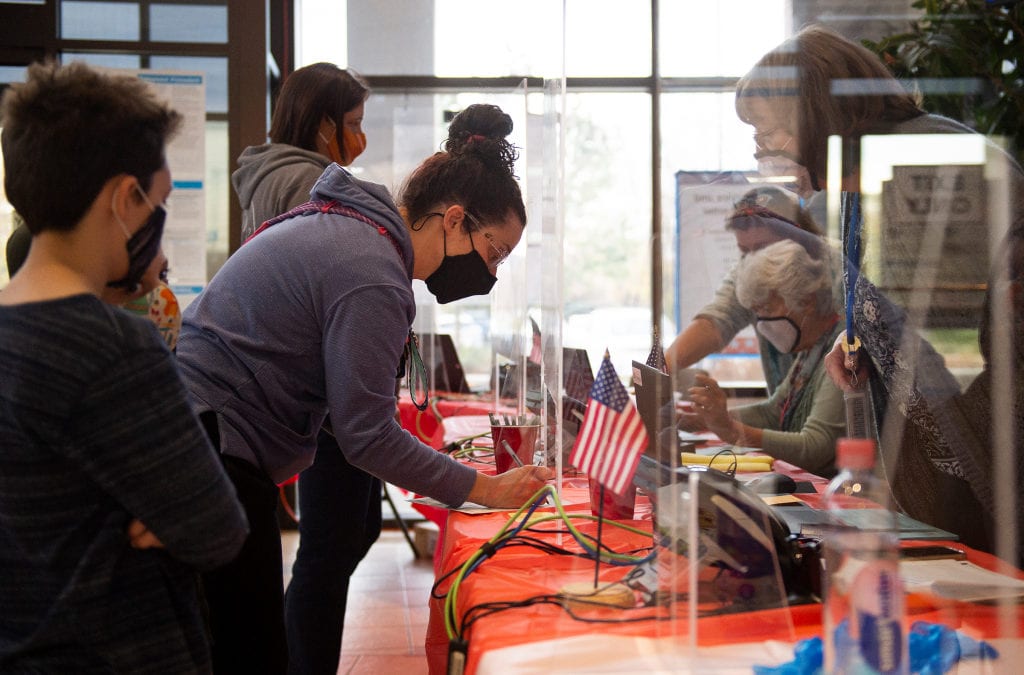 Colorado political campaigns feverishly hit the phones, bombarded voters with text messages, knocked on doors and rallied on busy street corners Monday as the 2020 campaign neared its end, but the breakneck pace of ballot returns has left a dwindling number of votes to chase down.

As of late afternoon, voters had submitted 2.77 million ballots — nearly 97% of the total cast by Coloradans in the 2016 election,  according to ballot-return figures from the Colorado secretary of state’s office.

Turnout rates had already reached 66% of registered voters and 73% of active voters. Both figures trailed the comparable 2016 rates by greater margins than the raw-vote comparison, though, because the state’s population and voter rolls have grown since then.

Ballots must be received by county elections offices or placed in drop boxes by 7 p.m. Tuesday, when polls close.

About three dozen volunteers were getting ready to dial up voters on the Western Slope and in Pueblo. Their focus was on building support for Democrat Diane Mitsch Bush in her tight 3rd Congressional District race against Republican Lauren Boebert.

“What you all are doing right now today is far more important than any single game that I’ve ever played in,”  Wambach told them. “I really mean that. You are actually capable of changing the world in much bigger and more important ways than I could have ever done on the soccer field.”

But Colorado Republicans said their turnout operation also was in full swing, and they were fighting for every vote.

They appeared to have the tougher lift in the final hours. Ballot-return statistics showed that even though voters affiliated as Republicans had submitted slightly more ballots by Monday afternoon than they had on election eve in 2016, they still were trailing registered Democrats and unaffiliated voters significantly.

Four years ago, Republicans slightly edged out Democrats in returns by that point and were well ahead of unaffiliated voters. But the latter two groups went on to vote heavily on Election Day. This time, political observers have speculated that Trump’s critical comments about mail voting could reverse that turnout dynamic in Colorado.

“We have our team still going full blast on phone banking and door-knocking across the state,” said Joe Jackson, a state party spokesman.

Gardner spent Monday campaigning with Boebert at events on the Western Slope, he said.

Republicans plan to have poll watchers in place in all 64 counties on Tuesday as part of the party’s Election Day operation, Jackson said.

Along with the potential for record turnout, the election has heightened anxieties among partisans and sparked concerns of heated demonstrations in coming days. On Monday, some downtown-area businesses were boarding up their windows in response to warnings about potential unrest from Denver city officials, who were standing up a police command center as a precaution.