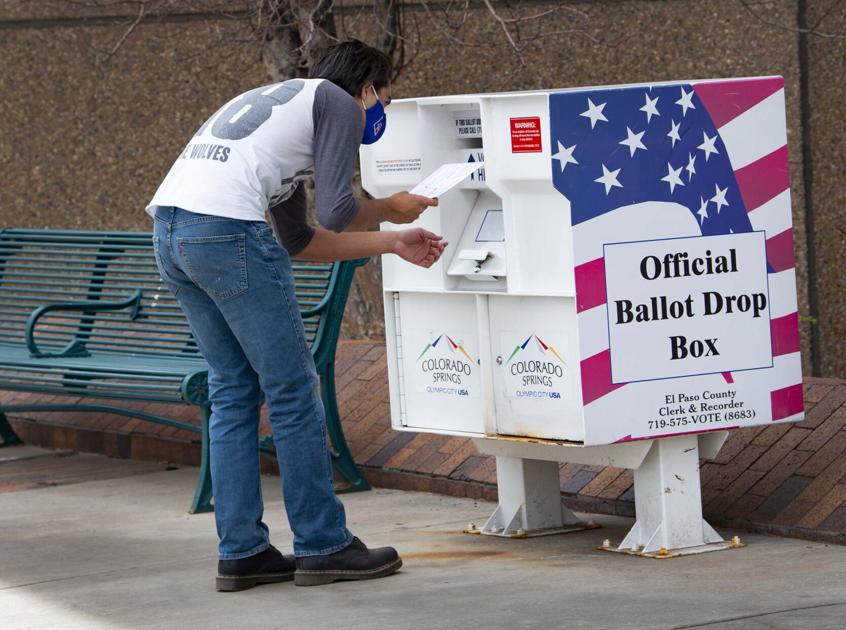 The Title Board on Wednesday declined to advance a ballot initiative that sought to ban universal mail voting and require a fingerprinted, government-issued “elector card” to vote in person.

The board found the measure didn’t fit within the state’s “single subject rule” a constitutional measure that limits ballot measures to a single topic.

Backers maintained the measure’s contents fell under the topic of election integrity, but board members saw new constraints on legislative and judicial authority as additional subjects.

“It’s not whether we like it or don’t like it. It’s just a separate subject,” said board Chair Theresa Conley, representing Secretary of State Jena Griswold.

The three-member board has jurisdiction to set an initiative’s ballot title for voters, thereby advancing the measure to the signature-collection phase, but only if the supporters pass a review for a single subject. For Initiative 38, designated representatives Margot Herzl of Littleton and Anna Omsberg of Bailey argued that the measure appropriately touched upon multiple facets of the electoral process.

“Election integrity is about a lot more besides just security. A big part of it is removing conflicts of interest by people who are running elections,” Herzl said.

Aside from eliminating ballot drop boxes and overturning the ability of residents to register and vote through Election Day, Initiative 38 also stated that judges, among other authorities, may not “alter election law by agreement, consent decree, or otherwise; such actions are felonies and void.”

Board members believed such a provision amounted to a limitation on the courts’ authority to review laws dating to the landmark decision of 1803, and was therefore a second subject.

“I guess my concern is that the power of the courts to do constitutional judicial review has been well established for over 200 years in this country,” said Jason Gelender, representing the Office of Legislative Legal Services. “Regardless of the merits of this particular measure, it seems to me that this provision is intended — or at least the way it reads — is to prevent the court from exercising that power when looking at not only this measure, but any other election law.”

Herzl said the intent wasn’t to block judges from ruling on election law, but only that “they can’t change it.” When asked whether the measure would make it illegal for a court to find that any portion of the initiative itself was unconstitutional, Herzl responded, “I honestly don’t know the answer to that.”

The board also took issue with another portion of the measure to bar changes to election laws and procedures in even-numbered years.

“That’s a simple removal of conflict of interest because you have people who want to do short-term changes that will, they think, help them in the short term,” Herzl explained. “It’s better that the law remain stable for a longer period of time so that you don’t have any kind of last-minute shenanigans.”

Gelender responded that the power of the legislature is only subject to constitutional restrictions. Initiative #38 would alter state statutes, and not amend the constitution. In light of that fact, Herzl conceded the prohibition on election law changes appeared to violate the constitution.

David Powell, the representative of Attorney General Phil Weiser, also expressed doubts about the relationship of other provisions to the concept of election integrity. Initiative #38 would have also changed procedures for filling congressional vacancies and a curtailed the government’s ability to fund voter registration or turnout efforts. Those elements were, in Powell’s view, unrelated to the single subject.

The board voted unanimously to find it lacked jurisdiction to set a title the measure as writte, sending supporters back to the drawing board. At its prior meeting in May, board members also declined to take action because the designated representatives had not submitted the initiative paperwork in accordance with state law.