Colorado Bill Would Allow Human Remains To Be Composted — No, This Is Not Satire 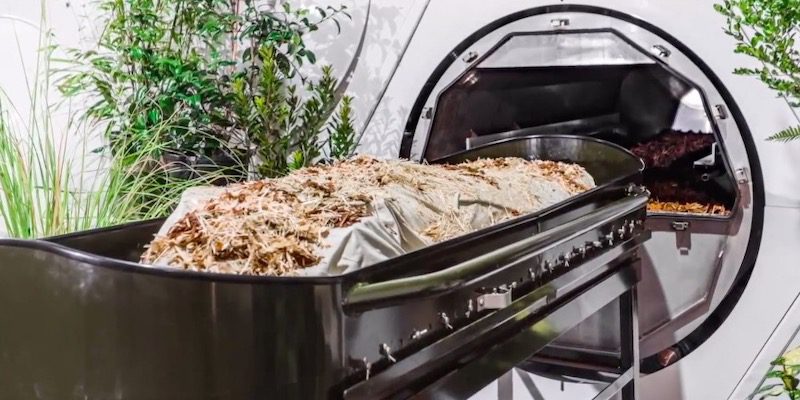 Big Tech is clamping down on conservative media big time. Don’t let Big Tech pre-chew your news. Sign up for our free email newsletter, and we’ll make sure to keep you in the loop.

A commonly used meme phrase on social media is, “Every day we move further from God’s light.” In this case, it’s true.

Just when you think that the dehumanization of people has hit rock-bottom, leftists start digging.

Cultures all over the world have treated a deceased human body with care because it was always understood that there was something different about a human being that differentiates it from the rest of nature. In Christianity, that’s that man is the imago Dei — made in God’s image.

But to leftists in Colorado, we’re nothing better than fertilizer. It’s dehumanizing.

A bill to allow for “human composting” has been proposed in Colorado by State Rep. Brianna Titone. Titone is, of course, a Democrat.

The bill would allow, “human remains to be converted to soil using a container that accelerates the process of biological decomposition, also known as ‘natural reduction.’” It would allow the soil to be used to grow plants, but forbid it from being used to grow food for humans or animals. The bill also bars anyone from selling or offering to sell the soil, mixing the soil of one person with another (for example in a single container) without the consent of the person who has final disposition — unless the soil has been abandoned.

Rep Titone said, “To have something they could have brought back to them to grow flowers and trees in to remind them of their loved ones is so important to people.”

If Bill SB21-006 passes, Colorado would be the second state to allow for “human composting” following Washington state’s lead.

Through the technique called natural organic reduction, a human body decomposes in just four weeks. Colorado’s state senate on Tuesday began considering a bill that would allow this technique.

The process involves pod-like vessels that decompose a body into soil in just 30 days. A body usually takes about a year to decompose on its own.

It’s a service Feldman Mortuary of Denver is interested in offering if Colorado allows it.

“This is much better for the environment than a traditional burial. The carbon footprint is very low,” says Jaimie Sarche, director of pre-planning for Feldman Mortuary.

Here’s how it works. The body is laid in the vessel filled with alfalfa and woodchips. Four weeks later, it’s broken down into pure soil.
Source: Fox 31 Denver

The Catholic Church in Denver opposes turning human beings into fertilizer and will be opposing the bill.

“The Catholic Church teaches that human life and the human body are sacred, and the dignity of the human person is the foundation of a moral society. The conversion of human remains to soil does not promote human dignity. The Church’s objection is based on its belief that man is made in God’s image and likeness as a unified compositum of body and soul. While the Church does allow for cremation with limitations, the reduction of human remains into soil is not consistent with the Church’s theology of bodily resurrection and the promotion of human dignity and dominion over the earth.”

Good for them! More churches should join them in their opposition.

Ira Einhorn, the co-founder of Earth Day would be so proud! After all, he was an innovator. He composted the girlfriend that he murdered before it was cool…or legal.

Check out ClashRadio for more wit and wisdom from ClashDaily’s Big Dawg. While you’re at it, here’s his latest book: