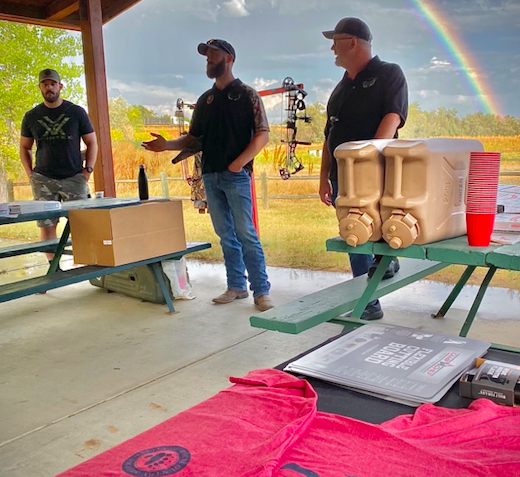 The Colorado Backcountry Hunters & Anglers (BHA) Northern Colorado Group hosted an Elk Calling Seminar and Contest at the Fort Collins Archery Range on Thursday, August 19. Tom Diesing, owner of Mile High Note Game Calls, joined us along with his son (and friend, CJ) and gave a highly informative and engaging seminar on elk calling. Tom and his son are both world class champion elk callers with years of experience in both hunting and calling contests.

The twenty people in attendance were treated to a Q&A discussion on various elk calling techniques and hunting strategies. Later, attendees formed into groups with Tom and his crew working individually with participants on their elk calling skills. At the end of the evening there was a calling contest with participants winning prizes ranging from OnX 1-year memberships, Mile High Game Note Grunt tubes and reed calls, and $100 gift cards to a local building supply company in Loveland (Uncle Benny’s Building Supplies).

“Many thanks to Tom, his son, and CJ for joining us and volunteering their time and efforts,” said Northern Colorado Regional Director Sam Williamson. “Tom has been an ally and supporter of BHA for many years and we can’t thank him enough! You can check out his website at https://www.milehighnotegamecalls.com/. He offers elk calling classes and sells awesome gear!”

“Also, shout out to our brand-new Northern Colorado Regional Assistant Directors, Jon Lang, Zack Scott, Graham Geary and Trent Budish for volunteering, planning and coordinating this event,” Sam added. “This team in Northern Colorado is building steam and I can’t wait to see what we will accomplish to build up this region even stronger!”

“The Northern Colorado Group is firing on all cylinders thanks to Sam and his growing group of selfless, boots on the ground leaders,” said Colorado BHA Co-Chair David Lien. “They’re poised to pour more gasoline on the fire and we can’t wait to see where it spreads as they become an even louder voice for our wild public lands, waters and wildlife!”

Founded by , a former U.S. Army field artillery officer, and formed around an Oregon campfire, in 2004, Backcountry Hunters & Anglers is the voice for our nation’s wild public lands, waters and wildlife. With over 40,000 members spread out across all 50 states and 13 Canadian provinces and territories—including chapters in 48 states, two Canadian provinces and one territory, and Washington, D.C.—BHA brings an authentic, informed, boots-on-the-ground voice to the conservation of public lands. Since the Colorado BHA chapter was founded by (a former U.S. Marine Corps helicopter pilot) in 2005 (the first official BHA chapter), they’ve grown their boots-on-the-ground presence to some 2,200 dedicated hunters and anglers.