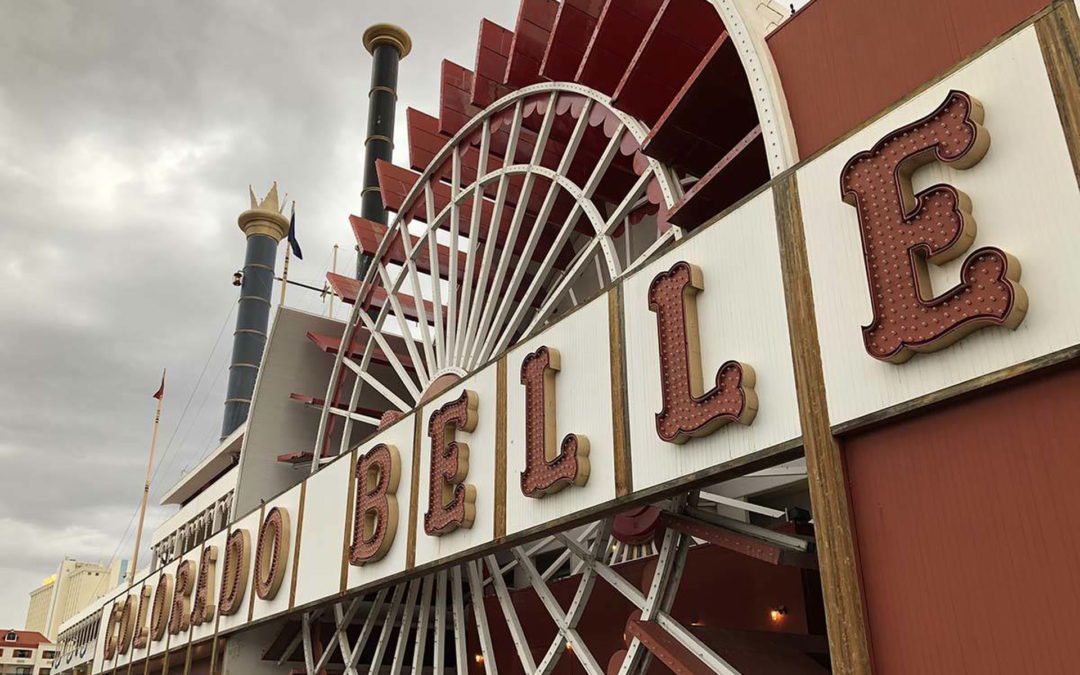 The Colorado Belle, an iconic hotel-casino on the Colorado River in Laughlin, will stay closed for the foreseeable future and lay off its 400 workers.

Casino operator Golden Entertainment Inc. said closures to stop the spread of the coronavirus pandemic in March and uncertainty about the return of the market led to the decision.

In a letter dated Thursday from an executive with Golden Entertainment, employees were told the 1,168-room hotel would not reopen when Gov. Steve Sisolak and gaming regulators authorize it and that their health care benefits would end May 31. Some employees could transfer to Golden’s two other Laughlin properties, the Edgewater and the Aquarius, or to its Las Vegas or Pahrump operations.

Golden also operates a network of taverns in Nevada under the PT’s and Sierra Gold brands.

“Once we are allowed to open our other Nevada properties, we will have a better sense of the open positions available across the company,” Charles Protell, president and chief financial officer of Golden, said in an email.

In addition to a 42,706-square-foot casino with about 750 slot machines and 16 table games, the Colorado Belle has a microbrewery and restaurant with indoor and outdoor riverside seating. It also has two pools and an outdoor bubbling spa.

Located on the banks of the Colorado River just south of Davis Dam, the property has drawn attention with its iconic look. But Golden executives fear customers will be slow to return once casinos get the green light to reopen.

“The significant economic impact from the governor’s ordered closure of our industry and continued uncertainty of when we will be allowed to fully resume operations has caused us to make the difficult decision to extend layoffs indefinitely for approximately 400 team members at the Colorado Belle in Laughlin,” Protell said in a prepared statement.

“We will continue benefits coverage for affected team members through May and will try to place these team members with our other properties that may have open positions.

“This decision has not been made lightly, but unfortunately we see this as our only recourse to mitigate ongoing expenses and anticipated reduced business levels while facing competitive pressures from neighboring states allowing their casinos to reopen,” Protell said.

The Colorado Belle was part of the Circus Circus Enterprises empire when it first opened. It was then owned by the Mandalay Resort Group when Circus Circus was acquired, and by MGM Mirage when it acquired Mandalay in 2005.

MGM Mirage sold the Colorado Belle and the neighboring Edgewater to Anthony Marnell III and Sher Gaming for $200 million in January 2007.

Golden Entertainment bought both properties from Marnell and Sher for $190 million in January 2019.

The acquisition positioned Golden as a market leader in Laughlin, owning three of the 10 properties in the small community where Nevada, California and Arizona converge.

“Future plans for the Colorado Belle will be highly dependent on the business volume at our other Laughlin properties and the Laughlin market in general,” he said.

Laughlin has struggled through the years because of competition from California and Arizona tribal casinos, but it still has a following from the growing Kingman and Bullhead City, Arizona, and Golden Valley areas and as a getaway for Las Vegans.

The Las Vegas Convention and Visitors Authority assists with community marketing as one of two rural destinations it supports, and Laughlin has built popularity with an emphasis on water sports and boating on the river and on nearby Lake Mohave, a part of the Lake Mead National Recreation Area. Its outdoor Laughlin Event Center can seat up to 21,000 people for headliner events and concerts.

The global pandemic closed all nonessential businesses in Nevada, including casinos, by March 18. Colorado Belle employees were laid off effective April 3.

A letter to employees from Katherine Roden, Golden’s vice president of human resources, said “we anticipate reduced business levels which will last for an unknown period of time. Due to these challenging circumstances, the company has no current plans to reopen the Colorado Belle property and the layoffs currently in place will extend indefinitely.”

This is a developing story. Check back for updates.