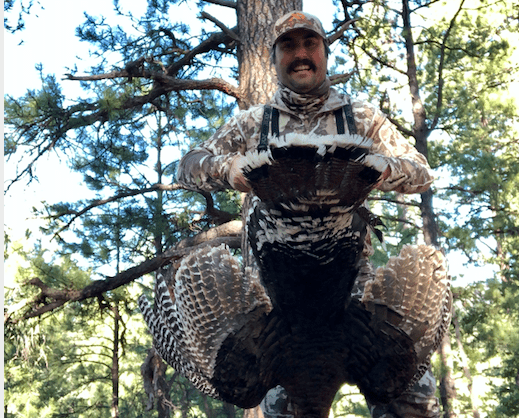 The Colorado chapter of Backcountry Hunters & Anglers (BHA) recently appointed Geordie Robinson to serve as their chapter “Culinary Liaison,” a first of its kind position for BHA state chapters and in line with Colorado breaking trail as the first official BHA state chapter, formed during 2005, only a year after the “Gang of Seven” stood around the first BHA campfire during March 2004.

Geordie was a featured chef at the 2021 North American Rendezvous Field to Table Dinner and has organized five Colorado BHA Annual Wild Game Cookoffs. In addition, he has contributed stories and recipes to BHA’s Field to Table blog, including Canada Goose Pitas (also featured in the 2021 BHA Calendar) and Fox Squirrel Carnitas (see related links below). He has recently transitioned from 10 years in GIS Analysis to taking on a role as an Off-Site Chef for a local catering company. George was born and raised in Texas.

“I grew up fishing sunfish in the small creek behind my house, and largemouth bass in the old quarry down the street,” he says. “Growing up on 3.5 acres in a rural area outside Plano, Texas, my childhood home was surrounded by five massive pecan trees, some oak trees and different fruit trees–prime fox squirrel habitat. At age 7, I received my first Daisy pump BB gun. My Jack Russell terrier and I would bay up squirrels, and I would try to shoot them out.”

Geordie says he didn’t officially start hunting until after graduating from college. He received a bachelor’s degree in Geography from The University of Colorado-Boulder and currently lives in Longmont. He hunts most often in Southwestern and Northeastern Colorado along with the Wyoming prairie. He primarily fishes Front Range streams and the Arkansas River basin.

“I am mostly pure fly fisherman these days,” Geordie said, “targeting trout, but also panfish and bass; however, I do a fair bit of trolling for walleye off the canoe. I am a generalist hunter: targeting whatever the season provides. I hunt spring turkey, antelope, mule deer and elk annually.” He’s a self-taught fly-fisherman and hunter (sans waterfowl) and uses both a compound bow and rifle.

Geordie learned waterfowl hunting from Backcountry Hunters & Anglers State Policy Director, Tim Brass, who’s also a Colorado resident, and Colorado BHA Co-Chair, Don Holmstrom.  “Over the last seven years, I have invested heavily in the process of procuring my own food,” he said. “My hobbies of hunting, fly-fishing and gardening fill my freezer and the bellies of myself and loved ones.”

“However,” Geordie adds, “I would say that I am most inspired by Hemingway’s ‘Green Hills of Africa,’ the stories of my grandfather hunting hogs in the Everglades with his .357 magnum, and my father’s deer, turkey and javelina hunting down in Texas.” Geordie also served as a Colorado BHA Assistant Regional Director for the chapter’s Northeast Colorado Group and then Regional Director for the Boulder County Group.

Founded by , a former U.S. Army field artillery officer, and formed around an Oregon campfire, in 2004, Backcountry Hunters & Anglers is the voice for our nation’s wild public lands, waters and wildlife. With over 40,000 members spread out across all 50 states and 13 Canadian provinces and territories—including chapters in 48 states, two Canadian provinces and one territory, and Washington, D.C.—BHA brings an authentic, informed, boots-on-the-ground voice to the conservation of public lands. Since the Colorado BHA chapter was founded by (a former U.S. Marine Corps helicopter pilot) in 2005 (the first official BHA chapter), they’ve grown their boots-on-the-ground presence to some 2,500 dedicated hunters and anglers.