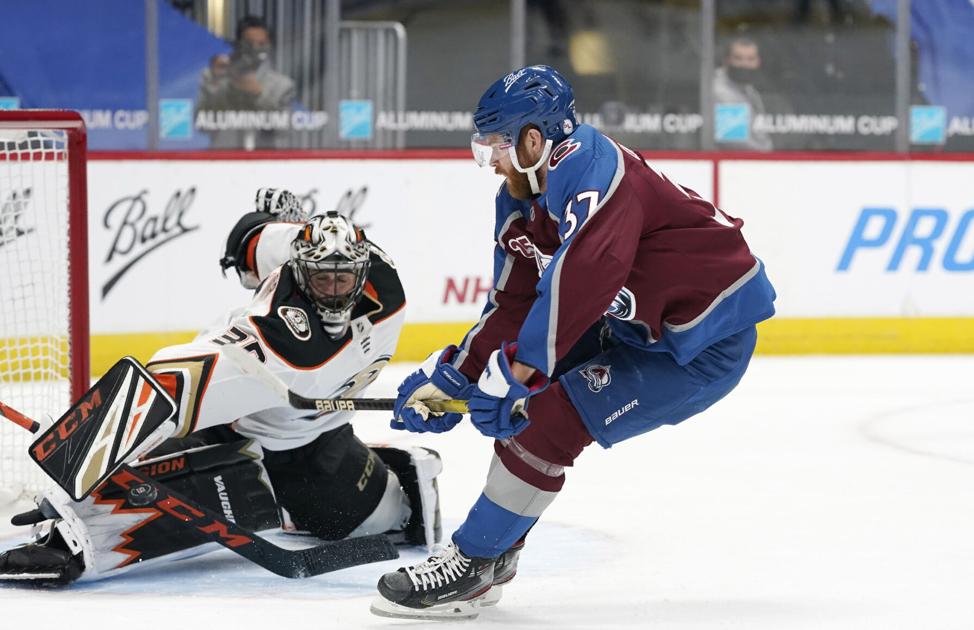 DENVER — Only those on the ice know who won the war of the words Monday between the Colorado Avalanche and Anaheim Ducks.

After all the shoving and jawing, culminating in a fight between the oldest skater on each team in Pierre-Edouard Bellemare and Ryan Getzlaf, the Avalanche won where it mattered, 5-2.

It was the final game before the Ball Arena stands fill again. In the last bit of hockey without fans, forward Tyson Jost said, Colorado needed a spark.

“That’s something we’re talking about as a team, just standing up for each other and (having) a pack mentality,” Jost said.

Cale Makar had three assists and was plus-4. His shot tipped in by Gabriel Landeskog stood up as the game-winner.

Jost gave the Avalanche the lead for good in the second period. He buzzed around the net, sending a shot off a stick and into the boards. He and his linemates wouldn’t be denied, and a rebound popped out to him before hitting twine.

Mikko Rantanen scored his 20th of the season and eighth in 10 games to open the scoring. He backhanded a shot past Ryan Miller, who made 43 saves to Philipp Grubauer’s 13.

“When we had a breakdown, he was there to close the door and make the big saves when we needed them,” coach Jared Bednar said of Grubauer. “He hasn’t been all that busy on most nights but it isn’t just the quantity of shots that makes a goaltender good.”

Anaheim’s Troy Terry closed the gap to 3-2 before J.T. Compher scored on a bad angle. He was rewarded after being stopped earlier on a short-handed breakaway.

Valeri Nichushkin then found himself on the receiving end of one of Makar’s dishes.

“I just tried to kind of throw it around and hope for a good bounce,” Makar said. “Luckily it wound up right on (Nichushkin’s) stick.”

Landeskog’s second-period goal was the only time the power play connected on six tries.

“There’s still a lot of room for improvement,” Rantanen said.

Once the game got away from the Ducks, who played into overtime Sunday, the forced helmet removals behind the nets and shouting between penalty boxes gave way to dropped gloves.

“We’ve seen these guys a lot recently. You get to know one another and there’s some bad blood, I would say,” Bednar said. “I like the way our team responded. We were physical tonight. We were involved.”

100 for Grubauer
Goaltender Philipp Grubauer made 13 saves in his 100th career win. He has 202 total appearances and 175 starts, though as he showed in a relief appearance against the Ducks on March 16, a start is not a requisite for a victory.
Among his best Monday was a short-handed stop on Max Comtois.
No Bo
Bowen Byram missed a second straight game after absorbing a hit from the Vegas Golden Knights’ Keegan Kolesar. He is still day-to-day, coach Jared Bednar said. Dan Renouf again took his spot on defense.
There have been adjustments, but the 19-year-old has quickly carved out a spot for himself. Fellow defenseman Ryan Graves praised Byram’s puck-moving and breakout abilities Monday.
“He just kind of keeps us balanced and he can eat minutes too. He’s big for us and it’s a big loss,” Graves said.
Second line
The first, third and fourth lines found the net Monday night, but the second was held without a point. Ryan Miller slid across the crease to deny Brandon Saad early in the game and Saad missed the net on a breakout in the third period.
Winger Andre Burakovsky owned his own turnovers but praised the group’s defensive play before Monday’s game. He said they have talked about their recent stretch.
“Just some details that weren’t there for us,” Burakovsky said.
“I don’t think we maybe worked as hard as we wanted to for each other.”
Turning point
A quick start went sour on the Avalanche, who finished the first period tied at 1. After Tyson Jost gave Colorado a 2-1 lead, a shot off the post was the lucky break the team needed to build on its lead.
On the horizon

The Avalanche next host the Arizona Coyotes on Wednesday for another one-and-done. Ball Arena will welcome frontline staff, health care workers and first responders.