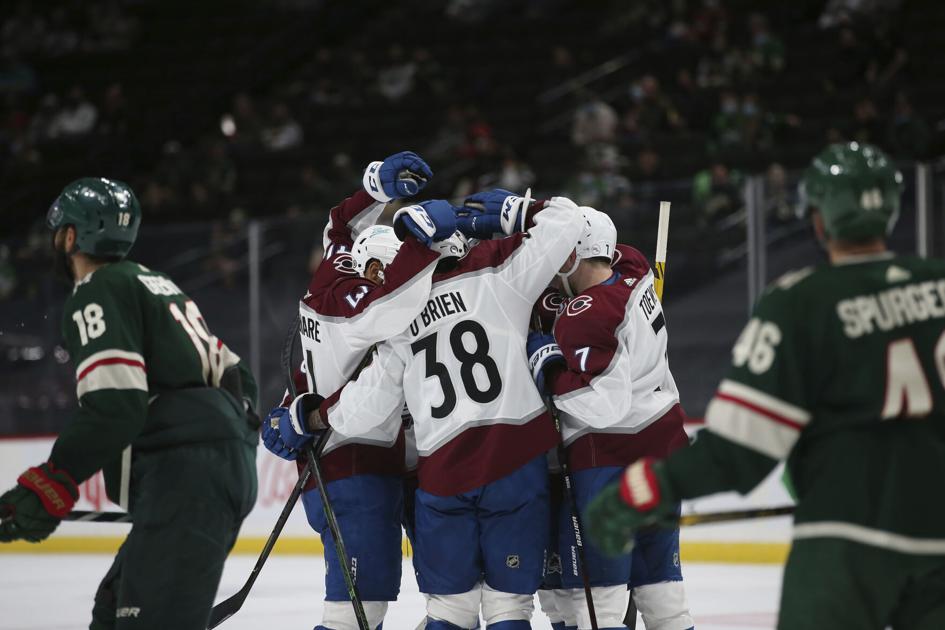 One can never safely assume that the Colorado Avalanche have finally hit a wall.

Nathan MacKinnon fired up the formerly sluggish visitors 18 seconds into the second period when he collected a long pass from Samuel Girard, then blew past the defense alone. He beat Cam Talbot glove side and tied the game at 1.

“It’s not that hard to make those passes as a D,” Girard insisted. “That was a nice play by Nate.”

Three more goals followed before the next period break. The Wild pulled Talbot for the extra attacker and got within a goal with 35 seconds left in regulation Monday night in Minnesota, but the Avalanche made off with a fifth straight win, 5-4, and a standings point in a 15th straight game.

One minute, 11 seconds after MacKinnon’s goal, Andre Burakovsky cleaned up a Girard rebound to give Colorado a lead it never surrendered.

Burakovsky earned the primary assist on Brandon Saad’s 12th of the season that made the score 3-1. As the puck traveled past Jared Spurgeon, Saad shoved the Minnesota captain to the ice, collected the rubber from his skates and sent it past Talbot.

Before the end of the period, J.T Compher redirected a Cale Makar blast to open up a three-goal lead.

“There was no talk of frustration,” after the first period, coach Jared Bednar said. “It was like, ‘This is what we have to do.’ It was being said by our leaders when I was walking in. I tried to give them a little bit of clarity, and off they went. They put the work in.

“I love when our team can respond like that to a little bit of adversity that we probably brought on, on our own.”

The penalty kill finished off back-to-back man advantages between the second and third Colorado goals. The Avalanche power play got a similar special teams stretch in the third period,and Gabriel Landeskog redirected in a Mikko Rantanen feed.

The Avalanche fell behind 1-0 when Nick Bjugstad flipped a centering pass to Ryan Hartman. It was Bjugstad’s turn early in the final period as he scored on a 2-on-1 with Hartman, making the score 4-2. Marcus Johansson scored the Wild’s third goal on the power play.

A one-goal deficit is nothing for Colorado right now. A bad period is usually just that.

“It’s been going on long enough for our team that we believe that if we just play the way we can, we can score a couple goals a period. And if it takes more than that, then we can press a little bit,” Bednar said.

“I think our guys believe in that and believe in one another so the sky’s the limit when it comes to coming back.”