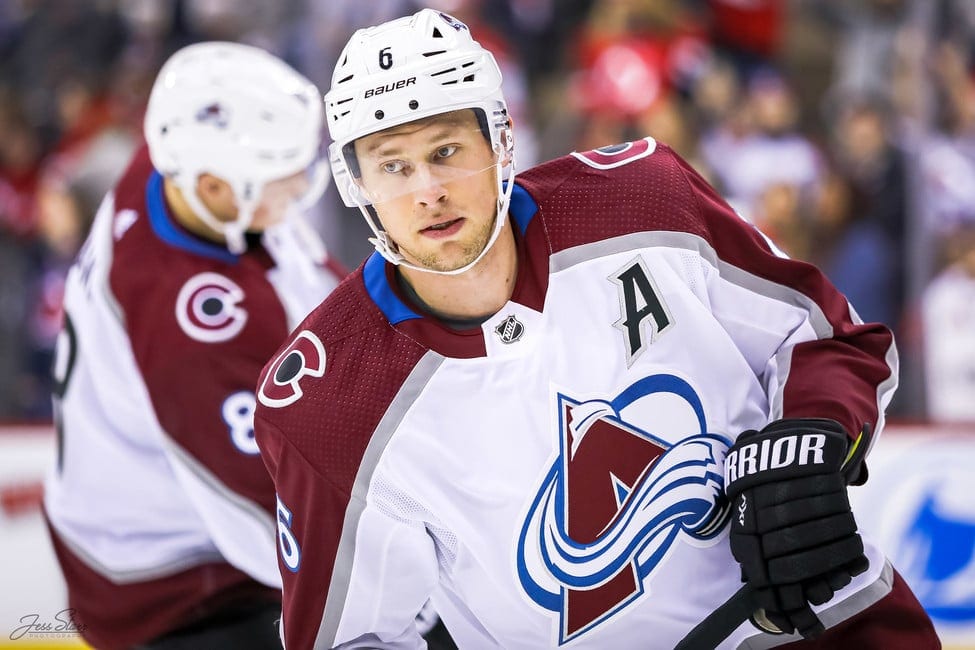 The injury bug has struck the Colorado Avalanche again, but maybe it never left.

Missing players slashed Colorado’s playoff run short last summer, and the bench is getting pretty thin again for the Avalanche just 10 games into this season.

Six players are out, with the most recent being leading scorer Nathan MacKinnon, who only played the first two periods of Sunday’s 4-3 overtime loss to the Minnesota Wild. But out of the six players currently on the injured list, the player they might be missing the most is defenseman Erik Johnson.

The veteran defenseman was hurt in the first period of Saturday’s 5-1 win over the Wild. Johnson was upended on a blistering hit from Jordan Greenway, hitting the ice face and forearm first. He’s now listed as week-to-week with an upper-body injury.

Colorado is 4-0 when Johnson plays and have outscored their opponents 18-6 in those contests. Without him, however, the Avalanche are just 2-3-1 with a much tighter goal-differential of 18-17.

Johnson’s impact was missed at the end of last season, too. Midway through the first period of Game 1 of the playoff series against Dallas, he left with an injury and didn’t play again.

Going into that series, the Avs had held opponents to just 3-for-25 (12 percent) on the power play through the first eight games in the bubble. After Johnson left, the Stars racked up nine power play goals on 23 tries (39 percent) and took the series in seven games.

Johnson missed the first two games of the season recovering from COVID quarantine. He played in Colorado’s 3-2 win over the Kings on Jan. 19 but then missed the next three games for conditioning reasons – stemming from inactivity during the quarantine. He then logged more than 19 minutes in both of the wins against San Jose.

But then the first game in Minnesota happened. The Avalanche went on to win that game, but his presence has been missed, especially with a glut of young defensemen on the roster.

Johnson is clearly the elder statesman in the room. Colorado has played 10 defensemen this season. Johnson has 780 career games under his belt. Entering Tuesday’s game, the other nine combined have 844 games played – and 508 of those belonging to Samuel Girard and Greg Pateryn.

Colorado is blessed with defensemen depth, but even that has its limits. Cale Makar has been, well, the Cale Makar everyone expected with a goal and 10 assists so far. Girard is also in the midst of his best season, and Bowen Byram has shown why he was such a highly-touted prospect.

However, they’ve also been without defenseman Devon Toews, who has missed the last two games after blocking a shot with his foot against San Jose. Toews has been great since arriving in an offseason trade with the New York Islanders, notching three goals and two assists – including a pair of power play goals.

The injuries to Johnson and Toews have opened the door for more minutes for Byram – who has thrived when paired up with Makar – and guys like Jacob MacDonald and Connor Timmins. MacDonald made his season debut on Sunday in place of Johnson and led the team with four shots on goal.

Avalanche coach Jared Bednar went through the injury list after Tuesday’s morning skate before the third of four games against the Wild, and the list was as long as his arm. Along with Johnson, MacKinnon and Toews, the Avs are also without goaltender Pavel Francouz and forwards Matt Calvert and Pierre-Edouard Bellemare.

Not only have the injuries put a strain on the consistency of the lines, but they’re also a scramble for the salary cap. Only Francouz and Calvert are listed on injured reserve, meaning salary cap aerobics have had to be done on an almost daily basis for the Avs with their taxi squad.

After Johnson’s injury on Friday, the Avalanche dressed only 19 players for Sunday’s game in Minnesota. Once MacKinnon left, that meant Bednar had just 10 forwards at his disposal for the final period and overtime.

Following Sunday’s loss, Avalanche captain Gabriel Landeskog said he’d rather deal with these injuries now than in May or the playoffs. If Colorado can get through these games with some victories while missing so many important pieces, and be healthy heading into the playoffs, maybe there might be a silver lining after all.