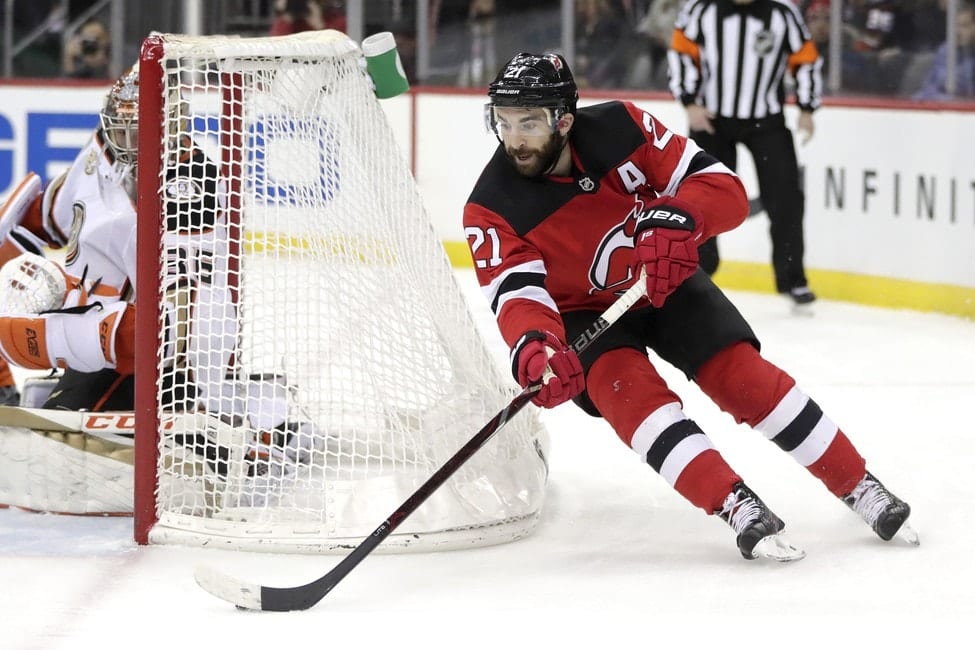 The NHL Trade Deadline is still about a month away, but that just means there’s plenty of time to speculate what teams might choose to do on or before April 12. The Colorado Avalanche are likely to make a move or two in an attempt to bolster their roster. They’ve cleared some salary cap room by putting Erik Johnson and Pavel Francouz on LTIR, meaning they’ll have a little flexibility to add some talent.

I’ve already covered some of the backup goalies they could look at, and I’ll be looking at some of the bigger names they could add in the next few days. But this article is all about depth guys, players that can come in and give a team just enough of a push to help them reach their full potential. Each Stanley Cup winner of the salary cap era, sans the 2018-19 St. Louis Blues, has brought in talent at the deadline, many of which being small moves that brought surprising value. The Colorado Avalanche should examine the field carefully to see if that guy is waiting for them.

The New Jersey Devils sit 12 points outside of a playoff spot and are deep in the midst of a rebuild that has yet to reap positive results. During last year’s deadline, there were rumors of the Avs targeting the Devils for a rental: Blake Coleman. However, Coleman was eventually shipped to the Tampa Bay Lightning, where he played an integral role in securing the Bolts the Stanley Cup. Now that the 2021 Deadline is approaching, Colorado might look back to New Jersey and swing a deal for Kyle Palmieri.

Palmieri is a 30-year-old winger who has scored 20+ goals in five straight seasons, including a 30-goal campaign in 2015-16. He’s only accumulated four this season (along with eight assists) but has an established scoring touch that should intrigue contending teams around the league. His contract carries a $4.65M cap hit that expires at the end of this season, meaning bring him on board wouldn’t be a long-term commitment.

The Avalanche have been able to generate plenty of chances for themselves to score. In fact, they’re one of the best in the league. But the offense has been difficult to come by, meaning they sit at third in the Honda West Division, toiling in a dog fight with several other teams to maintain playoff position. Adding a finishing talent like Palmieri could boost their goal output, as well as give Palmieri an environment he can thrive in to shake off a tough start to the year.

Colorado would likely have to part with their 2021 first-round pick to acquire Palmieri, but with their pick likely landing in the mid-to-late-20s, that’s not too high of an asking price. Palmieri would likely not re-sign with the Avalanche, as the other extensions they have to make during the offseason would leave little resources to allocate in his direction. But in the short-term, he could bring the boost that brings out their best.

Alex Iafallo is the type of guy that would mesh seamlessly with Colorado’s system. He’s fast, plays a balanced game, and contributes defensively. After going undrafted, the winger finally found a home in 2017 with the Los Angeles Kings, where he’s thrived ever since.

Despite playing on Kings teams that have struggled, Iafallo has increased his point total through each of his first three seasons and would be on pace to do so again if the 2021 season were 82 games. He also managed to remain mostly healthy; a “skill” Colorado can’t get enough of right now.

Iafallo is due for a pay raise this offseason when his two-year, $4.245M AAV contract expires. But for now, he’s a cheap option to pick up to keep flexibility for other potential moves. He’ll be a highly sought-after prize at the deadline, or at least should be, so the Avalanche may have to give up some solid value pieces to get him. A roster player like JT Compher or Tyson Jost would likely be in play, as well as a solid prospect like Alex Beaucage or even Drew Helleson.

But if there’s one guy I’d acquire at the deadline if I were general manager Joe Sakic, it’d be Iafollo. He’d instantly fit within the lineup and bolster the team on the stat sheet and on all areas of the ice. He could fit into the team’s future plans as well. There’s plenty of potential in this trade, one that Colorado should seriously consider.

The Detroit Red Wings signed this NHL veteran during the 2020 offseason in hopes he would perform well enough to attract suitors at the trade deadline. He’s done so, scoring six goals and notching seven assists to currently sit tied for third in team scoring. His production has slowed down of late, but he still remains a good deadline target for a team looking for a low-risk, high-reward move. A mid-round pick might be enough to pry him out of the Motor City.

Ryan is a career 12.2% shooter, a career that has now stretched over a decade. He’s not the player he used to be, which is to be expected, but he can still contribute to a team in need. Detroit will almost certainly move him at the deadline, and that may be to Colorado. While I think there might be better fits for them on the market, Ryan would certainly not be a bad option to pursue. Perhaps he can muster up some postseason magic again, just like he did for the Ottawa Senators in 2017.

While I don’t fully subscribe to the notion that the Avalanche are too “soft” to win in the playoffs, they do noticeably play worse against bigger teams that like to clog up the neutral zone. It was noticeable against the San Jose Sharks in 2019 and again against the Dallas Stars in 2020. Perhaps adding a little edge to their game will ultimately be what puts them over the edge.

One player the Avalanche could look to add is Sam Bennett. There’s already been speculation that Colorado and the Calgary Flames could be partners in a 3rd-line center swap. Both Bennett and the Avs’ JT Compher are not currently playing up to their potential and could benefit from a change in scenery. During his career with the Flames, Bennett has excelled in the playoffs, with a hard-nosed playing style that makes him difficult to play against in big moments. He’s got the mustache for it, as well:

Colorado is not getting enough of what they want out of Compher. They want him to be a tough, defense-first, strong-on-the-penalty-kill type of guy that he has not been able to be, particularly during the 2020-21 season. But that doesn’t mean he has no fit in the NHL, and the same goes for Bennett. They might just need some new soil to flourish in.

Finally, Avalanche could look into adding the Red Wings’ Luke Glendening. The role player has taken a spot high on Craig Custance’s and Erik Duhatschek’s trade big board (‘NHL Trade Deadline Big Board‘, The Athletic, updated 3/12/21). They had this to say about his potential as a deadline rental:

“He’s just about the perfect depth add for a team hoping to make a long playoff run. For a team high on skill but looking for an edge on their fourth line, Glendening might be the best option. He wins a ton of faceoffs and is miserable to play against.“

That’s an excellent summary of what he would bring to Colorado. With Pierre Edouard Bellemare already serving the Avalanche as a 4C, some roster shuffling would be necessary to make room for Glendening. But, a Bellemare-Glendening-Matt Calvert line would be tough to play against, the type of line a team needs to go deep into the postseason.

The Lightning acquired Barclay Goodrow at last season’s deadline to fill a bottom-six role, and a contender will acquire Glendening this season to fill a similar role. He could be potentially part of a package with goaltender Jonathan Bernier if the Avalanche and Red Wings wanted to be more efficient. But by himself, the center would cost teams a mid-round pick or a middling prospect, a fair price to pay for his services.

What skaters would you want the Avalanche to target in the next few weeks? Or should they focus on other priorities, like a goalie? There’s a lot of options to think about, and it’s a lot to sort through. So be on the lookout for the third part of this series, which is set to featuring some of the deadline’s bigger guns for sale.